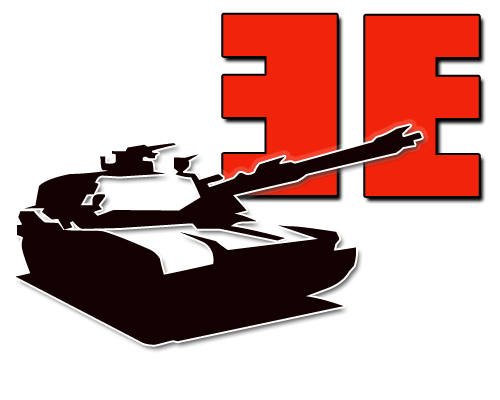 Development on E&E stopped and after some time changes to the Spring engine made it incompatible. Google_Frog fixed it to work with current Spring: EE Fixed for 0.82.6.1 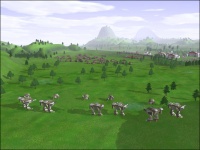 URC units outside a GD stronghold. 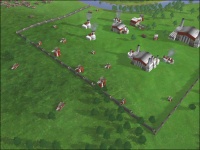 Expand and Exterminate offers three very unique and dynamic factions fighting for global domination. Each faction has its own design and fighting style that requires players to employ their own style of combat to defeat opponents. All three teams also have their own unique super weapons that offer great strategic difference. Expand and Exterminate is set in the near future that includes many futuristic and even alien-like vehicles for combat.

Expand and Exterminate is currently discontinued.

A tank force that uses brute force to push through enemies. GD uses conventional weapons like miniguns, cannon shells, and rockets along with more specialized laser and nuclear weapons. In a one on one fight, GD has the stronger units but they also have higher costs and build times. Their airforce consists of jets and helicopters. GD Unit Guide

Enforces control through walking mechanized units that use stealth and versatility to attack. URC's main weapons are plasma and rockets with both flamethrowers and cannons showing up on more specialized units. URC units are the best at climbing hills and can navigate high terrain better than any other faction. Their airforce consists of Vtols. URC Unit Guide

Utilizies heavy amounts of hovercraft and aircraft to swiftly move and attack enemies, great for raiding. They also expand quicker than the other two factions but those expansions are quite fragile. The NI use exotic weapons such as lightning, lasers and photon systems along with conventional rockets. Includes largest and strongest airforce of all three factions. (This faction is not currently available but is under active development)

Unknown force that fields bipedal and hovering ground combat units. This side is able to clone and morph many of its units to build up larger forces or advance to a new tech. They have the most powerful and most expensive units on the battlefield. They have a smaller air force than the other sides thats based on flying drones.

In this guide you will learn how to utilize the GD's greatest attribute: staying power, and minimize their weakness: lack of mobility.

GD is all about brute force; avoid your enemies' emplacements if you can, but you can likely roll right over them. Lasers are particularly good at taking down defensive turrets (as well as units).-Decimator

Most definitely. Don't forget to mix your units as well. -Shadowsage

this short guide you will explain URC's best attributes, agility and stealth.

As URC you have many options open to you in conquest. Even though I have written guidelines for a suggested play style, you can still win without using stealth and agility, its entirely up to your gameplay style. You may find that using URC as brute force works better for you, as they can operate a highly strong head on function in proper numbers. Whatever your style is, URC can probably fit into it. -Flintlock

Your increased mobility on the ground combined with stealth can give you as a URC player the option of choosing when and where you battle, a decisive point. As Flintlock said, you can essentially run successfully with any of an array of play styles. -Neddiedrow

Aliens are the newest race to enter the E&E battlezones and also one of the most unique. This quick guide should give you a heads up as to how they operate.