This page is currently being updated.

This page is an introduction for OTA players to the XTA mod for the first time.

But does work as well for new and regulars from other mods. 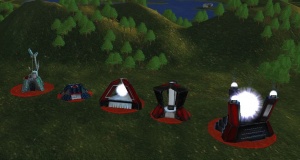 In few words, for OTA players, Do not start with the Heavy Fusion Reactor, use the Light Fusion -> Cloakable Fusions ->Heavy Fusion building path instead.

The XTA Energy tree differs from the OTA one in a few ways.

In short, several buildings and mobile units have been added "in between" the basic energy sources like solarpanels/windgenerators, and the more advanced Fusion power plant.

The three basic Energy supplies have remained the same; Wind, Tidal and Solar power. However there are some differences:

At Tech Two, XTA introduces the major changes and advantages compared to OTA.

To start with, there is a "midway" Fusion energy plant.

Here is a reference for stats delta between Arm and Core minis.

Here is a comparative view of the Cloakable and Heavy fusions.

This is an attempt to explain:

The first thing you need to know, is, Moho Metal Extractors use 300 of energy to work.

This can be justified, because of metal is a quantitative scarce resource, and a moho metal extractor, effectively quintuples the extraction rate, such marvel must come at a cost. In this case the cost, apart of the unit and tech level itself, is the need of much more power to function.

The increase in the energy use is slightly higher than x^5, with x = energy drain of level 1 metal extractor.

Units that need lots of energy to fire

Units in this list demand you keep an eye on your energy tab for using. Its recommended to get an energy storage with them, but most of them are t2, so you probably have storage by that point, if you are not rushing.

Disintegration gun, requires 350 in storage for using it.

900 energy per shot. This means you need storage for sieging properly, as its not usual you have 80% of the energy tank full.
This unit does around 2400 dps, but scattered/random non focusable damage.
At times it seems its not worth its cost (half a golliat).
Used properly, and covered, it will demolish any base, specially if you have 2.

The arm flagship, is now described as an "artillery" battle ship. 1000 e per shot.

4000 energy per shot for this massive laser weapon.

Needs 2000 energy to fire its blue laser from the head.

Other units with high energy drain

In general, many other units need a good ammount of energy to work continiously. Even when they dont require lots of energy to fire one shot, these units have high energy consumption, many times more than those big burst weapons.

It used to cost nothing to fire this beautiful unit. Now with tweaked numbers, maintaining this thing firing costs MORE energy than a core artillery does, core arty uses 112 energy per second, luger uses 143 energy per second.

All level 1 units are worth building:

All level 2 units are worth building:

Nearly all defenses were revamped:

Resource structures have changed less than other parts of the mod but the gameplay impact is very big:

Cloakable Fusions have taken the place of OTA's regular ones.