Basically OTA, or BOTA, was originally masterminded and created by Thor. Thor, like many old time OTA players, felt that the spring conversion of OTA was lackluster and sloppy at best, as Spring's lack of features at the time made it difficult to properly recreate the feel and gameplay of OTA. But instead of working to create an exact conversion of OTA, he decided to create his own mod in the flavor of OTA, calling it "Basically OTA". BOTA was first released as Version 1.0 around the same time as AA Version 1.35.

Instead of aiming to change the game's balance through things like armor classes and weapon types as Absolute Annihilation has, BOTA uses the same type universal damage stats as OTA, and instead determines unit balance through basic stats such as Hit Points, Speed, and Range. All of the units in BOTA have recieved a substantial Range and Speed increase. Also, like OTA, Missile Towers can shoot at ground, laser and ballistic weapons can hit and kill air (because of the universal damage system). Mobile Units in BOTA 1.4 also have a much greater speed and acceleration than the previous versions.

Gameplay in BOTA is based on the "War of Manuever" style of strategy. Many mobile units have a range advantage over defensive turrets. Also, level 1 units continue to be effective straight to the end of a match in many cases. Level 2 units, while more powerful than level 1, do not have a significant HP advantage over level 1 and can be overwhelmed easily by superior numbers of level 1. 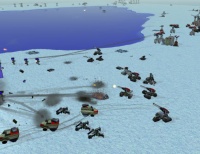 It is always best to use level 2 as a supplemental force for your level 1 grunts.

BOTA does not seek to be an exact replica of OTA. It keeps the original OTA units without adding new ones, and it does not use any Armor classes like other Spring TA mods. What BOTA seeks to do overall is to take the OTA experience and streamline it to a less convoluted form.

It is very easy to recover from a stupid mistake in BOTA unlike other mods and while the MT spam seen in OTA is still prolific, it can be worked around. Units move a bit more slowly as compared to other mods, but they also die more quickly. There is a more noticeable difference between CORE and ARM than there has in other mods. Balance is not "Mirrored" like in most games (near identical stats), but rather it emphasizes the differences between the ARM and CORE. Arm being fast maneuverable and having a strong Navy and Airforce. CORE being very powerful all around but having its greatest advantage in the late game.

BOTA also has a stronger "Arcade Game" feel to it compared to any other RTS you may play. The overall intent being to take what made OTA great and emphasize that while downplaying the more "traditional" RTS elements.

Thor ceased development with BOTA Version 1.3. Unfortunately this was also at the same time that the mod began to pick up in popularity. The mod's primary supporter, Quanto, opted to contact Thor to allow him to continue the mod where Thor left off. Thor agreed, and Quanto promptly completed BOTA Version 1.4.

BOTA Version 1.4 is the first ever Spring Mod that features the "Fire Through Friendlies" and "Friendly Fire" found in OTA. Now, more than ever, BOTA closely resembles OTA in gameplay. But as Thor had always strongly said, BOTA was never meant to be OTA, it has simply been a different take on OTA gameplay.

Future Versions of BOTA may still be completed, mainly to keep BOTA up to date with future spring versions, and also to possibly tweak its balance while still remaining faithful to Thor's Original Concept.

There is also an alternate Beta Version that is Open for tryouts, it is a quick preview of what is in store for the future BOTA releases and features massive graphical improvements (by BOTA standards).

Where is BOTA going now?

At this point BOTA has reached a happy medium balance wise, there isn't a "Sure-fire" way to win no matter how many times you play. And new players will be happy to discover new tactics with every game they play.

BOTA's development will probably focus on a more streamlined feel and bug fixing. At this point, many of the new unit models are slightly buggy COB wise, and this will be corrected when Quanto get's off his lazy ass. A proper LUA interface is in order along with proper LUA mod options to be included for the latest spring version. The final version of 1.6 may still be a long way off, but at this point the gameplay is where it should be.