No longer in development

Absolute Annihilation's development has officially ceased as of January 30, 2007.

Caydr has made a claim that he is infact developing this and he will start again soon. 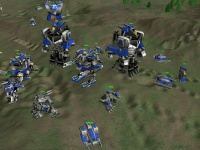 A few of the larger units in AA

With 366 balanced units, Absolute Annihilation, or AA, was the single most-downloaded Total Annihilation units pack. AA has been ported to Spring soon after Spring's development began in earnest and takes advantage of many of the engine's new features. It is based on UberHack and so attempts to improve TA balance without radically changing gameplay. However, whereas UberHack added only a few extra units, AA incorporates many new units including some of the most impressive new units concocted by the ever-creative TA community.

AA was under constant development until autumn of 2006, spurred on by its highly active community following, and Caydr, who headed up development. Some units were subject to frequent and sometimes brutal tweaking and pruning, leading many players to feel that the changes were random - in fact, they were simply based on feedback sent through mediums besides the forum. AA contained new factories, units, resource buildings, sneaky defensive structures and an array of massive "experimental" units for brutalizing the enemy's base.

now fill new roles, while some are more (or less) effective than they were in classic TA as of the 3.1c patch.

AA:Spring is based mostly on version 6.0 of the OTA AA mod.

Absolute Annihilation is a modification of TA. Therefore, the same basic strategies and tactics that good TA players utilize are also utilized by good AA players. Although AA is a very complex modification, some important points to remember are:

The actual units present in AA aren't so important; it takes little time to learn what they all do. The key to victory lies in utilizing them effectively. Always keep the above points in mind when playing, and above all, practice. Even if you lose, ask the person to whom you lost what you did wrong and right. Study replays involving experienced players to see what tricks they use.

For further information go to the AA Strategy Guide.

At the height of AA's popularity, Caydr finished his education and became a machinist. His job and other aspects of real life occupied so much of his time that he became completely out of touch with the AA community for several months, not even realizing that a silly little typo bug, easily fixed, had basically destroyed gameplay for months on end. This prompted others to try to fill his shoes, some successfully, some unsuccessfully. A new mod, "Balanced Annihilation", at first incorporating only minor changes with great gameplay fixes, slowly began to eat away at AA's previously untouchable popularity.

When Caydr finally got some time off during the end of December 2006, he finally discovered what a shambles he'd left AA in due to failing to quickly fix several major problems in the last released version, 2.22. He realized that this state of affairs was obviously an indicator that he would not longer be able to responsibly remain the main developer of AA, and decided to let AA finally slip away. Giving his blessing to those who continued the work in his stead, he posted one last message on his website, http://www.caydr.com, and hasn't been heard from since.