very_bad_soldier wrote: ↑
19 Apr 2019, 22:58
Would you at least stop joining every forum thread remotely related to BA and flooding it with your toxicity?


Just as soon as you and others publicly apologize for the lies. Otherwise, suck my massive botflag. I invented the botflag, FYI.

I also bathe in the hot blooded mantears of BA players.
1 x
Top

It was suggested by you with the agreement of Flow as a means of control for ba devs over two years ago in this discord conversation dated 16/02/2017.

What started as an infrastructure change to let gamedevs control players escalated into a means for engine devs to ban entire engines. 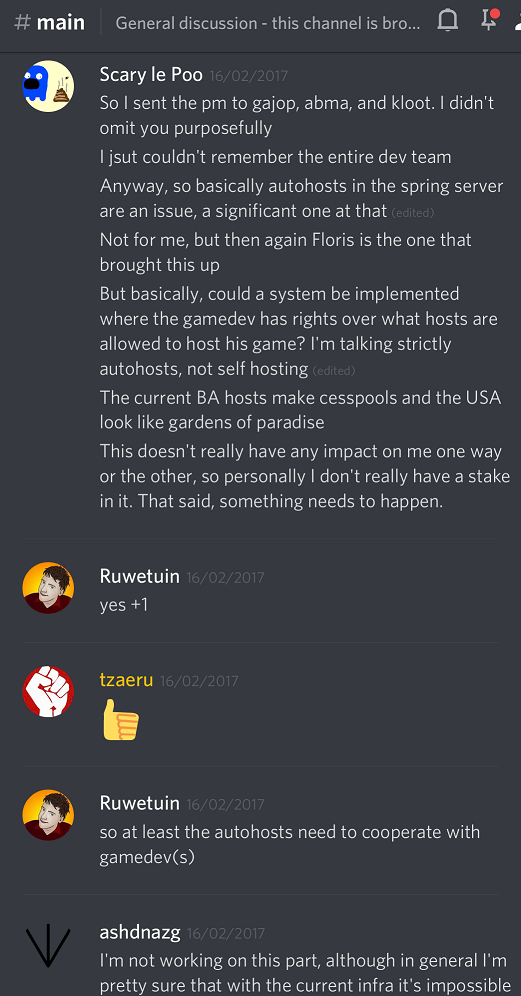 Christ... Where do I even begin? First off, botflags have been a thing for... 10 years?

Second, you think that that conversation was a catalyst for this? Holy shit. I mean, it's so wrong that I'm literally sitting here with my mouth hanging open.

Games using old engines has long been an issue on the engine devs radar. In large part, you and the BA community are the ones who gave the engine devs the opening they needed to enforce this. Of you guys hadn't made such a stink and polluted the water with your whining, your lies, and your toxic behavior, this likely never would have happened.

That said, gamedevs need a way to control autohosts. Autohosts owners have proven that they will not police themselves and spectating a single BA game is enough to turn the stomach of any decent human being. You and the people like you have sealed your image of toxic sludge as a result of your own actions. The fact that you don't understand this further proves the point.

Back to the screenshot... Yes, I asked that question and supported the sentiment, but I never lobbied for it. Not with any ferocity. I would merely give my opinion and move on. That said, I know who did lobby very hard for this, and it wasn't me lol. See, regardless of what you think, I simply don't care. I enjoy trolling you because you're like knorke Jr. Diet knorke if you will: all of the nastiness, none of the usefulness (knorke is very talented, unfortunately he's also a botflag).

So when the removal of 103 and previous was announced, it took me by probably more surprise than it did you. That said, I tentatively support it. But you aren't taking into account that it affects me too. See, Evo currently cannot properly function on 104+ because cloak was changed, and I can't seem to figure out how to fix it. You may not realize it but until recently Evo consists mainly of just me. Recently Damgam got into it, but mostly his work has focused on helping me with unitdefs, music playerand he has created DAI, as well as some other stuff. Commonplayer has mostly worked on UI stuff, some really amazing work, and Floris' has helped a ton with UI stuff and suggestions and commits, but none of them work on core gameplay stuffs, that part is all me (usually, however sometimes common helps me with specific things, like the random mex spots placement and some other stuff like that, however, in general this statement is factual). Which means if I hit a problem I can't solve, I'm genuinely fucked.

Getting Evo off of 96 was very difficult, and I needed a lot of help. Thankfully, abma spent an afternoon helping me and pretty soon it was on 104. So the problem you are facing now is one that I have faced repeatedly over the years. However, your game will still be able to use 103, just with only 4v4, boo hoo. At one point I couldn't even host Evo because it wasn't ready for the new engine, back in the old days where the version was enforced just to log into the lobby.


So suffice it to say, I suggest you get on your knees and start sucking some botflag in exchange for help as I and others have done in the past. In many cases I have tried to Foster community relations among the various gamedevs for spring projects. Evo, myself and others could have been allies to BA, but instead you chose to use me as a scapegoat for every you didn't like, all the while making up lies, slandering, attributing things to me that I had nothing to do with, now it's blowing up in your face.

And then you respond with that glorious post above, which cuts through all of your bs and shows what you truly think. The problem is, all of your hatred, lies, etc is all based on an assumption that isn't even remotely accurate. This is what happens when you reach a conclusion and then force the evidence to fit that narrative. You are leading the evidence where you want it to go, not following it where it leads.

At this point, I pity you more than I detest you. All that rage, and it isn't even directed at the right person. It's honestly pretty funny to me.
1 x
Top

I didn't see hosting restrictions before 9.46

These are two completely separate things.

Moreover, hosting restrictions have always existed. At some point, the player limit was lifted to either 16 or 32 players from 8. At the time, this change was widely credited with killing off the majority of the community.
0 x
Top

This misinformation has been repeated too often, so, public information broadcast:

Botflags existed in the server code for around a decade. Their original role, which they still have, was to mark a responsible user who had access to extra bandwidth, beyond the usual flood limits (= a "trusted" bot). For a long time, it was possible to run a large autohost without one (=without asking lobby moderators), but it was a bad idea and no-one did, because the host would hit the flood limits and then respond slowly when under load.

The requirement that hosts with a botflag should "maintain an environment in which users are able to play games, free from serious disruption and excessively hateful or obscene behavior" was added by moderators in summer 2017 (=myself, abma, gajop, flozi). This was done in response to large numbers of complaints from players about the standards of players and hosts behaviour within particular autohosts. A size limit was added for hosts without a botflag.

This is false. What is true: a group of BA10 developers did ask (in December 2017, iirc) that botflag removal be used to "ban" specifically BA9.46 hosts and this request was refused.

A proposal that shared game-engine version control, in some as yet unknown way, between affected devs and players would have been (and still could be) considered, but no request/suggestion for this was ever made.


... into a means for engine devs to ban entire engines

This is correct. The engine developers built, maintain and own Springs infrastructure, and consequently they have the final say over what it is used for, regardless of which name / flag / mechanism is chosen to enforce it with.

Active games were always expected to use a reasonably recent engine version, and if they didn't (without good reason) they were put under heavy pressure through "soft" means. For the new decision by engine devs that a minimal engine version should become a "hard" non-negotiable requirement for hosts with a botflag, see viewtopic.php?f=38&t=39277&start=20#p590616 and following posts.
8 x
Top
Locked
6 posts • Page 1 of 1