Unfortunately, this seems to be the only way to contact Bibim. So ban-dodging, against my nature for the hopeful betterment of whatever.

Now that that is out of the way. I will try to nutshell what I need.

User was warned for this post, felony 7. Do not attempt to dodge bans. (Silentwings)
0 x
Top

You haven't said who you tried to help ban dodge, but do not, https://springrts.com/wiki/Felony#7.

At a guess, based on the writing style, it might be Forboding Angel. If so, afaict, he is not currently banned, so I am not sure wtf you thought you were doing here.

Unfortunately, this seems to be the only way to contact Bibim.

Whoever it was, they didn't try very hard. https://github.com/Yaribz/SPADS gives an email addess and an issue tracker which can be used to contact bibim.
1 x
Top 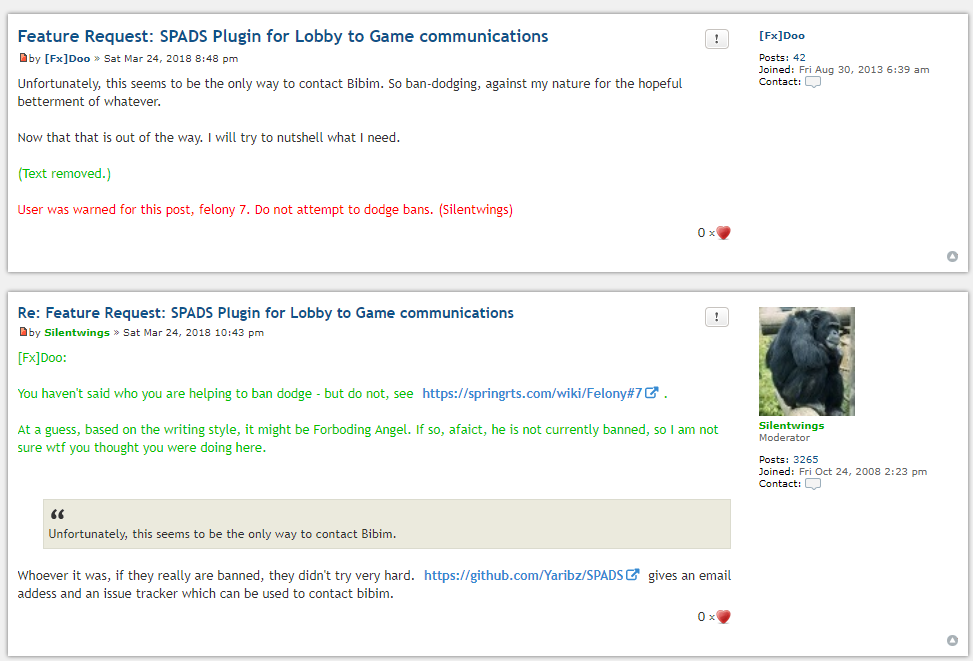 No, of course I didn't try hard. I didn't want to bodge a ban. Something that has caused quite a bit of strife in the BA discord, because I refused to ban dodge and forced them to make posts in order to get help from Bibim with spads. I even tried to report my own post to make admin aware of it (forum wouldn't let me report myself-request timed out when I tried). I thought you might be capable of a little bit of empathy in the fact that the only good way to get in contact with bibim is these forums and allow the post to stand, as the intent was clear and the cause reasonably noble. But nope, I forgot. It is you after all. I shouldn't really be surprised.

There is a screenshot in the BA discord somewhere that I took of when I tried to log into these forums. I was banned From november (8th?) 2017 (I'm grabbing this date because november 8th was the last forum warning email that I got), until June 6th, 2018. I thought it was a little heavy handed, but wasn't particularly worried about it. *he who shall not be named* has been pretty rampant about abusing his power (splitting threads in order to steer conversation the way he wants it to go, reinterpreting rules to force them to fit perceived forum crimes against humanity, etc), so whatever, it's the new spring meta. The admins seem content to turn a blind eye to it, so what's the point?

And then... All of a sudden, I'm able to log in again. I find that interesting. Did someone slip a finger and hit the "fuck you twice" button instead of the "fuck you once" button?

Regardless, if I wasn't "ban dodging" then it seems a little suspicious that you would remove the text of the post. I'm not directly accusing you of anything, however, it is completely in line with your character. I feel that other people should know the whole truth. Not just what you put out there.

Re: Setting the record straight

I was banned From november (8th?) 2017 (I'm grabbing this date because november 8th was the last forum warning email that I got), until June 6th, 2018

Apologies, originally entered the wrong date (different format for different countries, 1/6 vs 6/1) and corrected it when I realized. You have been able to login since January 11th, afaik, and also according to the moderation logs.

If you were sent an automated message with the wrong date, after Jan 11th, that would be a serious bug in phpbb and you should report it.


if I wasn't "ban dodging" then it seems a little suspicious that you would remove the text of the post.

As you know, I pm'ed both yourself (and doo, and the new account) with a link containing the raw text. I didn't want to make someone re-type a long feature request, or have it obscured by moderation activity.


*he who shall not be named*

I generally assume that reading/absorbing an amount of personal criticism is part of moderation - providing your criticism does not simply descend into profanity, there is no need to hide it behind asterisks.

Re: Setting the record straight

Thank you for that. However, I have little intention of posting here much, if at all. You are particularly good at antagonizing me with your ability to just barely skirt the brim of forum ethics. Whenever you go against someone who has the ultimate ability to silence you, you will lose. I know that, but I still tried. This will (hopefully, with any kind of luck) be the last time that I speak to or address you directly, so antagonize away. I won't be around to read it.
0 x
Top
Post Reply
5 posts • Page 1 of 1