Hi folks, let me present you my new concept. Texture based on NASA images from Mars missions. Now with features like geovents and reclaimables! Designed f.e. for BA 3v3 games. Enjoy! Mars Surface from NASA/HiRISE latest releases, up to 3v3, enjoy! ~by PtaQ", v2:

- mexes are easier to build now

Looks great.
I like the idea of the obvious choke points.
I wonder about start positions.
Are the NASA images free to use?
Maybe the small crater NE&SW of the big one could be raised a bit and the hill on the sides around 2/5th of the length too. That would create terrain for a little hiding/skirmishing.
0 x
Top

An updated version is comming in minutes. I will add proper startpos, fix metal spots and add some features like rocks and geos most likely. Some heightmap features are to be exaggerated too, as you pointed out.

I really recommend HiRISE project pictures, they got great resolutions and some even have symmetry. About Images license:

All of the images produced by HiRISE and accessible on this site are within the public domain: there are no restrictions on their usage by anyone in the public, including news or science organizations.

Upload your map on springfiles, and use the versioning built into springfiles so that hosts can automatically use it.

To use featureplacer + spring features, in your map's modinfo, on the depend line, make it look like this:
depend = {"Map Helper v1", "Spring Features v1.9"},

Featureplacer must be loaded up in engine version 96.0.
0 x
Top

I downloaded it from springfiles and was going to start the game but this happened instead: 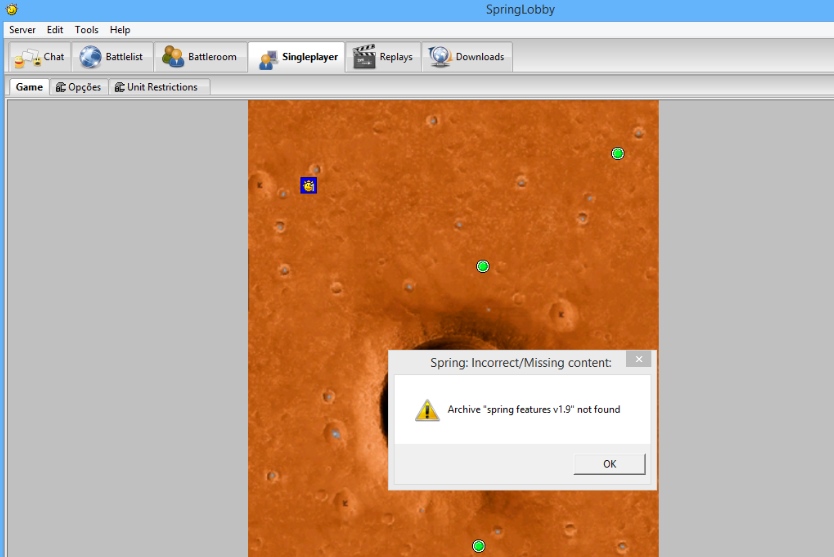 I can fix it for myself, but when trying to get new people to play a game, featuring maps with external dependencies is asking for trouble. Imo they should be avoided.

sl_missing_dependency_error.jpg
archive sf 1.9 not found
(104.73 KiB) Not downloaded yet

It's a one time dependency need. SF rarely changes.

He was talking about springlobby. I had this problem, too (also with other maps having springfiles dependency).
This means you exclude a part of the community from playing these maps. One time download or not doesn't matter, since average player will probably not know how or care how rapid download works but just switch to another map.
0 x
Top

Or the lobbies could just download the dependency.
0 x
Top

Would of course be nice if springlobby would do it automatically, but status of now is that it doesn't. So if you want your map to be playable by all players, I can only conlcude: don't use springfiles dependecy in maps (until this works). If you don't care if all players will be able play it, use it.
0 x
Top

Game dependencies always work for lobby downloads. It would make a lot of sense to lobby your favorite game to include it as a dependency.

we should try to minimize the possibility of players having issues while trying to play.

One could argue that making more maps with SF dependency and forcing people to deal with the issues would create pressure for the devs to resolve that dependency, but the issues would help drive new players away, and that's one of our main problems: lack of players.

Is there a way to bundle SF with maps? If it could, the community could bypass the issue without having to go modify existing software by embedding it on the maps (or a gutted version of it with only the required features).

we should try to minimize the possibility of players having issues while trying to play.

Regarding the pragmatic approach:
Picking the features you want and embed them into your map is IMHO not a very big hassle. You have to copy the definitions anyway into your map to adjust them to your liking (standard values are mostly not what you want). Copying a few models and textures in addition never bothered me too much.

As I see it, pressure on devs would only work if there was more manpower. Currently it's very very low anyway. We had this discussion many times before, so I guess situation will not change in the near future.
Good thing with latest BA is, that it has SF anyway as dependency and automatic download works there. So one more community that's covered. As far as I know there are also no problems with ZK and EVO.
1 x
Top

But commenting on the map: very nice diffuse texture. Layout could be fun, but I wasn't able to play a real game on it so I can't say for sure

One thing I noticed: the heightmap of the craters around metal spots should be adjusted so that you can easily build 2nd level BA metal extractors on them. For some it's tricky and I spottetd one or two where it was impossible.
0 x
Top

The mex spots are not flat so mexes clip into the terrain: The map texture is missing. Toggling advmapshading did nothing: Rocks have no reclaim value: There is something invisible to reclaim here: Now for some feedback. I like this style of map, these things stand out for me: There is a bit of inconsistency with the terrain on the flat areas of the map. The left side of the crater have a sort of river effect while the other parts are completely flat: I think it would look better to have subtle slopes/texture across the entirety of the flat areas.

There is metal imbalance. The bottom of the map has 36 metal while the top only has 34. This is even when I give the middle mex on the right side of the map to the top team. This disparity is mostly due to the circled and squared mexes. Also something to consider is whether the +0.3 and +0.5 mexes are even worth building.
0 x
Top

Sorry for the delay, there is a version of the map with most of these things fixed. I forgot to put the new link here.

This one should be more smoothly playable. See the list of fixes:

- mexes are easier to build now

I am working on another bigger project for ~6v6 now, when I finish it I will make v4 too, which might be final. I checked it for BA playability and it works just fine, being a little bit too restrictive in terms of units (rocks + hills make it kbot only map for BA).
0 x
Top

suggestions:
- change texture to highlight the slopes outside of the crater more (namely the hills on north and south)
- reduce contrast on the inner crater slopes: currently it's too dark
- use rounder metal spots in the center, similar to the rest but bigger or "shinier" (the current ones look stretched)
- make the rock textures a bit more orange so they fit better into the map
- increase map hardness a bit, ground deforms too easily
0 x
Top

Thanks to all for your feedback, it's the first map I've made after yearz of not making maps. It needs a few tweaks still and I will make them soon. I'm also thinking of making the ccr-like version soon (triple the original size) by expanding it to the west and to the east and making startpos east and west too. For this I need your suggestions guys. What should I put on the new ground? More hills? Flat lands? Any new craters? I have quite a library of materials for that so feel free to give me your wildest ideas.
0 x
Top
Post Reply
18 posts • Page 1 of 1