I'll pin a link to it in the evo discord and the spring discord.
Top

Thanks, I added the discord links to the website's community section.

- level 2 robot, vehicle, aircraft and ship factories can now build some of the level 1 units of the corresponding type

- increased model size and improved the trails of advanced missiles

- added a simple concrete-style ground decal below buildings
- fixed an issue with 3d model faces not being rendered on some ships on spring 103.0 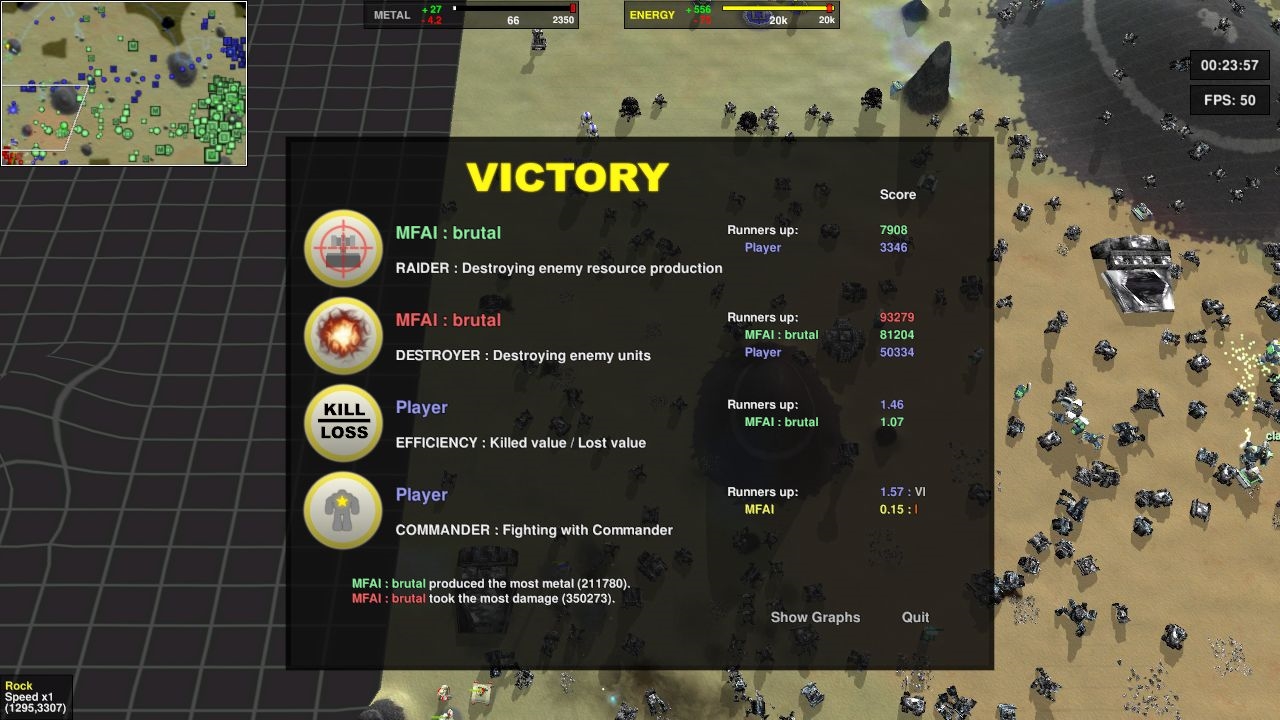 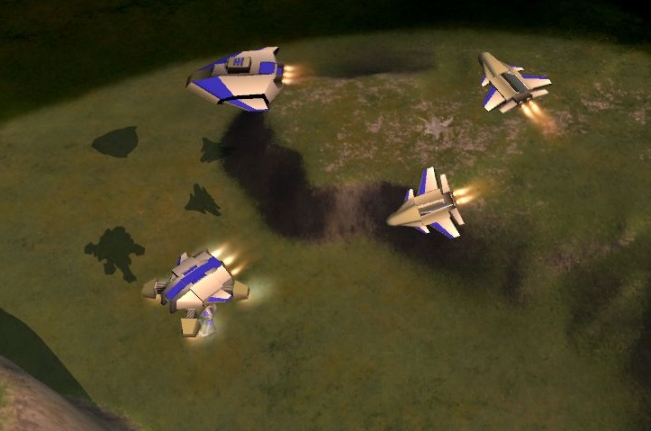 - fixed collision volumes for many units, mainly for robots which had volumes shorter than their actual height
- fixed a serious issue introduced in 0.974 that made SPHERE shielded units' collision volume flat when shields were down
- fixed GEAR "Toaster"'s collision volume and aim point inconsistency when under construction

- reduced the transparency on projectiles from some weapons, namely EMG
- AVEN Dervish, Magnum and Racer had their "Plasma Cannon" weapons changed to "Plasma Bolt", with different impact sound and projectile
- added trail for long range plasma cannon shots
- modified rocket trails for better consistency, and to make smaller rockets less expensive in terms of performance
- made fire area effects simpler to make them less expensive in terms of performance

- added bloom shader widget (by Kloot) : maybe makes game look better (adds blur/glow) but comes with a performance cost
(experimental : it's disabled by default, can be enabled through the widgets menu - F11 key)

- show awards for players when the game ends

- cleanup of deprecated weapon definition tags and categories that caused warnings on the infolog.txt 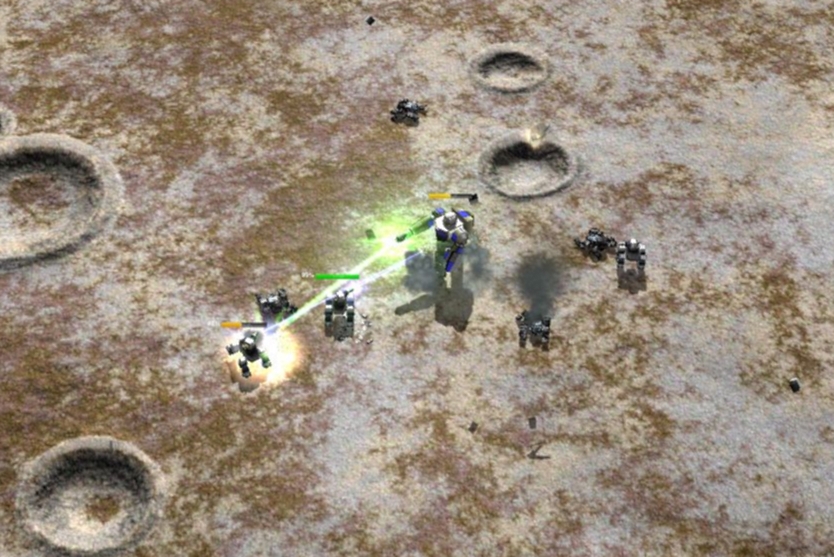 commander_gamma.jpg
(361.75 KiB) Not downloaded yet 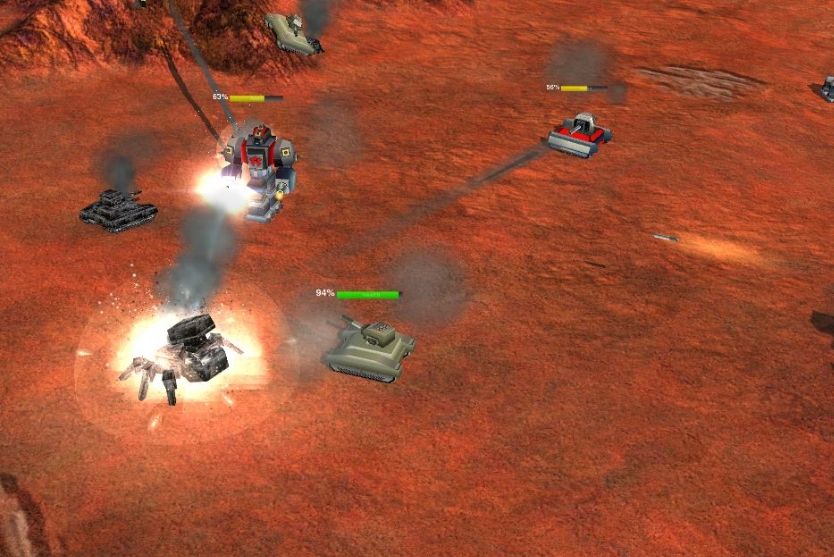 - made aircraft drop wreckage parts when destroyed amounting to 40% of their metal value, same as other units (excludes commander drones)

I've made significant changes to the website, now there's a dropdown menus for easier navigation, link to the replays site and a new page with 1v1 rankings and player profiles.

It tracks games made on the nebula hosts only.

- show effects when half-built units are destroyed or canceled

- slightly lowered the minimum experience required for the COMMANDER award
- fixed the way the EFFICIENCY award is calculated (it was counting morphing, reclaimed units and upgrades as losses)
Top

I've added "Type "!promote" to call more players." to the autohosts' welcome message and made some infrastructure changes.

Now whenever someone uses "!promote", a message will appear on the MF discord channel! 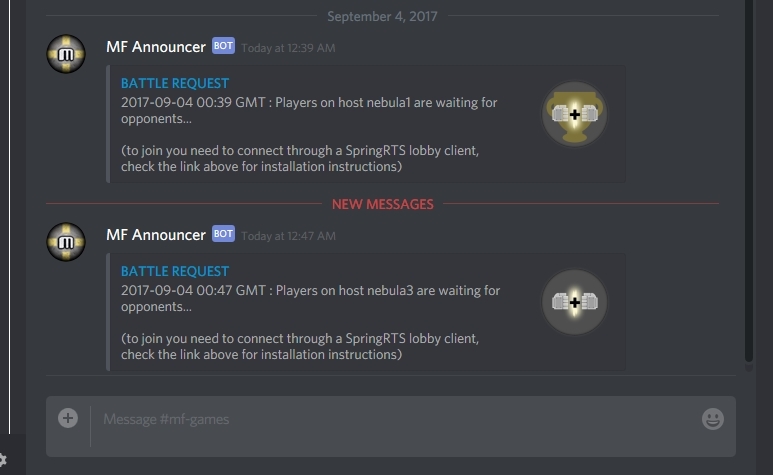 mf_announcer_promote.jpg
announcements triggered by !promote
(102.15 KiB) Not downloaded yet

That is EPIC! I can haz epicbot? That is an amazing tool for games with a small playerbase.
Top

It's not a real discord BOT, it's a simple bash script that runs a check on the spads battle room logs every 10s and sends http requests to a discord url (check attachment).

First you need to create a discord webhook. On discord click on "edit channel" > "webhooks" for the channel you want, then define the webhook.

Then you can send http POST requests to that url with json data and they'll show up on the channel. I found an example request here:
https://meta.discourse.org/t/has-any-on ... cord/51785
Top

i've added a slideshow with screenshots to the website
http://www.metalfactions.pt/index.html#screenshots

and updated the community section of the website with more information about the 1v1 ladder rules
http://www.metalfactions.pt/community.html
Top 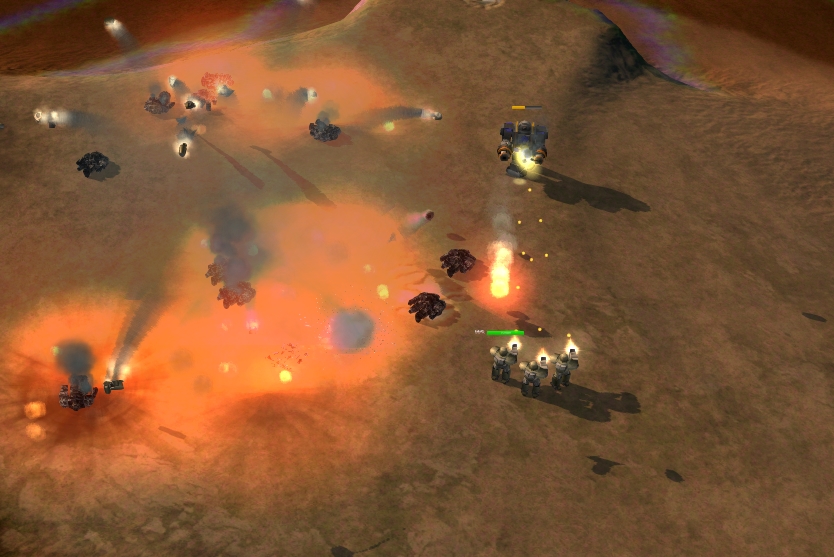 - modified GEAR "Infernal Form" commander : now has two fireball launchers instead of a fireball/cannon combination and moves about 15% faster

- reduced speed and cost of most commander drones 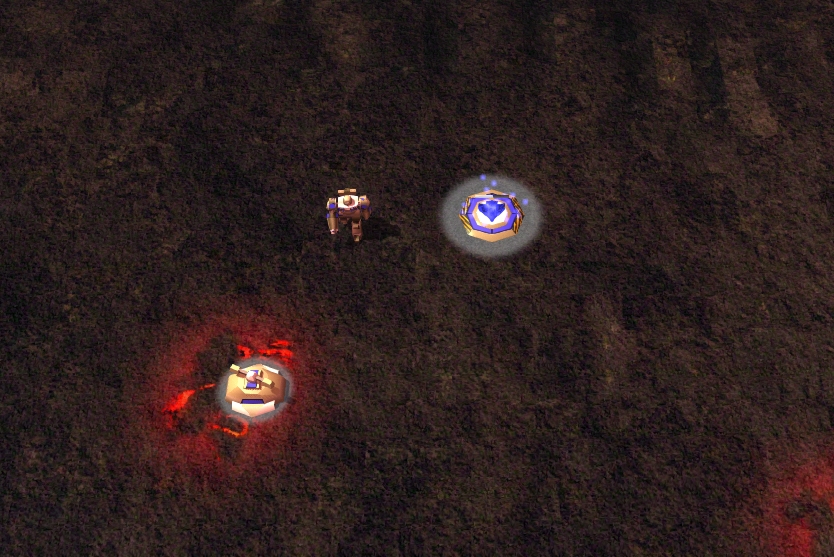 - fixed bug that caused a crash when trying to start single player games through weblobby or directly through the spring engine binary
(didn't happen when using springlobby, though)

- added scout pads for all factions : cheap level 1 buildings that build air scouts
(this is to discourage some rushes and early blind rock-paper-scissors gameplay)

COMMANDER DRONES
- reduced the cost of commander drones by 30%
- commander drones are now automatically destroyed if they somehow stray too far from the commander (twice as far as the retreat range, or about 1200)
- intelligence drones got even cheaper and drain 75 instead of 90 E/s but radar/sonar range was reduced from 1300/1100 to 1100/900
- light drones evened out across factions, weapon's base DPS was set to 50 (up from 35 and 44 DPS)
- medium drones changed: AVEN's a bit faster and deals more damage at shorter range, SPHERE's tougher but slower and got its weapon range slightly reduced

RESOURCES
- reduced relative metal extraction multiplier for moho mines and exploiters from x3 to x2.5
- metal extractors and moho mines are now about 20% more expensive
- made metal extractors a bit tougher (from 300-500HP to 450-580HP)
- exploiters extract the same amount of metal as moho mines (was 93%) but increased energy drain from 80/s to 90/s
(this is meant to increase the payback times of rushing resource production, make exploiters more attractive and reward raiding more)
- removed energy income/cost from units that produce or drain less than 3 metal/s when moving

- updated upgrades' description to display their MINOR, COMMANDER or MAJOR type
- show message when construction orders for upgrades are denied because either own or type limit was reached
- removed white outline from the shield values on the tooltip 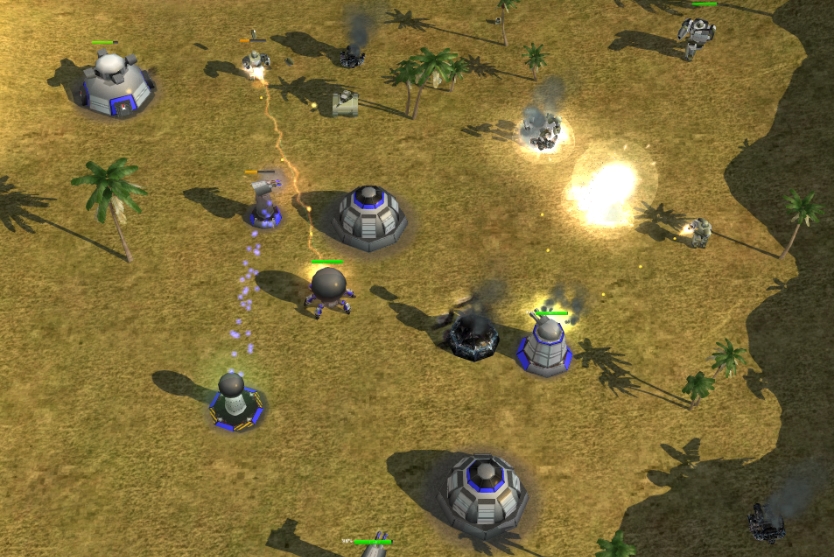 - changed SpringRTS engine version compatiblity and requirement from 103.0 to 104.0

MOVEMENT
- enabled "raw movement" (requires springRTS engine 104.0)
(this means units are more likely to travel in a straight line over short distances if they can)

COMMANDERS
- improved overall combat attributes of most AVEN, GEAR and CLAW commanders by about 10-15%
(they're no longer being overvalued relative to SPHERE commanders due to their cloaking ability)
- improved the relative balance between the underwater and surface weapons (underwater weapon is generally worth half as much on all commanders)
- reduced range by 6%, increased DPS by 12% but doubled the energy consumption for the unmorphed SPHERE commander's beam
- fixed issues when trying to aim the torpedo weapon while underwater (affected several AVEN and GEAR commanders)


OTHER
- fixed aiming delays that made most fast firing weapons (emg, miniguns, continuous beams) deal 10-20% less damage per second than expected
(this happened while maneuvering or against mobile targets even if they were still within tolerance)
- fixed units with torpedoes trying to target enemy aircraft


CLAW Spinbots and some of the other amphibious units... 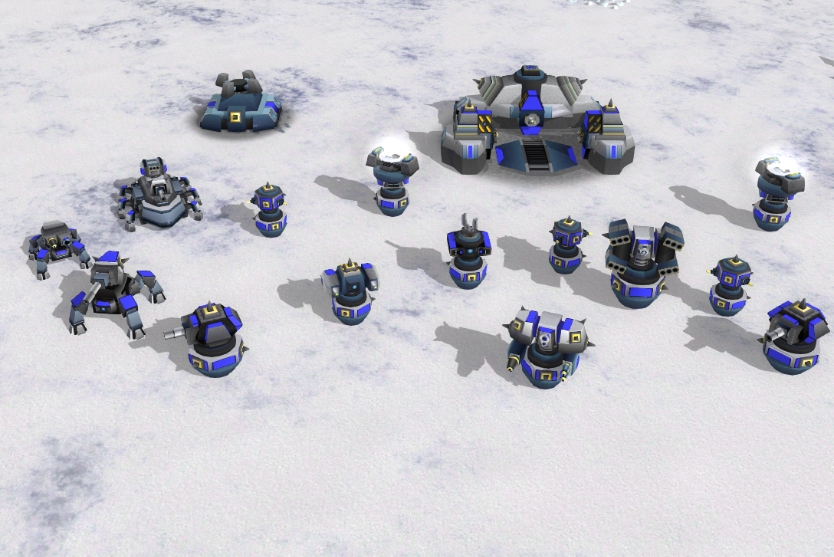 A Magnetar and a squad of Nimbus hold an area. Comet passing by while moving to raid some unfortunate enemies... 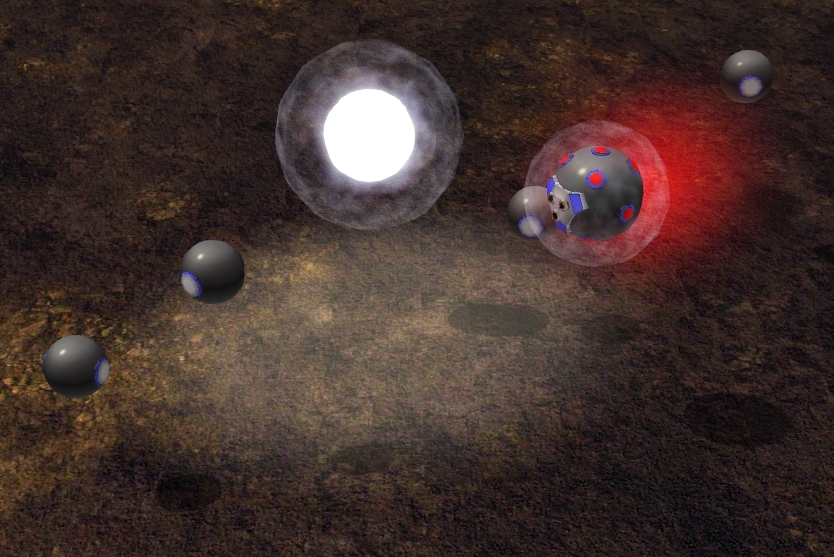 - removed aircraft-specific cost modifiers : they now cost about 7% more metal but about half as much energy
(they now have their energy cost set to 5x the amount of their metal cost instead of x10, like ground units and buildings)

- increased cost of level 2 air transports by about 10%

- made most heavy tanks amphibious

- unit mass now calculated to also scale with unit hp instead of metal cost, and air units are lighter
(this affects transportability and impulse from being hit)

- increased the DPS level 1 land scout units by about 20%

- increased the size, HP of battleships and main gun DPS by about 20%, but reduced their speed by about 40%

- SPHERE "Magnetar" now regenerates 100HP/s and has radar jammer and a toggleable aura that pulls deals up to 150(L) disruptor dmg/s within 300 range, but doubled the reload time on the disruptor blast and increased cost by 20%
- reduced speed of SPHERE "Chub" by 10%
- SHPERE construction sphere regenerates 30 HP/s
- reduced E cost to move for SPHERE construction sphere, Astra and Gazer from 150 to 120 E/s
- SPHERE sphere factory can build level 1 construction aircraft

- tooltip shows mass and transportability "light", "heavy" or "no transport" status for mobile units
- groups of units will try to converge near the point when given non-unit point targets as the auto-formation wasn't working properly
(it's generally recommended to click-drag when giving orders so units spread out along the lines)

spinbots.jpg
Stuff
(367.8 KiB) Not downloaded yet

Same links as the previous one. 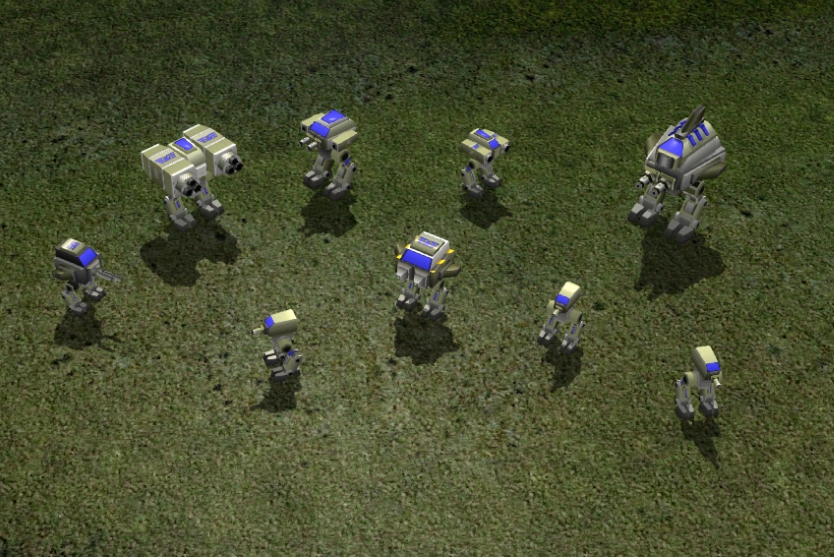 - fixed scaling of collision volumes for units under construction and aircraft

runner_bots.jpg
birdies
(437.72 KiB) Not downloaded yet