Subforum for the organization and gathering of competitive players to talk about the opportunities for competitive play. Post all tournaments notifications here.
Post Reply
18 posts • Page 1 of 1

Why is annoying about tourneys?
Because prize money gone and all players afk.
So here is a new form of competive play.

You are playing 1v1 BA on your favorite map: Bluebend.
It is a hard fight, the base is gone and only your com could escape to some corner. Meanwhile the enemy is ecoing all over the map. Just when you want to "GG" the chat goes *boing* and you read:
ProStyleEco paused the game.
ProStyleEco: brb toilet 10min pause pls
Now is your chance.
Unpause the game and do as much damage as you can, before opponent returns from business. 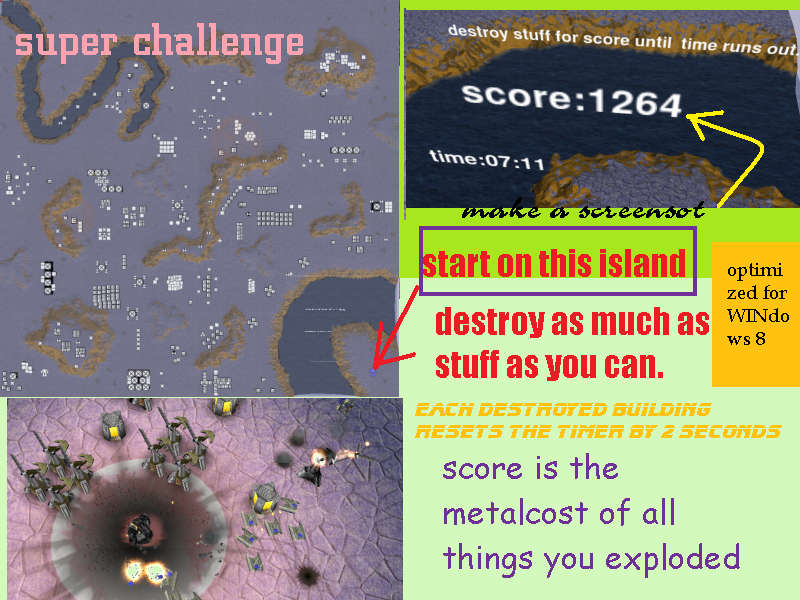 you must start on the island in bottom right

if you select the map in spring.exe, that is already correctly set up

Rules:
play map as decribed above
post screenshot of your score+attach replay
no cheating (using the enemy com, sharing units to gaia to destroy them etc)
-Each destroyed enemy building increases your score its the metalcost.
-Each destroyed building also adds 2 seconds to the 10 minute timer.
-score and timer are shown as fancy 3d text next to the start island

I am not sure if there is interesst for this kind of thing but maybe worth a try.
0 x
Top

I think this is great idea and I may borrow it for one of the BAR missions!
0 x
Top

Beherith got a perfect score but he said it was with cheating. So it is invalid

/globallos cheat is ok to look at map but even after turning it off the buildings remain visible as ghosts..so after using it, start a new game.
Also no replay = did not happen.

Can we have a similar challenge with xta?
0 x
Top

Add a gadget to prevent sharing so that the rule is null and void.
0 x
Top

If people want to cheat there are so many ways, so the requirement to upload the replay. Idea was that the replay would also be interessting to look at but hm.
But yes, generally it could be more polished like that..this was just quick test.

Yes, can make one.
But will wait a bit to see what kind of problems there are etc.
Imo this kind of "mission" in a map should be much easier to use than for example zK's missions.
When not using zkl one must download the mission archive and a script.txt and then know how to use the script etc. On other hand this can be started like a normal game.
0 x
Top

Knorke, you should require infolog as well so you can check for cheaters.

This is a really awesome idea!
0 x
Top

An infolog is trivial to doctor, a demo not so much.
0 x
Top

Constantly spams the chat with that on every frame. And no score visible.

Also it seems relatively easy to get maximum score, when you constantly get more time with killing things.
0 x
Top

hm thanks.
Seems it does not work with spring-multithreaded.


Also it seems relatively easy to get maximum score, when you constantly get more time with killing things.

i was not sure about balance because my mouse was bit broken so could not really test. might have made it too easy...
0 x
Top

Ok, switched to non-mt and it works. I was well on my way to clearing the map on the first try, then suddenly every enemy but the nullai blows up since my dudes found the white comm and killed him.

There's so little AA on the map that gunships can easily kill everything, and nicely reclaim everything too with air.
0 x
Top

then suddenly every enemy but the nullai blows up since my dudes found the white comm and killed him.

The white comm is spawned by BA and BA also ends the game when he explodes.
Will see how that can be overruled (have some ideas)


There's so little AA on the map that gunships can easily kill everything, and nicely reclaim everything too with air.

But it is not nessecarily bad, or is it? Imagine the map/time limit was overall more difficult and not everyone would manage perfect score.
0 x
Top

imagine having 2 players instead of one, rushing to get most damage done, could be like a king of the hill style mode, but this time its KING OF DAMAGE xD
0 x
Top

I'd like to do one of these for evo just for the hell of it assuming you don't mind. Do you have some easy way of outputting the unit list?
0 x
Top

sorry for late reply.
I was making version with better balance and fixed for MT.
Somehow I lost it

Had a power failure due to blown fuse and maybe that it was that but just as likely could be accidently deleting it:roll:

But it is not forgotten: Just need some time before feel like doing the same thing a second time.


Forboding Angel wrote:I'd like to do one of these for evo just for the hell of it assuming you don't mind. Do you have some easy way of outputting the unit list?

Yes, anyone is free to make variants for other games. Maybe wait for working MT version so it is a bit easier.
Or better use the various mission systems that some games (zk, kp, xta,others?) have, compared to that this maps Lua is fairly primitive and kinda too trivial to steal.

For example I just used /cheat /nocost to place the units and stupid widget to make a list. It was silly like all(?) other save-units thingys with its long lines of x=x..","..bla=.."\t("..y to get formated output, not Lua enought! Now I made a bit better but not done and will maybe add unitcommands too.

Featureplacer will output unit lists. Perhaps the gadget could be made to read fp syntax so that you could output it and just copy and paste.
0 x
Top
Post Reply
18 posts • Page 1 of 1