For the discussion of infrastructure improvements and changes.

Can something be done about that?
Most spam seems to come from human spammers btw, they post loosely related crap and then later edit the posts to include links to their sites. More on that here: http://springrts.com/phpbb/viewtopic.php?f=10&t=26008

If you do not believe it just look at this: 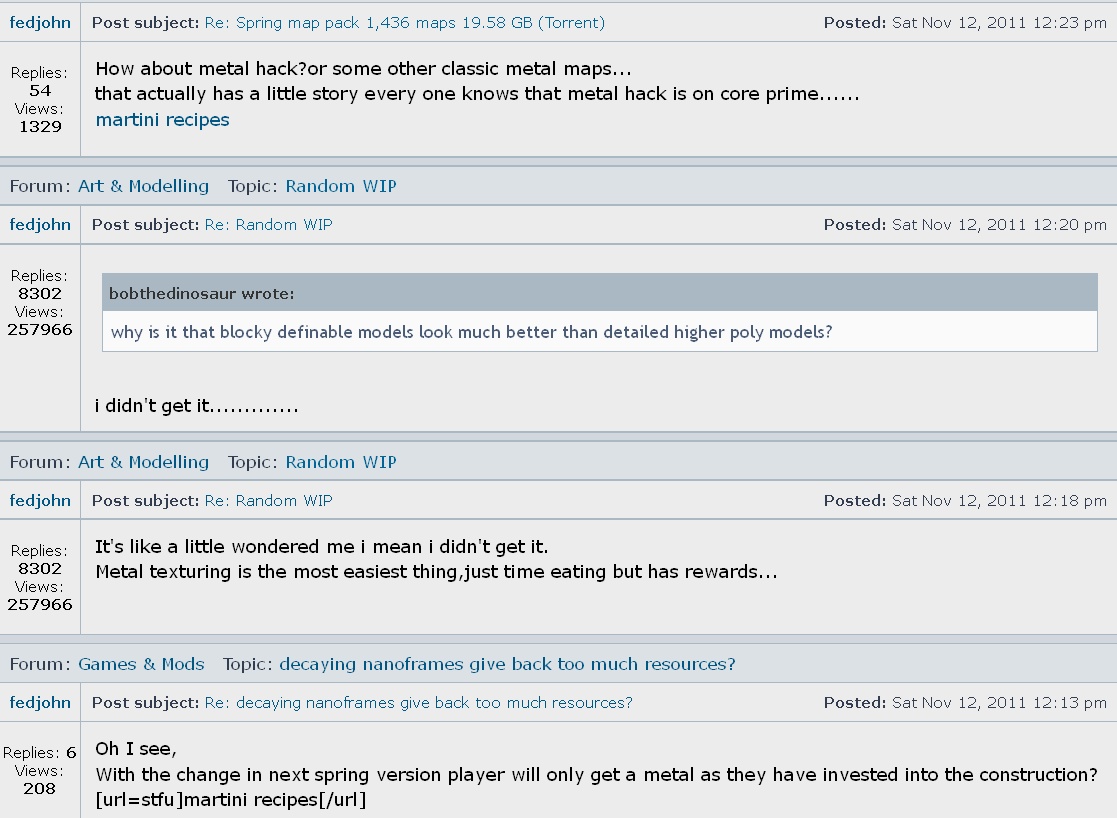 The posts are "clever" enough to be mistaken for an average springforum user posting stupid things from his iphone.
And no, "but only humans can know that metal heck is on core prime! He is an intelligent being!" is wrong.
They just mimic other posters, example:

original post by Jools wrote:How about metal heck? Or some other classic metal map, that actually has a story (metal heck is on core prime).

spammer wrote:It's like a little wondered me i mean i didn't get it.
Metal texturing is the most easiest thing,just time eating but has rewards...

original post by PicassoCT wrote:I never get it, texturing is one of the easiest thing, just timeeating, but hey the rewards..

Atm moderators can neither delete accounts or delete all posts by a user at once, which is annoying.
Problem is, since the posts at first do not appear like spam, users do no report them. And when the cover is blown, the spammer has already made multiple posts across the forum.
Top

Ironically Slashdot ran a piece on the Internet Water Army today. It links to a scientific report on the operation and detection of these groups. Despite being a research paper it is actually a fascinating read and even includes inside accounts from a researcher who joined a spam company to find out their methods. It also covers techniques for automatically identifying user accounts and posts used by their operations.
Top

What are you talking about, forum spam isn't gucci handbags a problem in this forum. We're clean as can be!
Top

On a more serious note, I actually once PM'd one of these spammer folk. Here's the conversation we had, in its entirety:

MidKnight wrote:It's not nice, you will be banned for doing it, and nobody clicks on the links.

If you're a person and not a robot, I'd like to ask why you do this. Are you paid for it?

the only time i found one of these guys (maybe i check the forums at the wrong time) i baleeted all of his posts, went to the website he linked to, spammed it with "stop posting links to this garbage on my hobby website" and then sent an insulting email, g-checking him on counts of having a shitty website, a shitty youtube channel and being a dick and spamming us with it.

he never came back, or deleted my comments
Top

when I see a spammer, I:

1. open his profile, view all posts
2. open each post in a tab
3. open the post info on one of them (for the ban interface)
4. ban him
5. click the delete button on each post, ctrl+tab, repeat

Admin panel
manage users
look up their name
At the bottom of their profile page are some quick link options, one of which is to delete all their posts.

does that work here too? (i guess you've be admin on the board to to so...)

to disallow editing posts is maybe no option as its used very often here...
Top

Is it an idea to block URLs in first five posts or so?

It might help but it doesn't work very well either. Generally these guys will post psuedo-random shit with no links for a while then suddenly come back and edit all their posts. More effective approaches would be:

* Detect mass edits, especially where links are added or changed.
* Detect instances where same/similar link is posted multiple times.
* Prevent an edit after 5 hours since post. This is enough time to revise posts but not enough time to come back and mass edit.
* Combine the above with a limit of 3 threads per day for new users. They can reply an unlimited number of times within the same 3 threads (required for support request threads) but not post all over forum in multiple threads.
* Automatically hide all posts from a user who receives more than 5 spam flags within a 24 hour period. A moderator can reactivate user on review. This allows community to moderate when moderators are busy or offline.

None of this stuff stops spam but it does raise the difficulty and therefore cost of spamming here. Often that's enough as there are easier targets out there.
Top

Obviously its quite desirable to spam here then if they're sending actual humans.

Since these people are doing it for the money, and since their threshold is probably anything above zero, we can only assume one of our forum members was stupid enough to take the bait and purchase something from a spam link, thus ensuring the return of spammers for the next few years
Top

Something similar happened on another forum i read, salsaforums.com.

I'm not a moderator there, so I don't have much insight, but after it they introduced rules to not allow any live links (for example we must write youtube.com/watch?v=764UrvhWNL4 instead of the full link).

They also automatically change the word "meta" to ****, apparently this can be a keyword that spammers need or something...
Top

hm, I hoped there would be something that does not decrease useability.
Disabling links, making them not-clickable etc is bad because that is more annoying than deleting a bit of spam.
Maybe make the forum not searchable by search engines?
Or something to confuse bots like this?

(and many more pages)

looks like all users with a homepage url that contains "vitamin" or "college" should be deleted...

i hopefully correctly ip-blocked the most annoying spambot.... (with iptables)

ffs that was 65 posts in an hour
Top

time to install one of these?

obiviously they dont post much, and they copy paste half of there posts, and later edit in over 9 links.

Detectable pattern, i see you?

Just need to watch out for people in there first twenty posts, editing in links. This can be done.
Top

You could..
*Add question to registration page e.g. "What company made TA?".
*Disallow posts until 24h after registration.
Top

One shift registers, one spams..
Top

My solution seems to have worked: http://springrts.com/springnetwork/forums/

I just made the captcha image the background of a div instead of the source of an img and it seems to have blocked out 100% of the spammers so far. Before that board was pretty much made out of spam.

Most spambots pull captcha images from inside img tags and just ignore everything in divs.
Top
Post Reply
37 posts