bobthedinosaur wrote:make one with a set of ww1 style trenches and some walkable fortress walls.

also. is it possible to make a tide like effect, where the water raises or drops in game? if so make a map that has a huge tidal flat that opens and closes with tidal cycles.

I asked about that once while back ago (the tide thing) It's doable i guess but cpu intensive to the point of not worth it, Z would know for sure.
Top

what about destroyable bridges? Z made a transport that acts as a bridge. it was a unit that can load units that come up to one end and push them over to the other side. play with that but with map gaia units for the bridges.

edit: I just thought of another one. quicksand!
Top its a cool idea, but GL getting any long journeys to work with current pathing
Top

KaiserJ wrote:its a cool idea, but GL getting any long journeys to work with current pathing

probably completely unrelated to this topic but first off... how big would the corridors need to be to ensure pathing works... and also, is there a way for the map to give "pathing hints"... namely I was thinking of putting targets in the centre of each "corner" and "door"
Top

@bobthedinosaur
Yes i was talking about tides. There's a thread about it in the mapping subforum somewhere.

Quick Sand would be kind of easy, just something in the type map to slooow the unit down. At least I think it would be anyway. Never used them.

Real bridges would be super cool.

@SinbadEV
Maybe about this wide?
http://www.megaupload.com/?d=TIKZLZ2J
It's the city map from the screenshot.
Top

roads would have to be pretty thick. i would say, for this map to work in CT, they would need to be at least 4 mechs wide

if i were to try and make this into a map, i would try and erase sections of wall so that there were more paths... for instance if you were in the lower left hand rectangle, and wanted to travel to the next rectangle to the right, you have to travel first in the opposite direction a considerable distance.

so yeah, i would try and make it so that no enclosed "road" contained a turn of more than 90 degrees of travel (which, in turn, sort of breaks the whole idea of using a maze, but there we are)

the biggest issue, since im guessing you haven't played CT, is that the carriers can fly, and the units cannot... so my guess is that you'd end up with a big carrier war in the middle with a ton of units lost and stuck forever in the outlying maze
Top

Have you thought about a map that forces you to fight in canyons like the indianajones one? Also if you have problems with ramps in a heightmap, send that over to me, i think i know now were the problem was with that heightmap.

giving units "hints" where to move via typemap sounds a bit stupid, (hopefully) the pathfinder will eventually be fixed and that is (hopefully) not needed anymore.

That maze is too complex for an RTS map, must be much simpler. A problem with thin walls is that CT cruisers flatten them when they land on them.

quicksand:
i think it would not be impossible to make terrain on which units sink in when they move too slow.

Or does anybody remember that Starcraft map where all units on low terrain were killed by fire/lava in intervalls? That would be possible too.
Teleports (which could be used as tunnels) are easy to do too, see the Pacman map: http://springrts.com/phpbb/viewtopic.php?f=43&t=24611
Top

New Map in the works thanks to this thread.
Top

Agreed that is coming out awesome!
Top 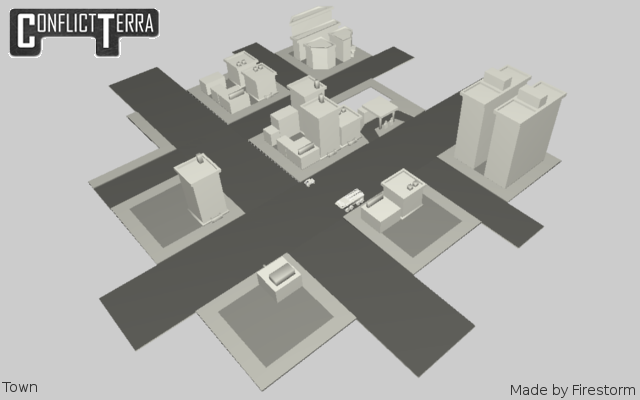 What, the town is growing? Don't people know this area is the regular impact site of space rocks? It could be dangerous if one of them hit that gas station.

Thinking about converting it in a handy, and not to repetitive tile- and featuremodel-set.

Also thinking about different phases of damage (you know, a few models per feature unit) but in any case that's for later.
Top

Put a big shield over the town to protect it from spacerocks.
Top 
So we put up a shield, and the rocks wont take notice.This is not supposed to happen. Oh man, I love that safety image. I have not seen that one. Might have to recruit that for some CT work

Town is looking super awesome Firestorm. I'm just wondering about how to implement it well onto the map. Not my thing, this map making and whatnot. Keep it up though, we'll find a way.
Top This one is rural, the rest will be city.
(I'm going slow...but steady, and faster with every repetition.)

Ooo, ooo! I dig that. Looking good. Has our "style" and everything.
Top

Guess artistic pride keeps me from that, i mean it's fun/rewarding to make stuff. Besides I don't know how Kaiser would feel about that.

I believe there is probably more than one solution to the hidden unit problem. Perhaps something like a widget allowing a player to toggle transparency of feature models with a hotkey.
Top
Post Reply
68 posts