I can make maps but i'm out of ideas. If anyone has any ideas they want to pitch let'er'rip. Even better but less likely make it yourself.
Top

Can you do realistic textures and SSMF? If so, do I have an offer for you!

How bout a map with a hill at the center of a small lake?
Top 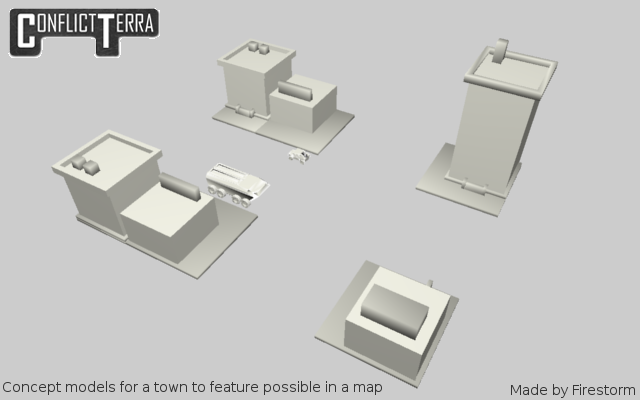 I propose a city map, but the city has been struck by a huge space rock or nuke, and a big central crater make up about 50% of the map and functions as the main battlefield.

I'm willing to make a few features If desired, since the picture above took me only 15min.
Top

I am working (or rather not, atm) on 2 maps.
One made by picasso:

and an own design: 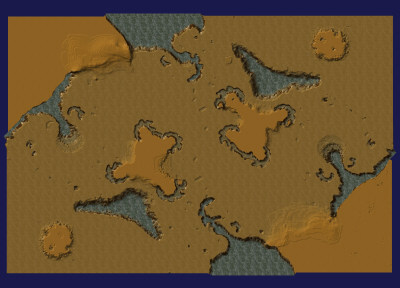 firestorm, I really love your work! Thanks for helping the CT team out!
Top

Well to be honest, the ct-stuff's more some sort of freelance-style open solicitations. Haven't had a ct-dev response for this one yet.
Top

Starcraft-space-platform style map except that the in between spaces are water instead of space and then you only put your resource rocks in the water...

also, you can use this to make the basic of the height map:

play around with the settings till you find one that's good, but I'd recommend, labyrinthine corridors, don't remove dead-ends and symmetric room placement... also use a "small" or "medium" map and scale it up so that a reasonable number of units can pass through the "corridors" without breaking the pathing... I'd do it myself but I'm technically at work right now.
Top

Those buildings look great. Snoop had been working on a city map. Not sure why he said he was out of ideas.

I'd be interested in texturing those buildings, see how they turn out in our "style." I'm sure Snoop would be too.

An idea for a map I had a long time ago but never realized due to things always coming up was a map which centered around a large space station (think Star Wars Droid Federation Ship more than International Space Station, haha) that has fallen and crashed into the earth. It would obviously be large crater, but with a cut through one of the corners showing where the station had sort of "slid" into the center of the map.

The original idea was to cut up the station into different features and have them set up so that players could (and would want to) go into the middle to extract resources from it, but so that it wouldn't be like one little engineer eating up the whole ship and then poof it's gone. Like maybe have 3 or 4 specific pieces make up a module of the station or something.

Not entirely sure how well this idea would work out in practice, it's mostly theory. Also modeling a large space station and then cutting it up in a manner to make it look both crashed and easy to extract was a little hard, and moreso, required some planning I wasn't willing to do at the moment.

This idea also came before CT's massive shift in resource acquisition. So not so sure how it would jive with meteors falling and miners and all that. (Not sure because I haven't thought much about it, haha)

If anyone wanted to work with this idea, I'd be happy to talk with you.
Top

Well, do you have the usual assembly of FFA maps? They're an obvious mapping direction that you may still need.
Top

I'm hoping you guys can do more statements on the CT-style.

For instance: Can you imagine garbage bins on the street? I ask in regard to scale. I sometimes get kinda lost in details, and that could cause ugly inconsistency in models. How big should the smallest object still visible ingame be?

Another thing; A lot of rts-games have models with different scales relative to each other (especially with naval stuff). That does not have my personal preference. Are/could there be some guidelines regarding this for ct?

On resources from a space station:
Last week I was trying to incorporate the turret launcher from Fibre into my own mod. (failed until now btw

) but i was going to use its basic principle for my resource system.

If i understand correctly, it spawns a unit on the location its projectiles hit the ground. I was thinking about using this let fruits fall far from its source-tree, or have rocks spewed around by an active volcano.

I'm sure there is a neeto way to let a crashed space station provide resources in a certain way.

I'll give it some more thought soon, and get back on it.
Top

CT doesn't strive to be perfectly to scale. Certain units are in scale to one another, for example the Light Tank, Hojo, and the pine tree feature we use in our maps, are all generally in scale to eachother. But according to that scale, the Flagship is about the size of a personal sailboat. Really, the Flagship is supposed to be about your typical spaceship size, like somewhere between a Star Destroyer and the Corvette ship from the beginning of Episode 4 (Sorry for the Star Wars references, but I feel it's something more people would be familiar with

I probably wouldn't include trashcans, although if you did they'd be pretty small.

I made this image a while back. Like I said before, we don't strive for perfect scale, but this is sort of the scale I have in the back of my mind when making things.

Resource containers falling instead of meteorites would be interesting, but would no doubt require some work from Knorke, who probably isn't looking forward to that. My largest concern would be to simply get the crashed station ready and on the map.

Edit: looking at your town mock up now, I notice you seemed to use the vehicles for scale. Some vehicles are themselves probably a little larger than they "should" be, but I was going for easy playability. The Jeep is pretty small, while the old metal truck model has been shrunk considerably now that it's the resurrection truck. I would use mechs as a scale, I care more about them

If you want to add custom space rocks units to your map, i think you could just add the containers as new units to your map and then add some custom tags to them so that the space rocks Lua & mining Lua recognizes them as mineable.
Mineable units must have:
is_mineable=1
Their health is also how much metal you can mine from them: 500 HP = 500 metal can be mined from this.
Oh, and they must be
category = [[MINERALS]],
You could also have moving mineable units btw.

If a unit as
impactunitname=bla
in its unitdef, it will drop as a meteor.
ie you could have
impactunitname="landedcontainer"
Then your container would drop together with the usual space rocks. There are 2 meteors (large+small one) so 1/3 of the meteors would be containers.
Currently there is no way for maps to remove the normal space rocks from meteor storms.
Basically look at the custom tags of http://code.google.com/p/conflictterra/ ... meteor.lua & http://code.google.com/p/conflictterra/ ... impact.lua

The volcano idea sounds cool, in facht I wanted to do this in a very similiar way but then noticed there was no CreateProjectile() function

For the buildings:
I like them too but spring's urban maps have always been a bit fail imo. I think best would be some small buildings. ie a gas station or farmhouse on a road with no near buildings would still look ok while a lone sky scraper in the desert looks strange. I think buildings on the sides of cliffs might be worth a try too. Something like in Fallout or Starcraft 1:[img]
http://planetmedia.gamespy.com/images/0 ... normal.jpg[/img]
Top

I started making a few skyscrapers for an urban map. They can be found there. I like the idea of torn up city with a crashed meteor in the middle. Could be a very large mine-able meteor worth a lot of metal. I'll share more of what i have once I get home.
Top

Good to know guys. I can get busy

if you have any questions firestorm you can reach us in real time in #ct.
Top

Cool. I'm almost getting ready for bedtime, but i'll surely drop by in the (near) future.
Top

@MidKnight
No, sorry nice texturing is beyond me and I don't see a ton of use for ssmf with-in conflcit terra. Though if you still want to share your plan/idea i would be happy to listen.

Just felt like digging through imageshack to highlight a few ideas and pitfalls that a would be ct_mapper would come across.

@Kenku and Pxtl
I drew inspiration from you two to come up with this. I'm excited about it. thanks for the input.

@FireStorm_
This is the rough scale i was going for with road width and stuff. I can share whatever I have later.

PITFALL
Ramps are hard to make. This map was ruined by a ramp that looked more like a waterslide when in 3d. Also rolling hills are bad for ct.

PITFALL
With currenting texturing methods GIMP will sometimes ruin your texture near the last step if the map is very large. (Going to 64bit Gimp has seemed to alleviated this)

Sorry for the rambling almost pointless post, but it did manage to eat up enough time that now i can leave work so yay!

I'd still like to see Peet Marsh get at least one test game.
Top

make one with a set of ww1 style trenches and some walkable fortress walls.

also. is it possible to make a tide like effect, where the water raises or drops in game? if so make a map that has a huge tidal flat that opens and closes with tidal cycles.

maybe a volcano with great resources by the base, but random eruptions spawning lava weapons to damage near by units.
Top
Post Reply
68 posts