SpikedHelmet wrote:Not necessarily. If you're looking for a design which couples functionality with extreme simplicity then the helicopter is the way to go. Afterall, 100 years after the invention of the aeroplane, despite the fact that the technology has increased exponentially beyond what anybody could even begin to fathom back then, airplanes still follow the exact same basic principle; airfoil wings for lift, a powerplant which provides propulsion via thrust, horizontal and verticle stabilizers, a cockpit, etc.

We have lifting-body designs which have no wings, we have advanced tail-less fly-by-wire systems, we have drone aircraft with no cockpits, we have thrustless gliders...not the best argument.


Afterall, the United States Air Force still uses turboprop aircraft 70 years after the invention of the jet engine despite the obvious and overwhelming advantages jet technology has over a spinning propeller.

A turboprop is basically a turbofan with a propeller on the front, not to be confused with older rotary designs. The advantage of a turboprop is a superior thrust-to-weight ratio, despite a limited top speed. They're not underwhelming, they just a specific performance niche.

More importantly and on topic, ducted fans look just as awesome and more futuristic, so I'd say there's plenty of room for looking cool without something being a straight-up helicopter.
0 x
Top

C&C's orca origionally used 2 propfans mounted on the sides to allow it to fly without requireing a top rotor. Since these were armoured and made of titanium, it was harder to cripple the helo via an impact, and they were also adjustable so the craft could be manouvered like a jet.
0 x
Top

I spent a long, long time this evening, in very, very strange places, while researching some stuff. Fun stuff was seen, including this gem: 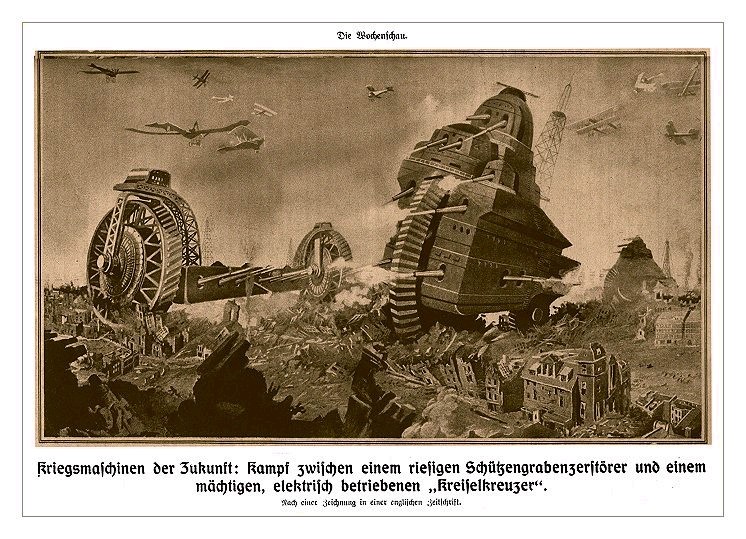 At any rate, I'm hoping to have something done with GMN's heli fairly quickly, but IRL considerations make that unlikely today. Expect some edits, but if you're hoping for ducted fans... expect disappointment. I wrote a cool way of doing animated heli blades, GMN made a really nice, visually interesting, semi-conventional heli model, and by gum, I'm a-gonna use it

this is my dream mod
0 x
Top

I got bored. Here's a random storage model

EDIT: And another model.
Those things are solar panels by the way. I've no idea if Argh plans for the Human Resistance to use solar - if not, it'd make a good map feature

Argh wrote: I wrote a cool way of doing animated heli blades, GMN made a really nice, visually interesting, semi-conventional heli model, and by gum, I'm a-gonna use it

Erm, this could be a bomber or a fighter, or whatever, really...
0 x
Top

it looks like it would make a good, stealthy strike-fighter, akin to the F-117 -- it looks too large to be dogfighter, but not bulky enough to be a large bomber.

Also, as for the solar panel thing: most solar panels today (and I assume in the future) have rotating panels that can face the direction of the sun wherever it may be in the sky in order to maximize the amount of energy absorbed (as a sidenote, scripting such a solar panel would be wtfawesome), otherwise it becomes extremely inefficient (I imagine TA's solars are also quite inefficient as you're not likely to get more than one direction absorbing the full amount of available sunlight at a time). While the panels on your structure seem to be able to rotate along one axis, maybe you could consider redesigning it slightly so that it can rotate to be able to face the sun in any direction...

Just a small critique and probably doesn't matter. I wouldn't even bother mentioning that if it were any other mod, but this mod seems good enough that little nitpicking is worthwhile. :)
0 x
Top

Solars only need major tilt in one axis (east to west), then minor tilt to deal with seasonal changes in the sun's position (further north or south in the sky).
0 x
Top

smokingwreckage wrote:Solars only need major tilt in one axis (east to west), then minor tilt to deal with seasonal changes in the sun's position (further north or south in the sky).

Depends on the planet you're on.
0 x
Top

Um, I need to look up how to get the sun's position using LUA, again... I could just have LuaCOB get the vector and voila... solar panels that actually point at, y'know... the sun. Then, if I can figure out how to manipulate the sun and some other values, I could have day / night cycles, and heh, even turn off power at night

Seriously, though, that building might just be a good one for the level one Resistance "delivery point", which I'm still working on the mechanics of. It looks vaguely like an aircraft control tower, I think it might be a winner.

I don't want to get into gameplay of the Resistance too much yet, but I am now about 99% certain that I'm going to get the main thing done. Not discussing what the "main thing" is, because it's, um, top-secret gameplay mechanics- in fact, it's the biggest secret of them all. Once I get it working, it's (thankfully!) all downhill from here.

I'm just going to say that it makes buildings dropping from the sky look really weak, and is going to be a showcase of how LUA can work in Spring, and do some really radical gameplay stuff... without breaking AI support

fix your modlink Argh. 3 jillion lines of gibberish are fun, but not as fun as a Spring mod

Been wondering something - What is the intended role of the artillery bot? I've been using the big "seige tank" doodads for "real" artillery, and the rocket tanks for "over the rubble" short range arty, but I've been having a tough time finding a niche for the arty bot. It seems to fire with too low a trajectory to hit a lot of the time, and when it finally nails something, the damage is... underwhelming. What am I missing?
0 x
Top

@Pressureline: right-click to save, it's a direct link to a file.

@Erom: Well, actually, now that I know what's wrong with EdgeEffectiveness, I intend to change them before the next release, to rebal. Right now, they're really good for getting rid of rubble, and grouped together, they cause lots of weird collateral damage, due to groundbouncing projectiles which often go well beyond their theoretical max range. But I'd have to argue that they're a little weak at the moment- they suffered more than most from the introduction of fixed-facing unit FlankingBonus...
0 x
Top

Looks like Firefox likes to open sdz's in window if you click on them.
Had this issue for ages with direct sdz links.
0 x
Top