Next BA is still going to be more similar to BA 9.46 as well anyway. Remember that last releases were just test versions.
Top

If you are un-resigning yourself after viewtopic.php?f=44&t=35840 and now planning future releases instead, I'm sorry to have relied on apparently outdated info, I can't know before being told.

(Many - currently including myself - don't follow repos much, or try to guess (un-)resignations based on them if we do.)

In this case, it would be polite of you to respond to the request in viewtopic.php?f=44&t=35809.
Top

Hi Floris since you are unresigning yourself and releasing a new version please confirm if you have reverted the issues highlighted in red below and unwanted post 9.46 gameplay, aesthetic or balance changes. 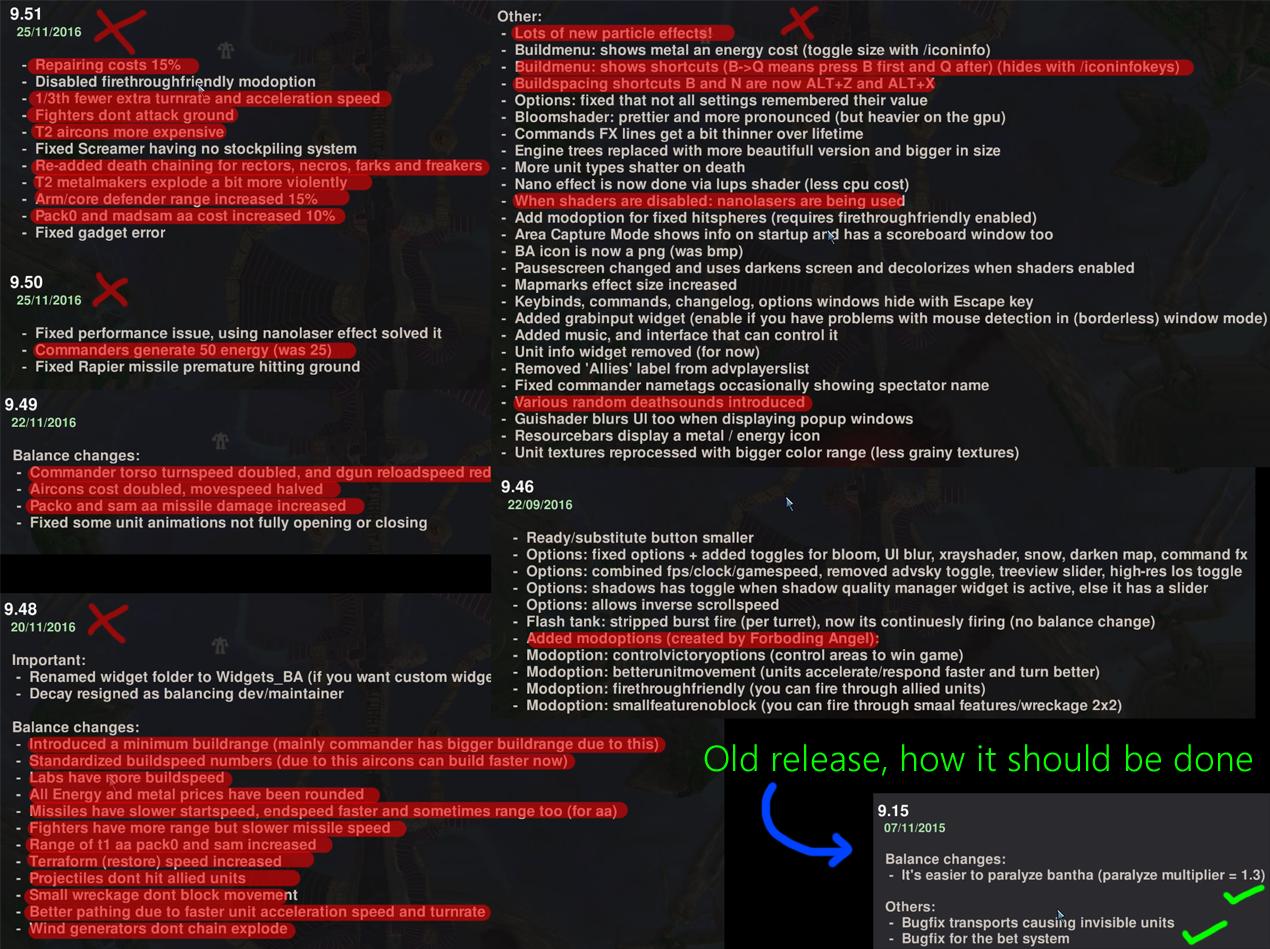 He said "similar", not "exactly". Create your own fork(Which I am assuming that you already doing at this point) if you take issue with his decision.
Top

why should mod OPTIONS be removed?
Top

Thanks Jonny et al but I want to hear from Flow rather than trawling through commit messages. Ultimately he is the unresigned maintainer so we deserve to hear from him.

I clicked on one commit and already saw an undocumented change. If only that level of consistency was applied to post 9.46 balance.
Top

Checking for incomplete/inaccurate commit msgs takes rather longer than 10-15 minutes in this case.
Top

Smoth, I agree with you that is is essential to question "why?" before changes are made. You should also direct your attention to the other more significant changes on the long list, that came since 9.46.

Modoptions could obviously be left in as long as they are disabled by default. Of all of the items highlighted this was the least concern - 9.46 is widely accepted by the playerbase already. However, I agree that is is essential to question "why?" when changes have been made without explaination. We share the same reason for posting in the first place.

If the community raise valid points or objections, as you have done, or for example by only playing on 9.46 servers, it is always polite to respond to them rather than remain silent. A maintainer shouldn't keep making changes without explaining "why?," especially after valid objections are raised by the players.

@ FLoris: I am really glad you actually do somethings to try to fix some of the long term issues lot of players already complained about:

Floris wrote: - Unit acceleration and turnrate buff is needed for better pathing, but also makes vehicles a bit too powerfull atm (9.52 has nerfed vehiclespeed a bit)

Maybe Ares and the "balance commitee" can comment on that since they are probably the best to evaluate the impact...
(and btw veh are meant to be much more powerfull on flat area, otherwise you never build them (a small difference is not enough to balance kbot versatility)

Ares wrote:If the community raise valid points or objections, as you have done, or for example by only playing on 9.46 servers, it is always polite to respond to them rather than remain silent. A maintainer shouldn't keep making changes without explaining "why?," especially after valid objections are raised by the players.

Floris did not do less explanation than the previous maintainer did regarding balance. Actually, if you have a look at the old BA realease threads, there were no explanation of what kind of "balance" they were willing to do...almost no maintainer ever explained that (please add links if you find some, i would like to be wrong). But anyway, that does not matter so much since explain the balance interaction with the spring engine is probably very much time consuming and would only benefit to those who knows a bit about the engine

Actually you have not even yourself do anything on explaining what you think is making current BA great in yours eyes. Why don't you start with that ? I am sure that then people can come up together on what should be done in a much more effective way.


Actually, the game "your love" was not loved anymore by some player (that include me, that is not a secret) who like the older version and there are extended explanation in this thread for example:

viewtopic.php?f=44&t=28484 and all other thead in 2010/2011.
At lot of the unit OP-ness have been nerfed at that time and it continus a bit furher after that: most units being averaged towards a central point which results in a boring balanced.
A consequence of that is big eco games to make use of later Tech unit which imo was the aim of the BA dev of that time even they never say it but that is another story since forcing people to go through the tech tree is not necessarily the way to have fun (see the big 1v1 community mostly playing in T1 that was happening before all those changes came in : OK that is also due to engine (veh turn radius, acc, pathing cluming etc).


(some player also claimed they stop playing cause of changes die to BA balance / engine change but that is another story.)


Bottom line is that idea of good balance differs very much between poeple (e.g. forb mention something else (I also disagree with it btw)) and I want to point out no parties here gave his vision of balance yet in none of the thread I read...
So if you want to start by explaining that, it should not hurt. A word to the wise.
Top

Absolutely nothing will change :DDD