You know, given how many people are telling you to 'Ask Sak', you might try asking Sak. :)

The Packo is a GPL model I found and mashed up. Not Crems.

The AA ship is ENTIRELY Cremuss's. He left the texture 'uncompleted' though, which is why it doesn't look as good. I polished it up a little for ZK, and made a series of units using his models:

(There are more currently in Zero-K and they now each use a different base colour, which is really bad for visual coherency but much better for differentiation).

The .xcf (gimp) file is in Crems file repo, which can be found here:
http://cremuss.free.fr/files/

It includes a LOT of untextured stuff, the remakes are in 'TA', while in 'Science Fiction' you get units like this: 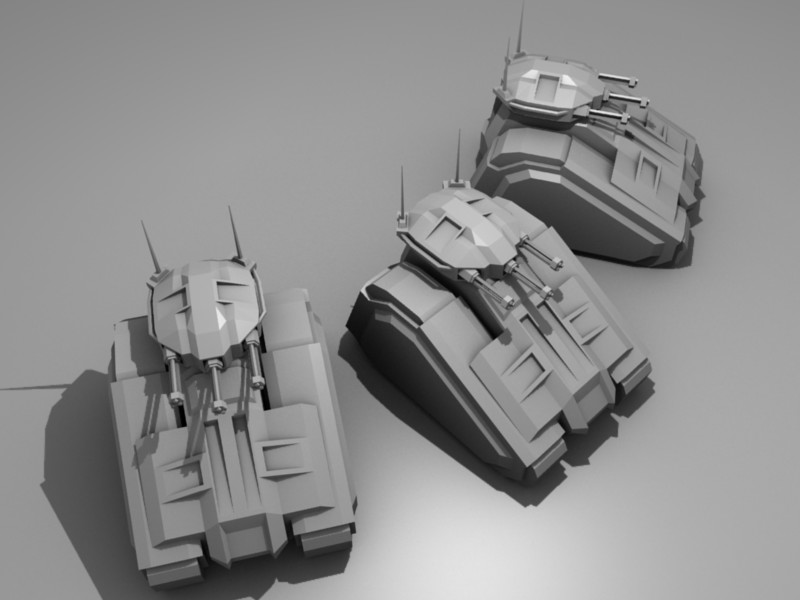 Which looks basically like a penetrator with 3 EMG's and doesn't exactly match any one BA unit.

If texturing is the easy bit using atlas textures etc, then you might consider using some of these.


On what Bob said about taking BA:R models, would it help if we edited the texture atlas somewhat? Obviously we only need to do that once and it would work on all models. They use a lot more team colour than is strictly necessary so we could probably put some other colour in some of those areas.

I also find the Cremuss models a bit 'flat'. They're gorgeous as hell etc, but the large uniformly coloured black and yellow panels kind of stand out. We could dirty these up a bit and change some of the palette if that would help you keep a more unique visual coherency for the BA:R units.

Also, this guy is clearly Logos, not Core. :D

That's one of my brothers concepts for CA, so if you actually do want to make it please do, it isn't in anyones pipeline right now and I always thought it was a very cool concept (Though obviously, we WILL steal it).
0 x
Top

Thanks for the info Sak, but I was aware of most of it already. (except the scifi hovers and tanks)


On what Bob said about taking BA:R models, would it help if we edited the texture atlas somewhat? Obviously we only need to do that once and it would work on all models. They use a lot more team colour than is strictly necessary so we could probably put some other colour in some of those areas.

What exactly do you mean?
0 x
Top

I can model if someone is willing to create concept art.
0 x
Top

Beherith wrote:This is not for people with old computers.
If you have a very old cpu (more than 6 years old, eg. pre core 2 duo era) then it will not work, just as BA is unenjoyable in its most common form.

New cegs? Well, BA remake has what you put in it. Checkout the svn, see how cegs work and fix them up!

Will you have a lowhardware version, that is compatible with updated BAR? It cant be this hard, to keep old BA in sync with BAR
0 x
Top

Lets keep in mind that the concept art Arne posted up recently is not the only art he's produced. In the past he's done top down shots of every arm and core unit and then some, complete with what the weapons should look like and scaling
0 x
Top

Saktoth wrote:On what Bob said about taking BA:R models, would it help if we edited the texture atlas somewhat? Obviously we only need to do that once and it would work on all models. They use a lot more team colour than is strictly necessary so we could probably put some other colour in some of those areas.

I'm not sure what you're referring too, but I assume the dilemma is related to how much team color is used on the models.

As I've talked about before, large scale rts games with hundreds of units performing different functions on screen at once rely on contrast more than functional design.

In other words, from a bird's eye view, you recognize different units based on the contrast between (ideally) 2 contrasting colors/saturations. In this case it's team color and very dark gray. For the best recognition, the team color should be fairly present over the whole of each model (somewhere around 40-60%) in order to create abstract shapes which your mind instantly associates with that unit. It is basically essentially in making sure the battlefield doesn't turn into a big gray mess. The other element here that helps is ofc the glowy bits, but that's sort of acting as a third party element here. (As it's illuminated.)

So, no, I really don't think that they use a lot more team color than is strictly necessary at all. If this were a smaller scale game then yes, it would work a lot better. But it's not.

Plus, even if you were to edit the texture to try and solve that, you'd end up basically fucking up every unit. The parts of the texture are used so differently for each unit that the abstract shapes would be...well...very abstract. You'd have some units with no team color just by switching one panel, because some units only use that panel in multiple areas.

I mean, if you want to try it, go for it. But, I can tell you, based on how we use atlases, that it won't work. You're going to have a huge mess.

The only way to lower the amount of TC on each unit is to rewrap everything. But, again, I really really don't think that is a good idea. There are reasons beyond that of the purely artistic for why abstract shapes need to be created using contrast.

Beherith wrote:What exactly do you mean?

Sorry, to be clear, I'm responding to this:

Mr. Bob wrote:While you legally have every right to do with them what you will, I'd rather they be used for a single project. Reason being; when people see the game for the first time, I'd rather not they see multiple versions of what looks (artwise) to be the exact same thing. It gets confusing and it looks wildly unprofessional.

We obviously already use a decent amount of Cremuss's work, and have poached a few of your models as you no doubt know. This is going to compromise the appearance when people go 'Isn't that from Zero-K?'. If we edit them, we won't be cramping your aesthetic. I'm just asking whether that would be worthwhile or help you out on that front.


Mr. Bob wrote:I'm not sure what you're referring too, but I assume the dilemma is related to how much team color is used on the models.

It's certainly true that you need a contrast between distinct areas of colour to get a definite idea of the unit at a distance, but those colour's do not need to be teamcolour and grey. You only need enough teamcolour to be able to identify the unit's team, so you could use, say, black, grey, silver or camo as your palette colours, and have 'racing stripes' or logos large enough to identify the team- or do like s44, and have no teamcolour on units, just using teamplatters. This is what I mean by 'More than strictly necessary'.

Either way, we would not be required to worry about changing every single model, Zero-K only uses 3(?) BA:R models right now, so it would be pretty easy for us to change these in order to not rip off your aesthetic. I'm not talking about editing the whole unit set or remapping every model.
0 x
Top

I am pretty sure bob asked for you NOT to do that.
0 x
Top

Oh, you were responding to that. I was under the impression that you were wanting to change the BAR models for BAR.

Legally, you can do whatever you want with them. Personally, I'd rather you not use them all in any other game for spring. I'd rather they be somewhat exclusive to BAR to maintain a distinct look. But, I'm fine with you using a few and messing with the texture and wraps or even meshes of them a bit.
0 x
Top

What if a lua coder made a cool feature for a game in a gadet, let's say ZK. Then he posted on the forum that he prefers that other modders don't use his code because he wants his feature to stay unique to ZK. I just wonder sometimes.

Technically the gadget must be gpl so he has no choice. But you can license your art differently. Or is it that you can't because it's similar to TA.
0 x
Top

no, this is incorrect.
0 x
Top

If you have issues with the decision, please PM me personally and don't flood this thread or bother Beherith/BAR-people with subject. Thankies.
0 x
Top

I was merely pointing out that Arne's recent artwork isn't the only artwork he's done, nothing more. I'm quite aware that non-Arne artwork and ideas are at work here too
0 x
Top

What about static units like nano, anti-nuke etc? I haven't really kept up to date with what models have been done but if T2 bots are really the only thing left that need to be modelled then I'm stunned.