knorke wrote:Karl:
nice you are still working on KKND.
i think the reason why your machine shop model looks a bit bland compared to the original is because the old game used high poly models then rendered as sprites and maybe more details added by pixel artists.
Now your 3D model has many plane surfaces and so with close zoom the feel is very different. The original also all these metalic pipe things going over the building what your model does not have.
I think with a good texture and the screenshot resized to 100x100 like the original sprites your model would look quite similiar.

It is just the 2D<->3D difference I think. When looking at the screenshots from the Generals mod, the game did not seem like KKND at all. Only when I saw some signature units (like the big tank thats also in the intro movie) i recognized it as kknd.

Maybe i will do that but but remeber that i am not that Great modeller and 2D Artist i am just doing that all with my Freetime
i will compensate the look with textures maybe a bit more detail.
But i will look further to make it looks more it is build off or reinforced (or whatever the hell the pipes where made) Pipes
it's a bit hard to remodell these because especially compared with Westwood nearly all units and Structure you can see in a video!
wich the case of KKnD isn't. And its a bit Hard to imagine that in 3D especially the inner room. and Remeber my Mod/Game (or how ever you will name it) is set in the time between KKnD 1 and KKnD Krossfire so this is why i am making them a bit different or making it "Better" in my opinions. 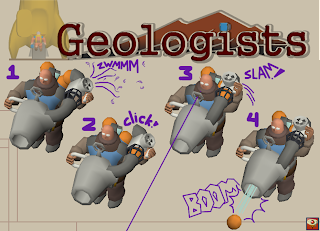 Looks really cool. Are you doing this with the conflict terra guys ore you are doing your own thing?
Top

FireStorm, those look totaly awesome! Are you keeping the toonshaded look in game or are they just pre finished texture? (It would look totaly great either way im sure...)

(EDIT:: Image removed as it seems to show up in the attachments box...)

I was worried my style would be to similar to ct. It is somewhat different in fact. I also think spring modders should be colleagues long before they ever might become competitors, since spring modding can be pretty hard. (Furthermore I've let Oksnoop know that if the ct-team provides a specific idea, that i'd like to try and help visualise and realise it. In the mean time i make stuff like this.)

As for texturing, i do it in a very lazy (or time efficient?) way. While UV-mapping I simply move al the surfaces witch are the same colour on the model to the same location. This location of course corresponds with a colour. my textures show mainly some coloured squares.
(what my models look like ingame)

the bear is coming along very nicely, btw.
Top

I am officially giving you mad props bro! That looks fantastic!

Most spring projects share code left and right man. Only a few people are problems. You can bug me or snoop regularly I am sure. Eventually you will get into the fold and be part of the spring modder conglomerate.
Top

Nice stuff indeed. You should idle in #moddev with the cool kids.

I usually do... (or rather did; havn't been playing much lately). But thanks for the invite and encouraging words.

Hmm i am not happy with this

How should i solve with the Mad amount of Edges/Vertices?
UV Mapping it would take ages

I need suggestion for it Badly.
I dont want such an high poly model

any suggestions or thoughts?
Top

Unwrapping UVs Properly always was a pain in the ass, and always will be. That modell looks relativly easy to me- and if its not, you still can use autounwrap-software and paint on it in 3d before.
Top

this is how i'd run it

That is stupid easy to uv map stop whining
Top

...Congratulations, smoth, you just won the 'most helpful advice ever' award. Will you be collecting it in person or would you prefer it sent delivery?

Karl, it might be a fairly complex object for you, but it's still largely made up of simple shapes (ie boxes and cylinders). Try looking up some simple UV Mapping techniques; they should help you.
Top

I'd dissemble it, make some sort of exploded view.
One can then reassemble after uv-mapping (or sometimes in UPspring).
Top

n1ce ^^ now i really would like to texture something but to bad i left spring modding :/
Top

Oh its Glad to see you back LordLemmi!

why did you quitted Spring (Modding)?
Top