looks like a map for world of padman
0 x
Top

The Trick is to take generic objects like books, candles, and stuff- and stretch & twist them, were it cant be seen on the texture. Book bigger in volume, no prob? Smaller, no prob again. Candles? Randomize the Size, some gameteams relying on dungeons, even wrote little "Tree"generating programs for candles.
Doors? Noway. Bones? Sure. Swoard? CopyPaste, Scale Down, stick it as dagger in a goldheap or treasurechest. Scale up, and pullt it with some titanic bones on the floor. The only limit is were the texture becomes pixelmosaic. Its ironic, but the better you become, the more your work goes to detail, so the more you have to copy and paste, to not let go you hours to waste, so you ve turn it into a battle against the pasta.

Me i will play on the players imagination, its far more effective, and done can overcome the biggest pixels (minecraft) E.G: Just make a dark rift into the wall, and add eyes that reflect light. Now if you get closer, the eyes start to vanish, not standing your light. Simple as fuck, but scary as shit. Creepy creatures in the wallz, following me, everywhere. No im not mad, they are in the wallz, believe me.
0 x
Top

Wombat > 100% handpainted from scratch yes, but with a wacom intuos a3. I'm pretty sure you can't do that with mouse or it'll just take ages.

You can do that with a mouse, but it is not good for your hand, and it takes ages. Especially scratches are hard to generate with a mouse, because you litterally have to try&error, till you get a non-shaky line. Cremus Tools make me have the drools.
0 x
Top

i like what you did with polies on the floor.
0 x
Top

yeah, the thread will be dead for another day, just because cremuss scared everyone away. Evil Posterboy is evil!

It would be awful without pressure support :D
Anyway tablets are really worth it for anyone who wants to learn CG drawings/painting. Wacom a5 are way enough to learn and are very very very durable. I've mine for ages and it's still working like a charm :)
I'm thinking of buying myself a cintiq 12wx though, (if I have enough money :p) but I'd like to try it first

Cremuss wrote:It would be awful without pressure support :D
Anyway tablets are really worth it for anyone who wants to learn CG drawings/painting. Wacom a5 are way enough to learn and are very very very durable. I've mine for ages and it's still working like a charm :)
I'm thinking of buying myself a cintiq 12wx though, (if I have enough money :p) but I'd like to try it first

It's a 4 year old tablet laptop with a wacom digitizer.
I got a version with a 2ghz Core 2 Duo for $250 from Ebay. It's a nice laptop, at least as precise as my old Bamboo tablet, and doesn't cost a fortune. Screen size may be a problem, though. You may want to consider it.

hehe yeah not bad but as far as I know it has 256 pressure levels only and keyboard isn't accessible anymore in "drawing" mode. (and someone told me it wasn't as responsive as wacom tablets)
I'd stick with my intuos a3 for the moment anyway, cintiq is just more like a dream right now hehe.
0 x
Top

Anyone ever used a pen mouse? (I mean without a tablet)
I'm thinking of glueing a pencil onto my mouse to see if it works for me

And a picture because i like this tread to have them: 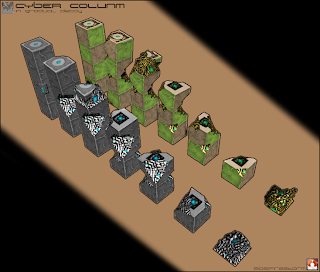 t would be awful without pressure support :D

you can simulate brush pressure in PS but it's not really comparable..
0 x
Top lol Accidentally posted this in the lego thread. Anyways:

A model me and another guy made just for the fun of it.

Texture made by Red Shift.

Way too CORE looking to replace the vanguard.

Might need some small reworking on the legs though, where each leg is (Hip area) would need to be able to rotate a few degrees forward and back so they can pivot to get a proper walking animation.

Ya know, so each leg isn't just moving up and down, but also pulling forward to grab ground and pull back ect..
0 x
Top

I was going to do that, but I decided not to because when I made the walk animation you couldn't really tell from a top down view. Where the ao baked shadows are, it just looks like it turns directly into a hole.

Not for Balanced Annihilation or spring in general btw.
0 x
Top

cute.. reminds me of a pretty old (and bad) model of mine as well as the MBT in the Nintendo Wars series
0 x
Top

Ive been returning to work on some stuff I've left half finished: