I guess I could have elaborated more

If I remember right, my last posts were wishy washy on the design. This is more or less just to show what I ended up with.

Not much has changed aesthetically. I mostly just moved things to where they are now, then left them. Any recent advances have been mostly features/bug fixes. Bluestone has been working on chilifying the remaining widgets as well (e.g. advanced playerlist), and I believe just about everything is chili now.

I also made a new skin (barely) that just puts robocracy on a black background (window). Originally the skin was an example for a tutorial I was working on, but I took a liking to it. Hopefully it appeases a few more people, if not the skin's changeable in the menu

@smoth: Quite alot has changed in the GUI, but its more a large number of gradual changes than any single big change. One thing you might be interested in is that the player list is reimplemented in nice looking Chili (and with clean code that was written from scratch too).

Almost All the features that were scattered across multiple semi-compatible widgets have been integrated into the same look and feel - the Initial Queue that allows a queue to be set before the game starts, the info panel for newbies, the list of currently active hosts, the factory bar to modify build queues without having to go back to your base, etc etc.

There have also been quite a few bugfixy/enhancement type things, like being able to handle large numbers of units in the build/order menu, fixes for the console to handle message spam, centralized option menu for widgets, sharper icons and suchlike.

Hope that paints a pretty picture for you :)
Top

yeah. It is always hard to tell when there are performance and back end fixes. Often those are some of the biggest fixes to make as well. 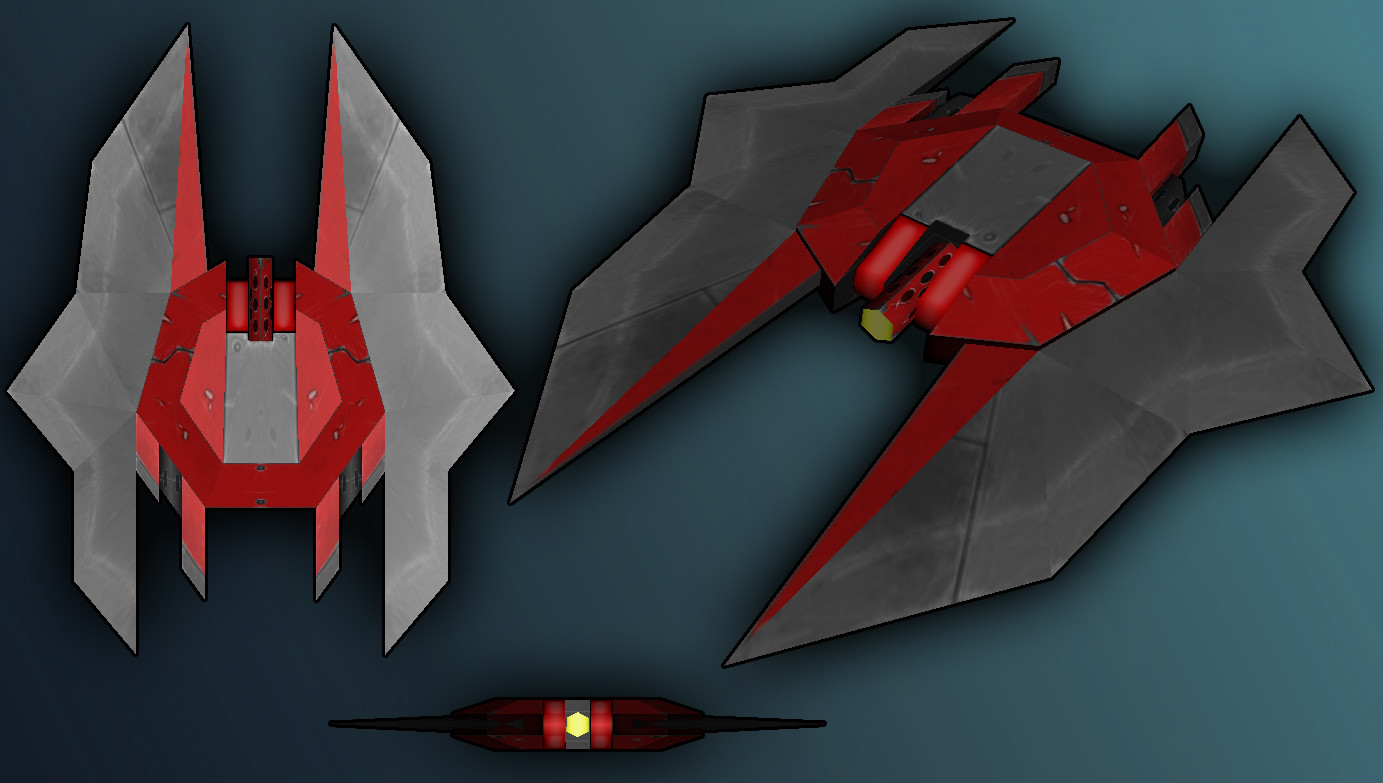 
PHP-Server wrote:
SQL-Server has encountered a causality Error and executed a full reverse Rollback on this post. Please contact a admin if the error persists

Interesting design, the only thing id say from this picture is the legs look a bit fragile.
They could be more bulky heavy looking especially the lower parts, however the joints are fine.

Another thing id say, is i see some excess in detail in the middle, but then again it could be the picture.

Not really interesting, just a lot of greebles in the form of squares. Needs more shapes to form larger parts.

Check this guy's art out, I suspect this is the sort of look you are going for?
Top

Like it.. it has a theme and it stiks to it. Rest of the faction does also stick to that theme?
Top

Yes the visual theme is a bit blocky (never stopped minecraft...)
Transport Ship ...not sure about the infantry helmets lol they are goofy for sure blocky and zombies are 2 of the majorly played out things in gaming these days. That and roguelike, mmos or HEY GUIZE I AM MAKE MOBA NOW! etc.
Top

I was trying to be nice smoth

Also you could take inspiration from this infantry style, blocky doesnt mean you need to limit the variety or reduce the detail of the models.

Its a great example and the game isnt that bad overall .
https://playminimum.com/

And let me tell you the game looks very similar ingame to these renderers. There are minions, ships, trees buildings and overall scenario for inspiration.

smoth wrote:blocky and zombies are 2 of the majorly played out things in gaming these days. That and roguelike, mmos or HEY GUIZE I AM MAKE MOBA NOW! etc.


So are giant robots, but we all still love 'em
Top

by that logic flozi, so are tanks.Yet the entire games are not tanks, aircraft etc. Even in scifi's example the red and gold robot clearly isn't using primarily squares. I get your jab but I reject it on the premise that >1/2 of my units are NOT robots. Just saying. Even more so I struggled to make the units similar but different enough for them to still be interesting while maintaining a theme. If you look at his lego looking aircraft you will see more varience of shape. that is what I am talking about. The point is that he could make the model more interesting by fusing some of those cubes into L shapes etc. As it stands he has a pretty render but not a pretty model but varying the shapes he can add a lot of visual interest.
Top

(yes some minor issues with AO bake, but some tweaking might help)
Top

You know smoth, im actually all for this art-worked-out stuff. Im doing it myself.
But after years of deving- i can not stop to notice - that they get stuff done.
Fast. They find out day one, that a idea dosent work.
If find it out after a week of work.

Result: Style beats Artwork. And its a faster production method. And if one thing is necessary with a game, it has to get playable fast.

Thats why JKs metall shadder was so pure awesome. And would have been even more awesome with some randomized, symetric, mechanic and glowy teamcolour stripes.
All those naked models would be instantanously textured, ingame and "good enough" if there devs throw the dice for some time.
Lord Muffes SpaceShipGame... ready for testing.
The high standards we set, scare people off, when player start demanding the same.
Also they really look good. Blocky or not.

Something not everyone can create out of the box. Texturing is difficult - needing PS:CS i presume.
Needs high phail resistance to learn. 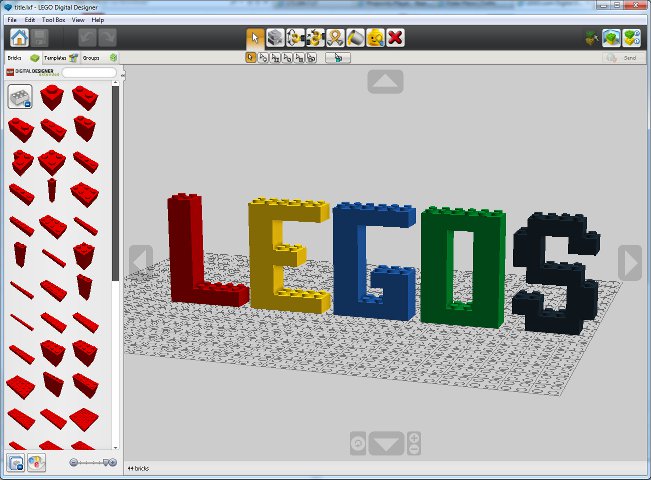 I appreciate all the comments and active discussion =)

a big unnecessary hurdle - look at jks metall shadder- now imagine if you added per face texturing with per unit randomized glowing teamcolourstripepatches- it could rock, if you dice often enough.
Top

PicassoCT wrote:You know smoth, im actually all for this art-worked-out stuff. Im doing it myself.
But after years of deving- i can not stop to notice - that they get stuff done.
Fast. They find out day one, that a idea dosent work.


it is called PLACEHOLDER ART not meant to be used for the actual art style.


Proof of what? That you can use placeholder art?
knorkes game I am not touching.
CT has has many redos as they became better at art but it was never a project they wanted to polish. I even sat down and showed them a few ways to tweak things but that didn't stick.


PicassoCT wrote:Result: Style beats Artwork. And its a faster production method. And if one thing is necessary with a game, it has to get playable fast.


No, it is again, place holders. That isn't STYLE artwork is STYLE. That is placeholder or "the best I can do."


PicassoCT wrote:Thats why JKs metall shadder was so pure awesome. And would have been even more awesome with some randomized, symetric, mechanic and glowy teamcolour stripes.

What metal shader? Also the second bit? what? you sound like you want procedural which is an entirely DIFFERENT thing.


PicassoCT wrote:All those naked models would be instantanously textured, ingame and "good enough" if there devs throw the dice for some time.


Good enough until players go "ugh this looks like crap" don't get started on the art vs gameplay, people expect both. Even the old games as shitty as they looked were they best they could do at the time. You are talking about doing a radical style that the rest of spring will not properly match.


PicassoCT wrote:Lord Muffes SpaceShipGame... ready for testing.
The high standards we set, scare people off, when player start demanding the same.
Also they really look good. Blocky or not.


Which one are you talking about now? Sorry but I have no idea which one.

Something not everyone can create out of the box. Texturing is difficult - needing PS:CS i presume.
Needs high phail resistance to learn.

Ass out of U and me etc.. Nope I didn't use photoshop at all. I just mapped it to the atlas bar uses for CORE. So yeah, if playing in wings3d for about 6 hours total to both model, optimize AND uv that is advanced by all means I am a master. However, the Core atlas used by bar is not that advanced a texture.

And very obviously lacking effort. Keep making excuses I think it is unacceptable.

if he is doing a cubestyle doing a simple atlas is easy enough. want to tell me how this model looks great due to texturing? also texturing in this style is EASY, the biggest difficulty of doing the gundam models was all the conflicting reference materials that I had to work with in trying to shape out the canonical images. 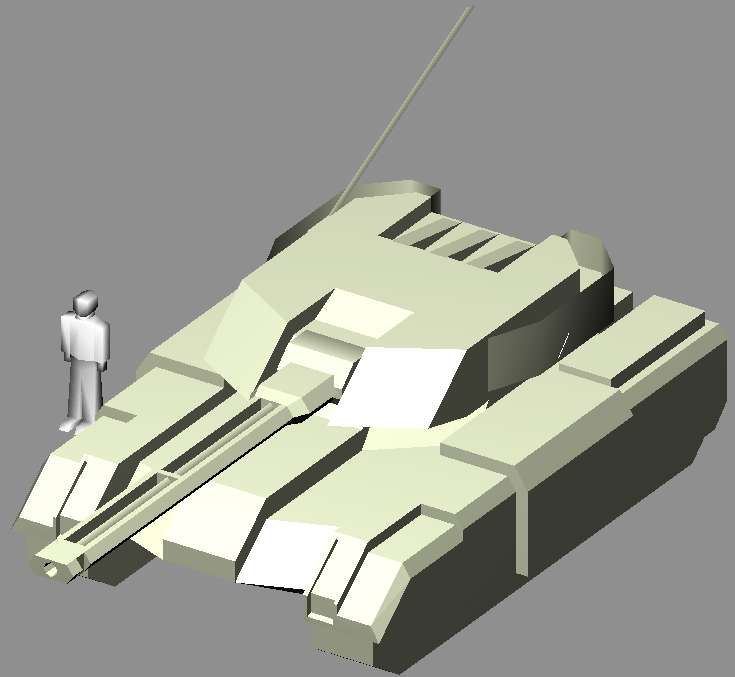 "but your new art took you soo long!" Not really, it took all of 6 hours of me playing in photoshop to get this far: 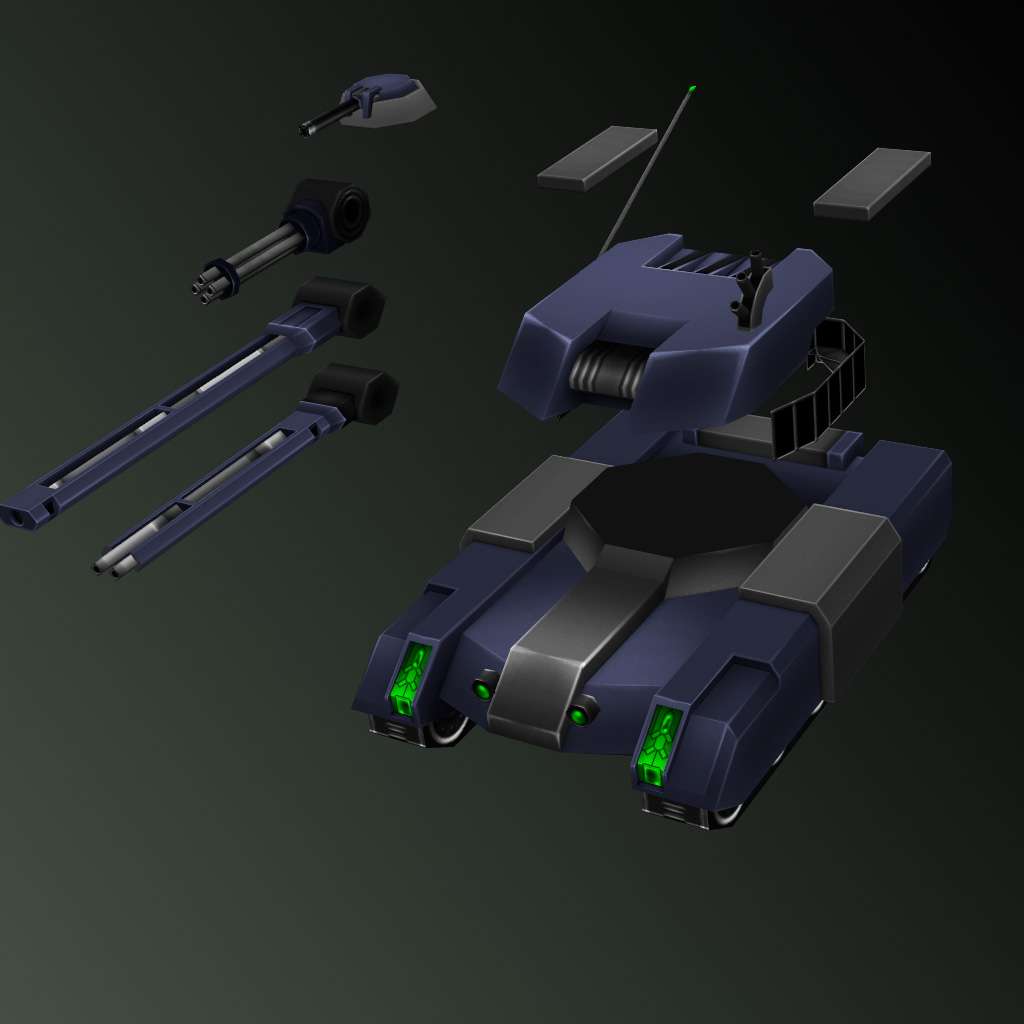 added a few greebles, which didn't take that long: 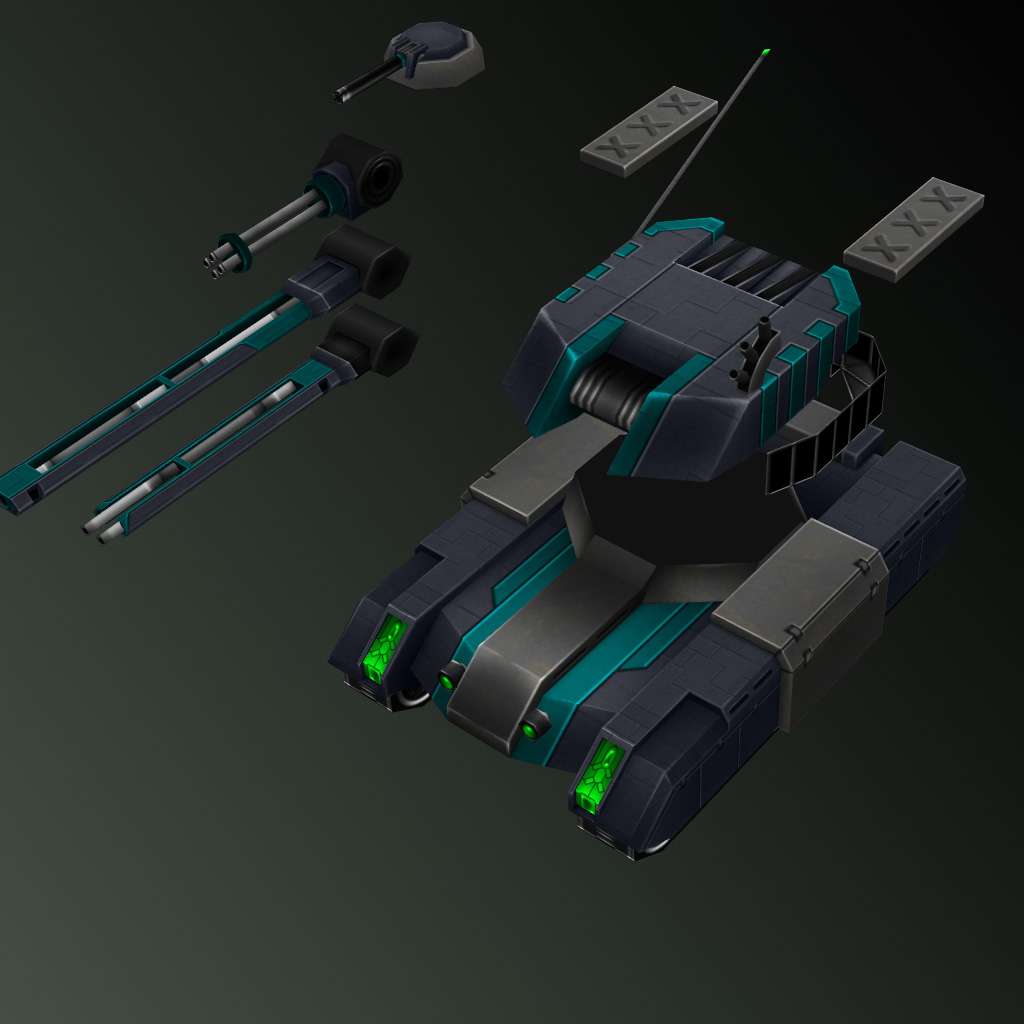 which I could then take and make all of these tanks with.

So the upfront effort payed off.

don't even say "well smoth, you have that shader" really? because I have said many times that it is public domain and have been willing to to share, even to help implement it for others. Photoshop is too expensive? oh please, you can get CC for like 19 a month and use it professionally! CC is way more advanced than the old cs3e I was using. A side note, I have yet to see a working DDS exporter for CC but you don't HAVE to use DDS despite what this community blindly follows as far a dogma. Anything with clean lines will look like crap if you use DDS compression.


BUT back to the point at hand. "Style" aside, I think his model could be more interesting as far as shapes and all of that. He could mix it up while still staying mostly to square design.

The rant is strong with this one, but all good points =]

As a side note, if you ignore the legality you can acquire Photoshop CS2 from Adobes own website for free, and there are many alternatives
Top
Locked
304 posts