lolzorex wrote:LoL, remove the dick, wtf...
Not only is it a dick its also erect?
Why does it have a mammalian type sexual organ?Why cant it procreate like a turtle or a fish? come on..
If it's realism than that thing in no way resemble a mammal so its up to you to decide what sexual organs it has and you decided on a huge penis with giant purple balls..
By the way where is the pubic hair?XD

I see it has purple balls?

They will shake with every step, physically accurate. I know you want to burn it, but there is no shop to buy it.. you mad, Censorfags?
This is the stuff were marketing would usually cut in, lacking ballz of steel. Thats freedom!
0 x
Top

you know where your rod belongs - when a moderator appears.. stick it right into that hole.. yeah, that makes us all hot.. i can see some people boiling.. and we dont want a second tschernobyll to occur.
0 x
Top

Is that a Feature Request? Bukake CEG is made fast...
0 x
Top

Hey all! It's been a while for me, but I'm in a TA mood again, doodling away. This time I'm trying to stay pretty close to the source material, but I'm taking liberties here and there just to have fun. I'm trying out stuff like giving the Core KBots standardized heads and not doing the bellbottom legs. It's a stylistic preference, but I suppose it makes sense to put the weight of the muscles/gadgets on the upper part of the leg that is moved less, while having somewhat big but flat feet which won't pierce the dirt. But, I don't like large feet so I compromised here and there.

Oops, seems I got confused and mixed together the Shooter and Freaker, :O I'll have to fix that later. Anyways, I tried to so something tricky with the toes to emulate the bellbottom pants on that one.

I'm having trouble finding ref of the original designs/models. It seems a lot of the mods use modified models. Then there's the case of the unit portraits sometimes showing a beta(?) version of a unit.
0 x
Top

I have been using a lot of your drawings for inspiration and guidance when making models.

You may have missed the significant amount of progress being made in remodeling the TA/BA stuff.

All of this is in the BA remake project :D

Pretty snazzy stuff indeed. I'm sure the SC look is deliberate, with the homogenous sort of boxy, team colored look. If I were to critique it, I would say that unit identity is weaker because of the homogeneity. But then again, TA was sort of a gray random mess to the untrained eye. I remember thinking so when I first tried the game anyways.

It's a balance of course, homogeneity vs identity. Looking at TA's Core units, their "flag colors" are silver, coal, beige cameo, construction stripes, red, and the red isn't that dominant. All these textures makes the TA units look fragmented, but on the positive side, you can very easily tell, say, the small rocket Kbot (Storm) apart from the Adv. one (Dominator?). Their overall shape differs a lot too. I think that's the two most important visual dimensions to think about when it comes to ... well, I'd even say character design in general. You can even take something like Mario or Gundam colors and slap on something completely different (with the original placements somewhat intact) and you'll still get a Mario/Gundam vibe. And even something abstract like craters or shadows can easily become a Mickey Mouse head or whatever.

Anyways, I think the SC style is perhaps a bit weak in those areas. There are only two very dominant flag colors, and the color placements feels "checkered". Perhaps "evenly distributed" describes it better. The boxy bits gives a nice chunky armoured look, but just as the color placements, their even distribution prevents powerful silhouettes/masses from forming, and the boxes are also very anonymous with their function and seem to act more as filler.

Wow, that was a bit of a tangent. Don't think I'm hating on the new stuff, it looks real nice. I also saw some snazzy animations on Youtube by some guy. I liked his Jethro especially. I never realized that the missile pods made any kind of sense like that.

I just found Cavedog's UnitViewer on an old backup partition. However, it's using models done before the original release, and many units are missing or have missing faces (top faces). Unfortunately both Spring .86 & .87 crash on my eeepc. The log says my intel GMA something is poop (lowest gfx settings), but .81 somehow works (only "test game"). I sat on my TA game CD and cracked it ages ago. Not having a CD drive anyways, I suppose I'll have to get it from GoG now.

Now I should color some of them scribbles up. Maybe make a unit portrait style pic? I'm thinking the background environment should vary according to unit role / weapon, to give a little visual help. It's easy to spot sea stuff already because of water color, but I'm thinking that could be taken further, so each unit portrait makes the most out of its graphical space.
0 x
Top

Its also a compromise between what can be done rapidly. If BA had a similar unit count as SC, we could afford a separate texture for each model - along with much better detail.
0 x
Top

I think your concept art stuff is great, Arne. I have often looked at your sites for inspiration.

About your observations, it seems to me they are very much from the concept artist viewpoint. There also have to be made a lot of pragmatic decisions regarding actual unit creation.
This recent and awesome video by Beherith gives great insight in some of the practical advantages of working with these models.

Interesting video! Yeah, I can see how that approach is sound. Getting a texture right is a lot of work, especially a modern one with many shaders/dimensions. And once you're done, you have to start over from scratch on the next model. It's one of the reasons why I don't do much 3D modelling myself. It takes me forever to just get the model done, and after that there's the UV map struggle, and plopping back and forth between PS and the model viewer to get the texture details aligned. I doubt I could finish a single model myself, unless it was some low poly deal with a projected texture. A acquaintance of mine wrote a program for me which turns a projected texture into a properly unwrapped one (just moves the textured triangles on the texture map to their new unwrapped positions). It's handy for me when I do Quake 1 style textures which were front projected, and then want to do proper seams for omnidirectional projection (I use Blender btw).

This almost allows me to take orthogonal concept art, use it as sculpting ref, and use it to get a basic texture down for cleanup later.

Did TA use a texture atlas, or were the textures separate? Separate is slower as I understand it. I suppose a texture atlas will support certain "best fits", especially if it's highrez with many highlighted edges, and that this can lead to a certain jumbledness in terms of color placement. The limited texture surface might also prevent one from doing that many color variations of the various texture shapes. TA could sort of get away with not caring too much about how well a texture fitted because the units were never seen up close, and people didn't care anyways.

Sorry about my rants, it's a damage acquired by my trade. Here are some new pictures. Zygote's first split.

TA assigned each face/polygon a texture, textures were not defined as a UV map or atlas, they were stored individually in a custom format named GAF, and each GAF file could hold several.

I'm not sure if these were compiled into a big texture atlas or not at runtime in the OTA engine, though in spring they are. IIRC the upper limit on 3do based model textures is 2048x2048.
0 x
Top

I remember seeing the little square textures in some editor, but I can't remember which one.

Portrait test. It's too lumpy and undefined due to lack of detailed line art, I think. On the other hand I'm not doing details smaller than what can be shown. It should be pretty close to the look of the original in terms of general shape and color placement. 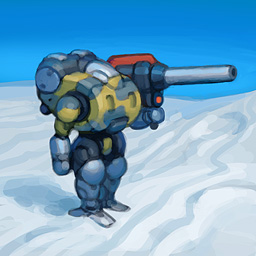