I need some low-impact, quality deciduous tree models for my World Builder project, which is finally nearing completion. I've tried various approaches, and have been very unhappy with the results- if I build a simple blob-with-a-stick, it looks OK, for a mushroom. If I build a simplistic series of transparencies, Spring usually borks rendering them really well, and the results aren't all that I'd hope, frankly- the issues of making them look acceptable from all rendering angles pops up again and again.

So, does anybody have trees that look good from all angles, do not involve more than one S3O, and are under 300 triangles? Performance is a biggie- I'd rather keep what I've got, which is fairly crappy but works, than lose performance.
Top

any trees there that you like? because i can make them .3do quite easily.

Um, if they were .S3O, with a unified skin, or you could export them in a way that preserved the uv coordinates, I'm sure that many of these would be all right. I dunno, I don't have Sketchup installed. Lemme install it and check these out. I've already looked at some alternatives, and wasn't really happy with what I found. Deciduous trees are just one of those things that resist low detail levels

Hmm. Checked the stuff you've posted... I think I'd better keep hacking away at this problem, I don't think those are going to be suitable, tbh.
Top

My trees are ass and fail but you can use them until agorm releases his.
Top

Sure, once aftershock is out, you can use those no problemo. Was goona relaese this weekend but UF wouldn't let me upload...

Might wait for the lines issue to be fixed on mapcov... or If you want them that badly maybe I can relase it sooner.

Can I ask... this "World Builder" ... does it place features as features, or does it place them as units, and If so.. is there a difference in performance? IE is your way faster than features? Only if it is it would make sense for me to use your 'World Builder' to generate the features...

aGorm wrote:Can I ask... this "World Builder" ... does it place features as features, or does it place them as units, and If so.. is there a difference in performance? IE is your way faster than features? Only if it is it would make sense for me to use your 'World Builder' to generate the features...

Though I'm too lazy to dig through right now, I believe it made things far faster, likely because spring still graphically processes all offscreen features.
Top

Grrrr... tawn between wanting to release the map and waiting for world builder...
I'll probably release it anyway, and then start on a new even more spectacular map.

aGorm wrote:Grrrr... tawn between wanting to release the map and waiting for world builder...
I'll probably release it anyway, and then start on a new even more spectacular map.

Does that mean an even more lush, beautiful map than aftershock v2?
Sweet :D
Top

A map with even less FPS you say?

The performance of what I'm working on is quite good, depending on the elements put within a map, of course. Quite a lot better than Features, and you can do some things to optimize performance a lot. Let's just say that while there is a noticeable hit compared to stock Trees, it's minor, and the amount of random interest this should bring to maps should be pretty impressive, when I have good enough content made. This is an early WIP shot: 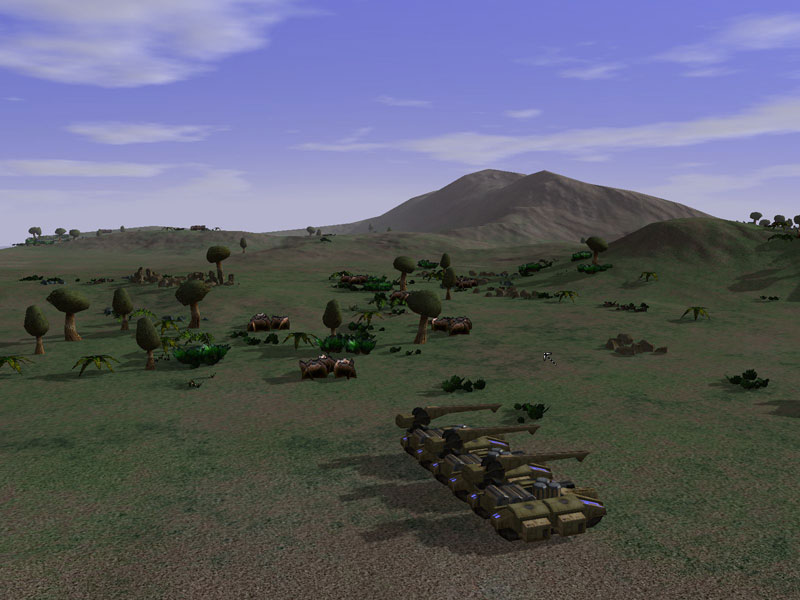 ooo. So is the aim of this to dynamically add trees, buildings etc to the map? or is it a map, with those things on it.

(im quite confused as to what your aiming to achieve

Objects are dynamically, and randomly (or not, as a designer wants- placing, say a castle model, or model parts onto specific grid coordinates will be child's play) added to a map, replacing trees (and geos, and Features in general, if desired, plus manual operations or various procedural stuff). Then I'm using some fancy techniques to further randomize the objects that are placed, so that the end result is very, very random and natural feeling, unlike static Features.

Moreover, they can do other procedural stuff. Play sounds at random intervals, for example. Random actors that can interact with players. Weather systems. Etc.

Basically, this is about procedural content, taking the load off of mappers and allowing them to build worlds in a much more natural way, that have a lot more complexity in them. Today's maps are basically like static paintings in 3D. I want to build working worlds, where it's never quite the same twice, and players have to respond to the world every time they play, and where eventually game designs can incorporate special objects into gameplay, among other things, without needing specialized maps.

To get the demo done, though, I need compelling content, so that this isn't just a tech demo, but something that can immediately be put to use.
Top

thanks for quick and detailed reply

. Sounds promising, if its not too much of a performance hit , although you've said in previous post that the hit is not too bad.

looking forward to using/playing with it :D
Top

argh, there are a ton of features in the feature resource thread. Noize and lathan have several features listed there.

Other then those features Agorm has many cool features like the crystals on his maps.. and lathan has some crystals he did for forb.

Do you need these file compiled into a large file for you?
Top

I've already grabbed Lathan's pack, which is the material I've used as a starter.

The bigger issue is getting all of the scripts and other things done, and figuring out some optimization issues. Building this is like building a very eclectic "game", basically- it includes all of the standard game elements, except that there's no Commander and no buildtrees, since all of that is handled via script. Lots of gruntwork, basically- there aren't a lot of really sexy parts, because the technology's built, aside from the non-static actors stuff, which I was going to get to after the static-content stuff is done.

If you'd like to help out, I can send you some code, sample models and guidelines, because code and clever content is the main thing at this point. For example, I'm actively considering a method whereby a single node can become a "mini forest", thus reducing multiple static objects to one large static object (which saves considerably on processing time, for obvious reasons). I've already done this with stuff like rocks and it works pretty well, I just need to combine multiple meshes / uvmaps so that this is practical, among other details(drat the lack of multitexturing in Spring, for the thousandth time...).
Top

Before I launch into coding: you still want that grid placement code, right? I'll get it done today if so.
Top

I absolutely want that. It'd make optimization a lot simpler, because then I could just skip the part where I use trees at all (of course, I will leave example code around, for mappers who want tight control over where things spawn, no fear), among other things. It'd solve a lot of problems, and allow this to run a lot faster.
Top

Okay. Here is the plan for the code. It keeps a 2D array matching the map where each cell lists the number of free spaces to the East and South. This is used for exact placement. To improve speed it also keeps an array with a resolution of 32x32 spaces that keeps track of the possible build sizes in each sector. But enough about the internal details.

You tell it you either want to build randomly in the whole map, or in a specified area. It then returns you a nice spot. You also have to tell it when spaces are blocked, which is easy enough for your units, but I'm not sure what to do about figuring out when player units are blocking areas. Any suggestions there? I could try to regularly copy the engine blocking map, but I'm not sure if it's possible, and it would likely be very very slow.

Enough rambling now. Back to work.