Oh I have no idea actually, I heard it a while ago that they were being rendered twice, more or less. Would explain why lots of 3dos put more stress on your GPU than s3os with the same polycount (triangles, that is).
0 x
Top

More absurdly, there are some 3do's with polygons on both facings, meaning you get 4 polygons for the price of 1. o_o
0 x
Top

That was made so because OTA engine didn't render backfaces, so if you had a polygon that could be seen from both sides, you had to make a second poly for the other side.
0 x
Top

The only reason spring renders it is because OTA models are all incomplete.

Anyway, got the weasel done yet?
0 x
Top

I have most of it done, I'm just fiddling around with the texture though, as the results aren't satisfying me yet, so its taking longer than usual.

Here is what I'm talking about though, as this is what's there so far.

Maybe partly due to how it is unwrapped, there are some hard angles to overcome.

I'm still trying to get a good layout for the metal and camo and will be changing things around alot I think.

The white areas on the wheels will be invisible once I get the alpha channel setup.

Final triangle count is 658, after removing the wheel caps and replacing with planes + alpha.

I don't think this is up to the quality of your other textures, MR.D.

I'm guessing the metal bars have yet to be completed, so I won't comment on them.

Basically, the mechanical noise on the skin of the car seems ad-hoc, as if you've just pasted down some noise. It doesn't seem to relate to the geometry of the car at all. I think you would be far better off with plain panelling here, and perhaps the occasional bit of greebling, which is well thought out in relation to where it is being placed on the design.

I can't imagine the core building a fast raider and it looking like that, with all sorts of (presumably important) conduits and other greebles on the outside of the armour plating.
0 x
Top

well it looks cool but I dont think all the vehicles need to be the same colour, weasel has always seemed like a little of road car to me, why not make it brown?
0 x
Top

How does the turret on top turn?
0 x
Top

MR.D wrote:Well its not perfect, but its not bad either.

In the zip is a short .avi movie that shows how it looks when it turns, I might need to tweak the center pivot a bit to get it better.

But to Zsinj, when I do panel work and bevels, I try to do as much of it in 90 degree turns as possible, doing diagonal lines on the bevels/panels ends up being chunky looking and unsmooth.

There isn't really any good way around it, except to blur that area, then you lose the quality of those lines.

Texturing isn't my slice of pie though, way too much work for such little gain IMO, especially when working with just a Diffuse map, withouth Bump or Normal mapping, all you can really do is fake the lighting, and then its always going to be from a fixed source, so different angles of light ect.. are always going to look crappy IMO.

Mostly I'm just trying to keep the textures fairly consistent between the units I'm redoing, and not going off on wild changes in style, cause I suck at it in the first place

MR.D wrote:I have most of it done, I'm just fiddling around with the texture though, as the results aren't satisfying me yet, so its taking longer than usual.

That's all I'm doing with the stuff in PURE. Looks good ingame, imo. Sure, it'd be better with a bumpmap, but meh, it's really not bad.


when I do panel work and bevels, I try to do as much of it in 90 degree turns as possible, doing diagonal lines on the bevels/panels ends up being chunky looking and unsmooth.

Look at the units in PURE, which often have cuts diagonally. Look at WZ's work on SWS units. The secret is to map it at 2X or greater of final rez, get it clean and accurate, then resize to final rez, then use Sharpen or play with curves to get the contrasts just right again- with a lot of stuff in PURE, I don't even bother.

Both of these units use a lot of greeble areas that follow the object's real geometry: 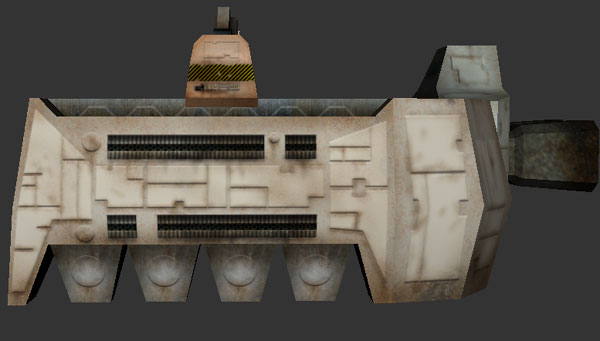 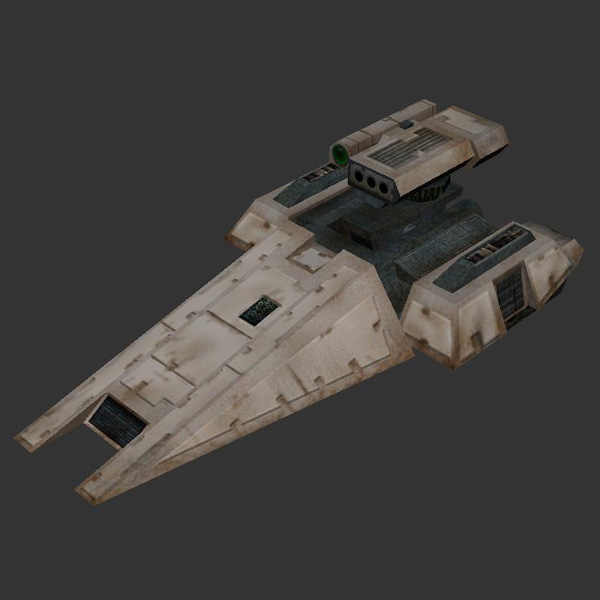 IMO, it looks just fine, if carefully worked. Pasting a repeating tile texture, however, tends to come out looking a lot worse, because it's very obvious that the texture doesn't have anything to do with the object's real shape- real-world objects tend to have greebles that reflect the real shape.

Sorry if it sounds like I'm hectoring you- I like your models, and the other skins came out very nicely. I do think that what you're facing with this model, though, is is that unlike the tanks and the rocket-truck, it isn't a collection of boxes / near-boxes- if I were you, I'd start with a dark-green texture (I think it's better to achieve visual consistency, myself- OTA's textures were all over the place, and often lacked any coherent style) and work up some greebles with simple uses of the Lasso tool- then paste the repeating texture over those areas, and try mixing in other textures, to start to achieve better greebling and better matches with the geometry. The fact of the matter is that when working with low-poly stuff... if you're not going to use a heavily preshaded approach, to basically conceal how low-poly things really are (WZ / Gnome's work on SWS contains some really good examples of this, as does Smoth's stuff for TD) ... then work with the geometry... don't hide the angles... flaunt 'em. Make them look like they have a purpose beyond performance

Again, just my two cents, take it for what it's worth.

Ah, and lastly... again, just my opinion... but I think that the minor polycount saved by using the transparency on the wheels is more trouble than it's worth. Really, you're not going nuts on polycount- the average unit in PURE is over 1K tris, and that hasn't been a major performance issue tbh.
0 x
Top

I never use repeating textures for the panel work, for my base background metal texture yea, but I always do the panel/bevels, camo and everything else by hand with the selection box and lasso which can be very time consuming.

I guess I'm just getting lazy though, but you're right, everything on the weasel is all rounded angles and curves and its something I need to overcome.

Boxes are semi-easy to do, it just seems to me that every one of these models I do, the next gets harder and harder to finish..
0 x
Top

Isn't there problems with the edges on those wheels? It must be impossible to line it up perfectly.
0 x
Top

Not when you map the cylinders before deforming them.
0 x
Top

On the note of jaggles, you are using antialiasing arent you? Taking a look at the slasher, it really looks like you arent.
0 x
Top