Compare to Indie, not Mods. Fairly big difference there.

Sc2 nerds can crap out a new rts game in a week because of the nature of the engine and it's tools. Not comparable to an indie game such as evo, gundam, zk, etc etc etc.

Anyway, Someone split this thread since smoth accidentally derailed it. Or is all this crap still on topic? Seems off topic to me, but whatever.
0 x
Top

wow you really want to take that on?

Honestly better than anything we have here right now. Listed because I actually bought them

don't get me started on older gems like gish..
0 x
Top

Personally I compared Evo against other free RTS. Ignoring other spring games, that leaves Glest, Warzone 2100, original C&C and Red Alert, Globulation 2, Bos Wars, and maybe some more, dunno. I happen to think Evo stacks up quite favourably (as do many other spring games, but still ignoring those atm).

I am of the opinion that it is a mistake to compare something free to commercial games (or mods thereof), especially when it has a solid multiplayer that makes it great for spontaneous lan parties with friends. No trying to sort out who owns what game, and who needs to buy (or more often pirate D:). You won't be wasting your money if you end up never playing, and you don't have to worry about losing support because the company went under.


Anyway
This thread should probably be stickied as information for any other devs hoping to break their games out of the rotting pit of obscurity. No matter what, the community will always be there to try to drag them back in. Good show, everyone, good show.
0 x
Top

Compare to Indie, not Mods.

Whether a game is made from scratch, build on a free or commercial engine, whether it is a mod or a total conversion is not of interesst for players.
Players do not care how a game is made.
And why should they?

Desura does not care either, look at their games list:
http://www.desura.com/games/browse

evo is currently at top because the list seems to (sorted by "last updated") but look at the other games.
good luck going up against C&C and Battlefield 2.
They are all rated by the same scale.

But wait, you can make it show"Indie" titles only!
Oh, it still lists commercial games.
No AAA titles, but 14,99Ôé¼ are 14,99Ôé¼ whether you pay it to EA or some smaller company.

I guess they have to include those titles to make their plattform more attractive vs steam but there is not even a "show only free games" button. (at least I do not see it)
There are not many good free RTS games but if evo is/was one, desura sure makes it hard to find out.

Hm, so players do not care about the background of game making, but desura is connected to indiedb which is some game dev plattform or something? So maybe those "techy" people might appreciate.
Let's look at their forum:
LETS CREATE AN EPIC MOD!!!!!!
lolwut. I did not expect it to be that bad.
The Mafia 1 multiplayer mod might have a future though. or not.

Anyway, those are the people rating your game.


To anyone who is blindly voting 10/10 because "its Spring, everything Spring is epic":
I guess it is meant nice but real feedback is much more usefull.
Like what parts you liked, what you did not like, what did not work.


devs hoping to break their games out of the rotting pit of obscurity. No matter what, the community will always be there to try to drag them back in. Good show, everyone, good show.

Still have not seen this proven.
Even those who spin people=shit on heavy rotation come back...

luckywaldo7 wrote:I am of the opinion that it is a mistake to compare something free to commercial games

tell that to desura.
0 x
Top

This thread should probably be stickied 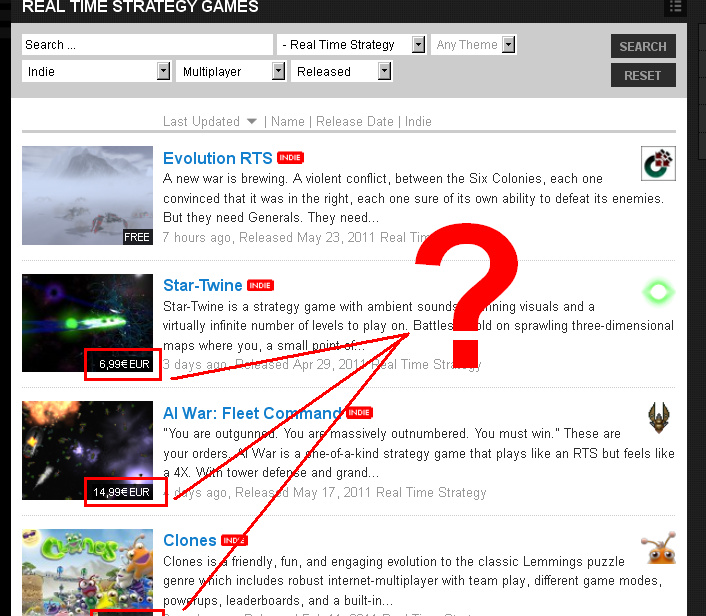 Is not the Desura integration part of the package I am considering for the Desura rating? Anyway, I will get to it, hopefully this weekend.

It is true that all games are being rated on the same scale, but very few games are subjected to the same standard. Different genres are viewed differently, different reviewers weight games differently, and all things change with time and technology.

You did not seriously bring that up in this humpty bumpty! Killing Floor is my top game of the past decade, no contest. I wouldn't rate it the highest, but over time there are few games which have been as consistently engaging or aged as well.

I have to get back to work, but please continue this discussion with civility. I'd like to see what else comes of it, and I'd like to see how Evolution RTS charts - after all, I have some vested interest in the result.
0 x
Top

Neddie wrote:Is not the Desura integration part of the package I am considering for the Desura rating?

No, it is the game itself. In your case, that would be the Ubuntu install, which is almost identical to the Desura install. Why are you thinking that you're supposed to rate the install process? O_o
0 x
Top

You did not seriously bring that up in this humpty bumpty! Killing Floor is my top game of the past decade, no contest.

ya godamn straight I did. He want to say he is a 10.. then he needs to hold himself up the light and see if there is enough substance to it or we can see right through hi,
0 x
Top

lol if you think Evo is a 10 compared to other Indie titles.
0 x
Top

Unzip a zip file to a folder. That is the desura install process.
0 x
Top

I'm still struggling to understand why you guys are putting Forb and Evo on trial when spring itself has a 9.8 rating on moddb, and nearly every other spring game is still rated higher than Evo.
0 x
Top

luckywaldo7 wrote:I'm still struggling to understand why you guys are putting Forb and Evo on trial when spring itself has a 9.8 rating on moddb, and nearly every other spring game is still rated higher than Evo.

I know that people vote 10 to give the game popularity/exposure.

But forb actually believes his game is worth a 10 and that is quite worrying.
0 x
Top

smoth wrote:Evo is at best a 7 IMO.

oh why would I have disagreed. See the fun thing I gave up on forb 2 days ago. I still don't agree but see no reason to continue to push the point. While I must admit that I am happy to see I am not the only one to find forb's feelings outrageous and honestly condescending view of the other people on moddb. I think it is wrong to continue to harass forb about it. He will think what he wants and I am not going to try and control his thoughts even if I disagree
0 x
Top

im personally not going to vote since i would have to be honest and it could be painful for evo rating. for me its 5-6. evo got same issue as gundam.

its like xmass gift - big box, with sexy paper. u are excited about how it looks like but when u open it, it turns out santa gave u sweater, similar to these in ur wardrobe.

stuff looks great, but thats all - gameplay is completely flat and boring.

funny how it apply to gundam as well.

before any of u rage, players (especially these outside spring) care about final result, not the amouth of time/effort u have put into ur game.

dont forget that commercial games, not always = EA,sc2 or w/e. ppl can create own game from scratch, just like ppl here do, but demand money for it. in case of modb and desura its usually the only difference, so its not such a huge mistake to put them together.

Star-Twine is a one-man project created by Eric Billingsley

funny how it apply to gundam as well.

before any of u rage, players (especially these outside spring) care about final result, not the amouth of time/effort u have put into ur game.

smoth wrote:l I put an 8 for gundam which was +2 because I like-a-the gundam :)

which means I think gundam is at a 6. Which is only slightly above average for an indie title at it's level of completeness.
HURR DURR wombat.
0 x
Top

ye ive seen that. i just mean that things u pointed out apply to gundam as well, what looks bit strange.

u are both stubborn and for some reason still resist to change the way gameplay works.