by Argh
Here's NanoBlobs, the way it was meant to play

Tested with multiple volunteers, with a couple of minor-but-important gameplay tweaks added at the end, to further enhance the mod. 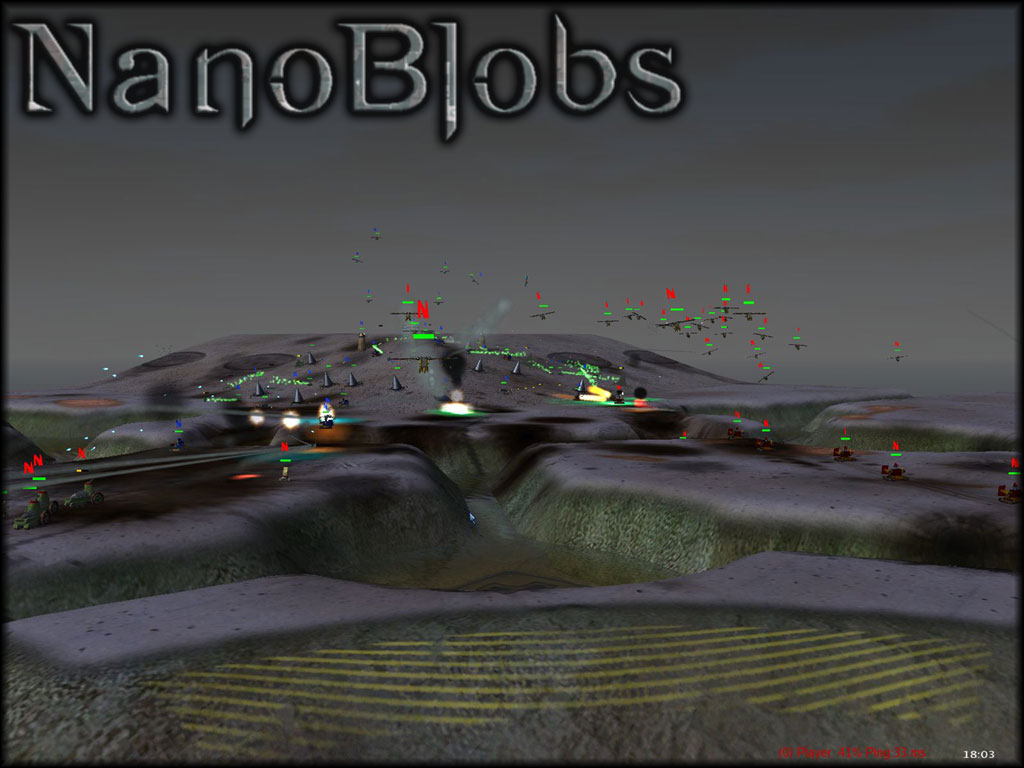 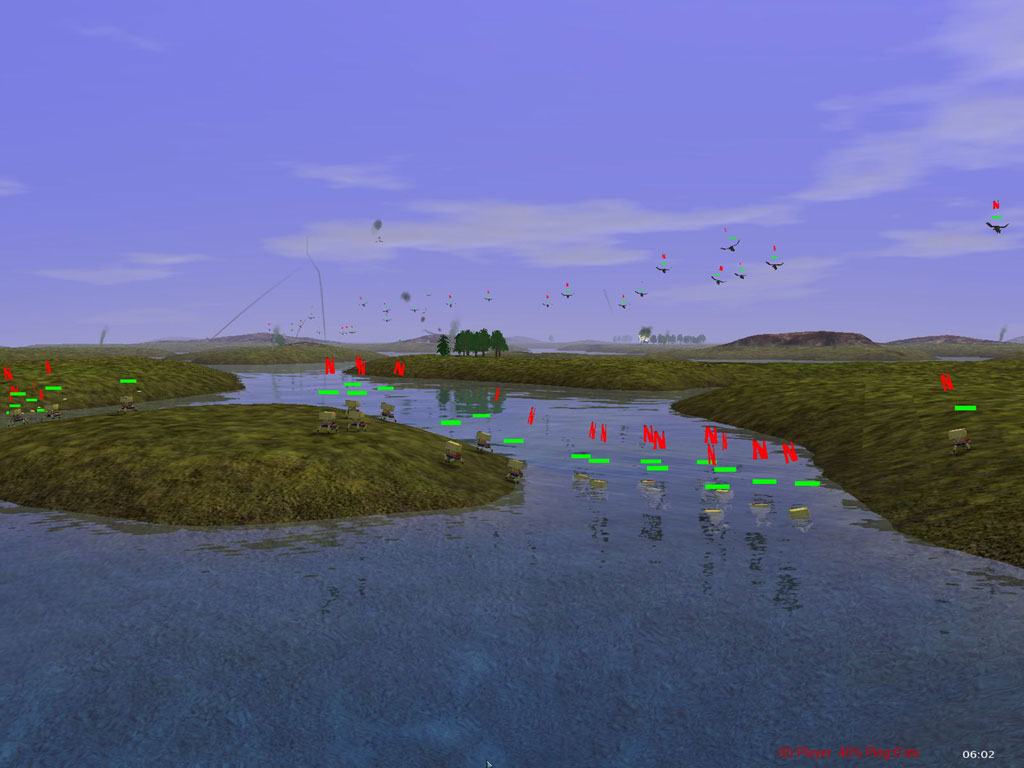 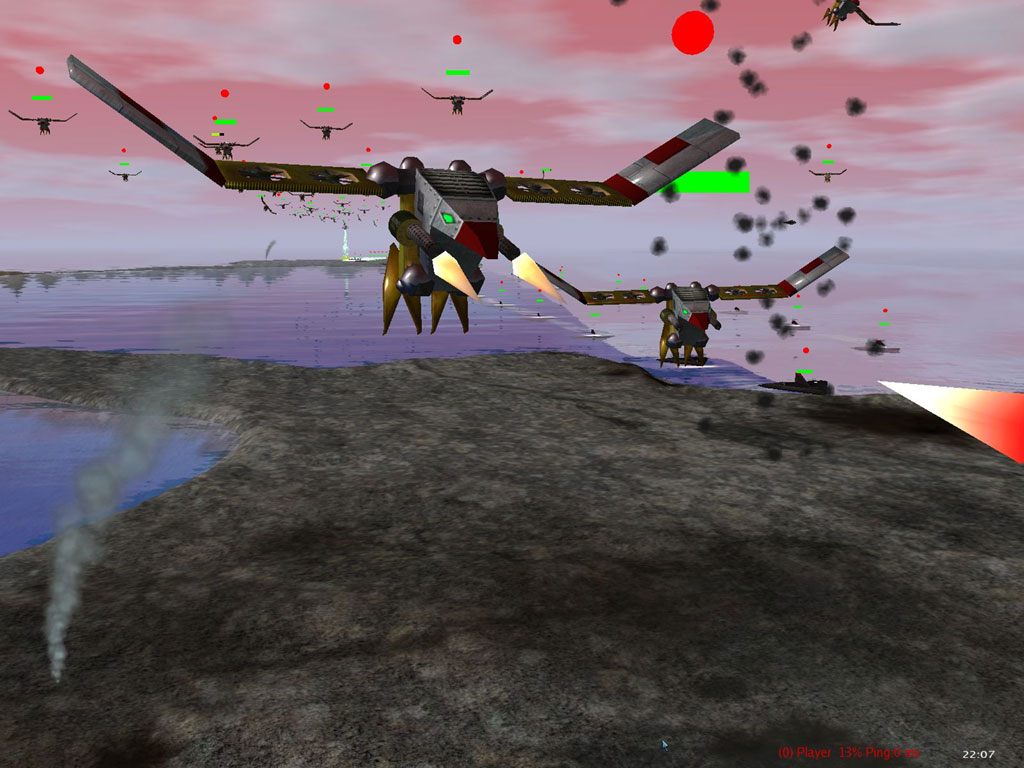 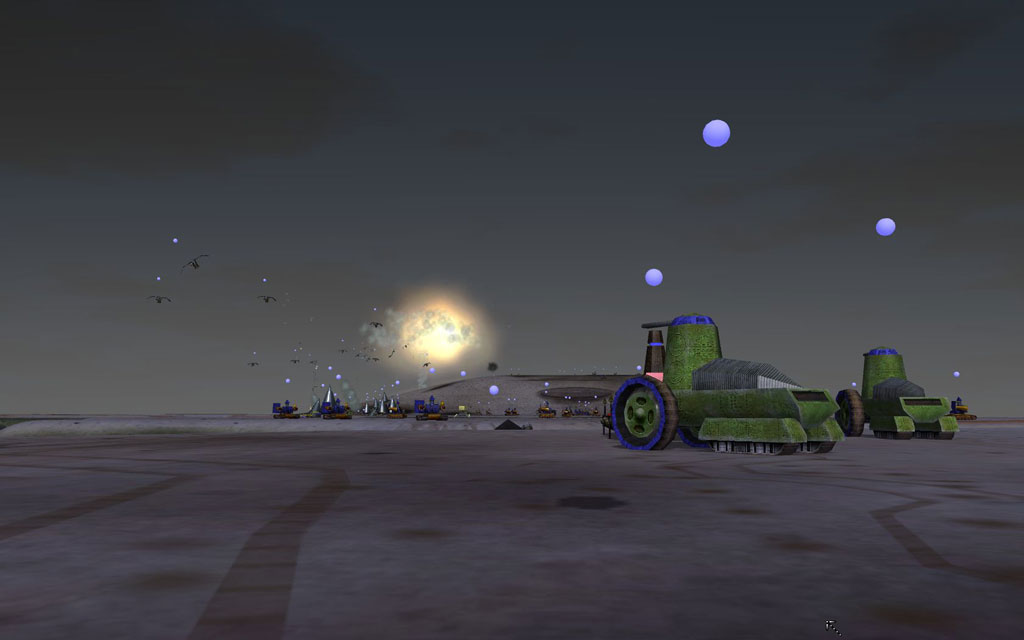 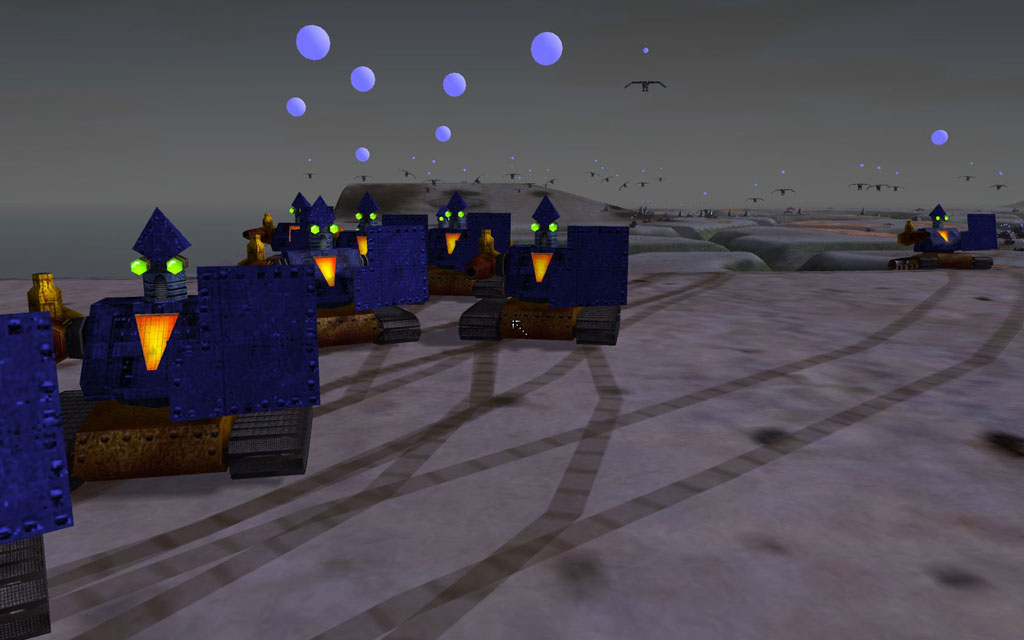 by Argh
Players Guide, for people new to the mod: 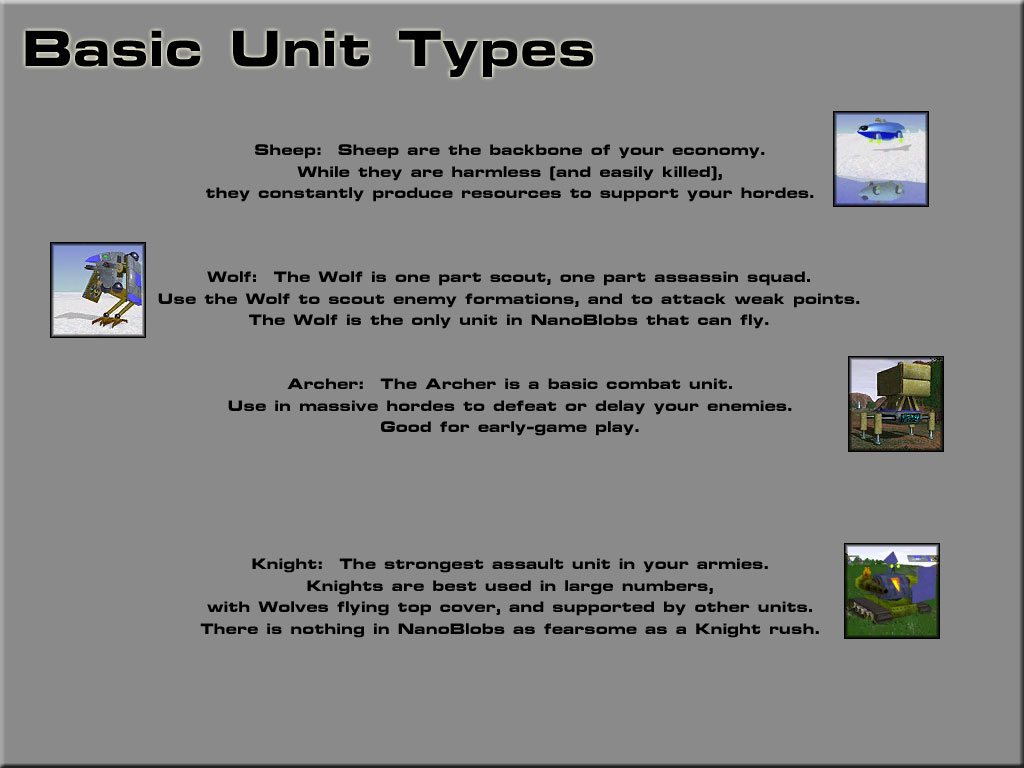 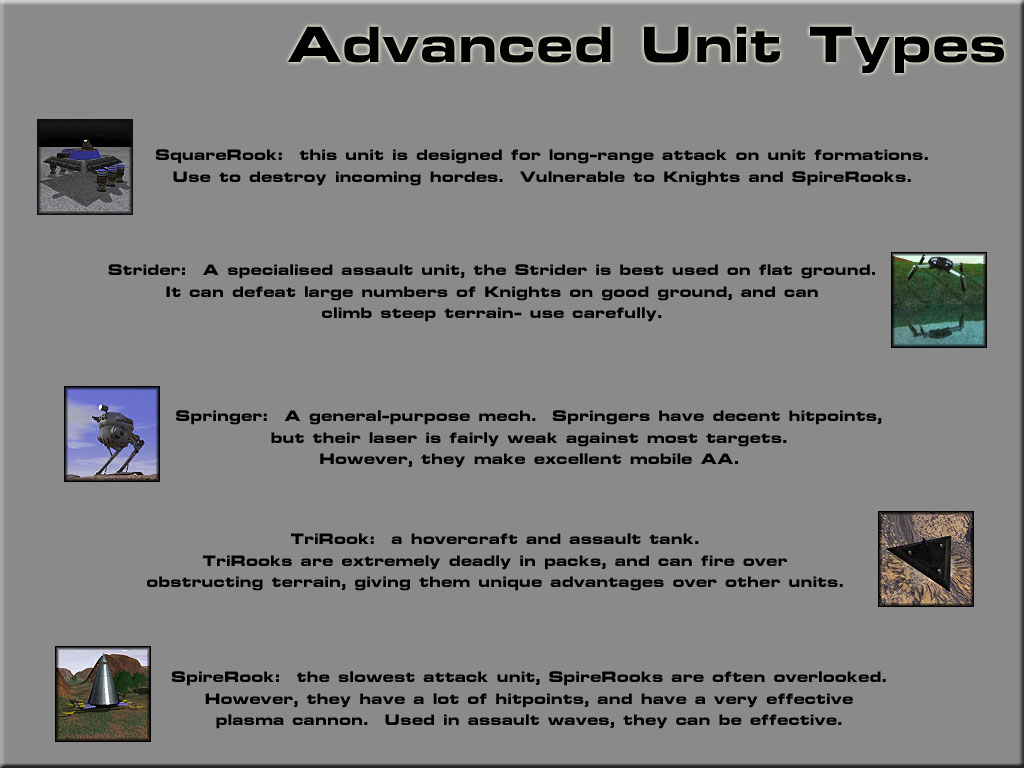 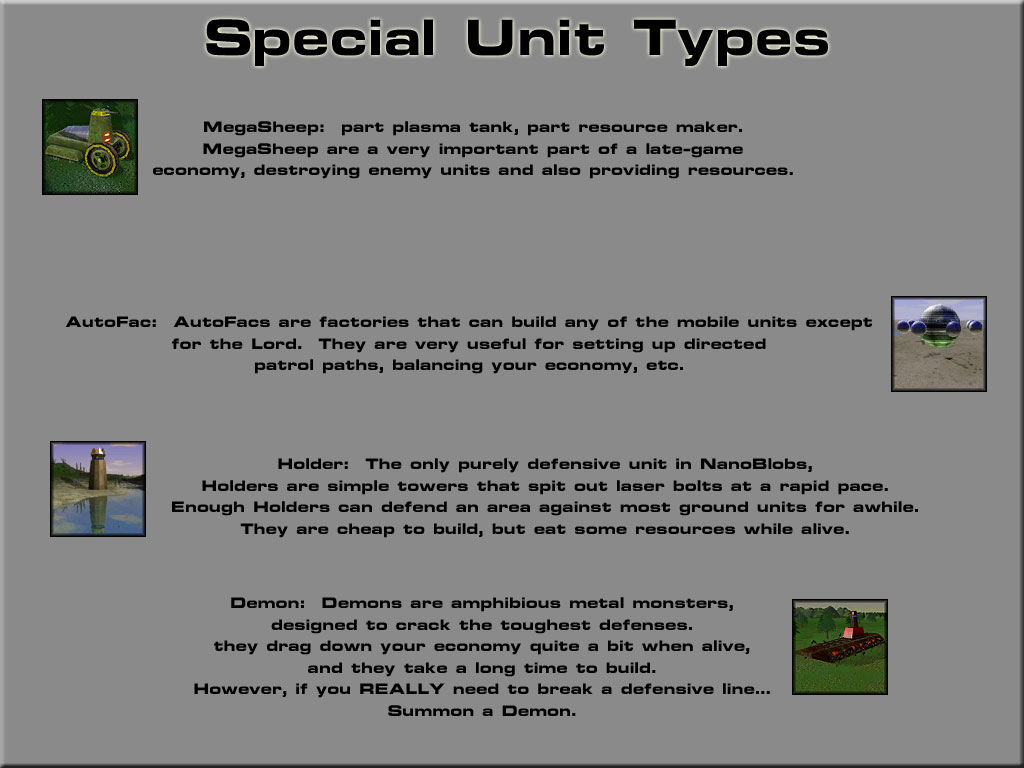 1. NanoBlobs is supposed to be completely different than run-of-the mill RTS games. Really. Don't ask me where the Metal Extractors are- there aren't any. I hate resource-gathering in RTS games- it's pointless, unrealistic, and just slows people down, preventing me from getting to the good part- killin' stuff

2. NanoBlobs requires a fair amount of skill and pure speed to play.
Newbies are welcome to try, but expect to get owned quickly, until you've mastered the basics.

3. Spamming out units randomly and not bothering to use micro is not recommended.
Good players will use the inherent balance of each unit-type against you, and defeat you.

5. Don't think defensively. There is no option to play Turtle and eventually nuke your enemies to death. There is no tech tree to save you eventually. Go kill them where they live. Now.

6. Use map terrain the way God meant you to- as TERRAIN. You're not fighting over metal spots- you're fighting for tactical advantages. Some units have very specific advantages if they're put on hills. Some cannot cross certain types of terrain. A pair of SquareRooks in the right place is worth ten of them in the wrong one.

Lastly, don't whine about the art. I built every unit to be very easy to identify and unique. And I really don't care if you don't get the visual jokes inherent in each unit

Think of them as animated, iconic and cartoony representations of concepts, not as actual tanks- it'll make it easier to understand why NanoBlobs is the way it is. Like everything else about the mod, the art is conceptual, and intentionally defies being conventional and boring.
by Argh
Here's a fun contest: what does this unit do? 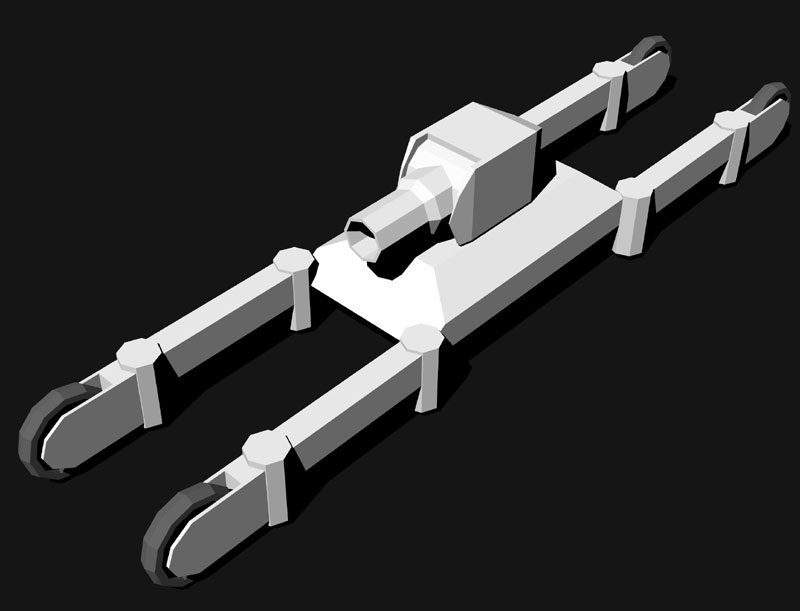 And yes, it's not done yet- still working out a few details, so don't gripe too much

Argh, were you stoned when making this mod? Are you still stoned?
by Drone_Fragger
Long range plasma bararge?
by Argh
@SpikedHelmet: LOL! Stoned, no. I don't need drugs to be creative. It just comes naturally. That, and the fact that most RTS games are incredibly boring, so I have an incentive to shake things up.

@Drone: Long-range plasma barrage... erm... kind've. What's more important is why it has the funky physical arrangement. Nobody has any guesses, eh? You're really going to dig this one

by imbaczek
looks like a tank with legs.
by MR.D
Its a lollerskate Siege quad?
by Foxomaniac
looks like a squished fatboy.

I'm guessing it's going to be an all terrain plasma bot? or a hover-plasma-bot?
by rattle
Artillery/what ever on rollerskates which is able to literally swim through the water

by Andreask
The hinges on the axis will enable to drive sideways when the scripting is done, i bet.

Just be carefull to not add too many redundant units. Sprnger and knight are very close, as well as spire and holder.
With this new unit you will have something close to the square rook, no matter what you do with it.

Also, i really hate that archers are so nerfed now, instead these stupid plasma sheep along with the square rook and all other rooks are the new artillery now. Too bad for the archers.
by knorke
I hope it'll be able to drive in lakes with only the gun plattform visible. Like the monster from Loch Ness

Andreask wrote: Just be carefull to not add too many redundant units. Sprnger and knight are very close, as well as spire and holder.

How is a slow poorly armed heavily armoured unit close to a fast well armed lightly armoured unit?
How is an immobile "machine-gun" like turret similar to a slow moving tank-like unit???

Also, i really hate that archers are so nerfed now, instead these stupid plasma sheep along with the square rook and all other rooks are the new artillery now. Too bad for the archers.

yeah, poor archers, they were so loved back ion 0.2

by Archangel of Death

Here's a fun contest: what does this unit do?

It goes in-line style for high speed movement, and roller skate style in the turns.

I also imagine it sucks on hills, and that weapon looks like it is either big aoe or shotgun.
by Argh
Hmm... some of the guesses are pretty close- Archangel gets the prize <hands out non-quite-cookies>.

This unit will have a movement speed that is fairly fast (er, about the speed of a Springer) until it wants to fire. Then the legs will spread, the speed will drop to near-zero, and it'll have a stable firing platform.

As for role... it'll be the heavy mortar. I agree with folks who're less-than-happy with the Archers at the moment- they're the only unit in the mod that I feel is nearly useless at the moment. Now that the Springer's in, and serves the mobile AA function so well... I'm very, very tempted to make the Archers back into what they used to be- mortar rockets for saturation bombardment purposes. In between them and this new unit, they'd really give that part of the game more oomph- speculative fire's almost entirely impractical right now, and area-bombardment for offensive purposes rarely happens

by rattle
And how are you going to change the speed? Slow acceleration?
Too bad it's not possible yet by script...
by Argh
From changelog for 0.73b:

by PauloMorfeo
I tried this out. Quite cool.

It has a very unique style, for sure. The daemons are quite cool (is the sound of it's weapons hiting from doom 3?). The comander has a style that reminds me of Darwinia. In fact, the whole mod reminds me of Darwinia for it's uniqueness:
http://www.darwinia.co.uk/about/screenshots.html
Even though nanoblobs is less consistent and more varied.

Quite fun. And doesn't massacres my CPU anymore.
Although i don't think i would ever play it in a map bigger than nanowars(?) as i have no idea how i could possible win with my Duron 1300...

If one likes to see huge fights of great masses blowing up, this is the one.
by rattle
Yeah I know, that's why I mention it... get MAX_SPEED results in 65536, set MAX_SPEED to SomeSpeed*65536 did nothing and MAX_SPEED was defined.
Perhaps I made some mistake again, though I'm pretty sure I didn't this time...