these models are adorbs

Will there be a unit that is using the "Grenado" as a ammo and launching the latter unit?

Grenado is a relatively big fat robot. The launcher would have to be huge.

I remember at some point there was a mobile vehicle that shot peewees on some TA mod. Maybe a grenadOlauncher could launch mini-grenados.

maybe a pseudo-transport that can stockpile a few projectiles that turn into controllable units on detonation...hmm.....
0 x
Top

Set the ground on fire!

there's even a section that lists all the units and some key attributes!

I just played your mod against a AI, seems to be good so far,
keep it up mane.

Also you might want to fix the Boomer aircraft because when they clump and are firing,
they are damaging each other.
0 x
Top

- modified MFAI to use the new units

Very nice, I like the direction you are going for.
0 x
Top

Thanks. I've been trying to make it easier for players to get signature units for each faction, and have the AI likely use them as well. (GEAR AI will likely set your stuff on fire, SPHERE AI will use area shields, CLAW AI uses its moderately tough high DPS units)

didn't go in version 0.88, but for the next one I set boomer's weapon to not collide with friendly units (same as other bombers). I do want to avoid these kinds of exceptions (they shouldn't be clumped together).

for AVEN i'm thinking of adding a special aircraft named Zephyr that speeds up movement for allied units in a radius and drains some energy.

- onslaught mode : something like "chickens" where a very tough building will spawn instead of the commander and periodically spawn progressively stronger armies nearby and send them to attack its enemies
0 x
Top

- increased base energy income from 30 E/s to 60 E/s
- changed starting resources and storage from 1000M + 1000E to 1500M + 4000E to speed up early game
- fix wind generator income (boost given on v0.8 wasn't being applied), and added a bonus of up to 20% more income on higher ground
- increased durability and slightly increased cost of wind generators, solar collectors and tidal generators
- "alive" enemy units can no longer be reclaimed
- friendly units are now progressively reclaimed

- fixed GEAR "Canister" and "Eruptor" setting ground on fire when canceled or reclaimed
- reduced fire burn damage to 180(M) over 6s (still 30 dmg/s but lowered duration from 10s)
- increased fire area damage per second from 5(H) and 10(H) flat damage to 10-20(M) and 30-60(M) for small and big fireballs, respectively
(note that fireball damage stacks, unlike the burn damage)
- increased cost of GEAR "Eruptor" by 30%

- reduced paralyze max stun time from 10 to 6s but scale paralyze damage with target's missing health % (up to 200%, but doesn't affect the normal damage fraction)

- fixed metal spot detection (the previous algorithm could ignore spots in some cases!)
- improved AI compatibility with metal maps
- map data is only loaded once and shared by all MFAI instances
- AVEN uses "Kodiak" vehicles properly now
- avoids building level 2 plants if low on energy
- fix a situation where all AI's builders would be all be assigned to specific tasks and skip the standard queue
(this could lead to situations where it delayed building several plants, including level2 for too long or not build them at all)
- fixed some issues with AI not morphing its commander
- fixed AI builders getting stuck trying to build structures on places they can't reach

The Zephyr flies around, spreading happiness! - changed CLAW "Longhorn" armor type from H to M
- reduced range of CLAW "Bishop" missiles from 1200 to 1100
- decreased cost of GEAR "Grenado" by about 20%. It can now be carried by level 1 air transports
- reduced SPHERE "Bulk"'s range from 550 to 500 but made it about 7% cheaper
- replaced SPHERE "Gazer" weapon with a beam laser with lower reload time (same dmg/s) 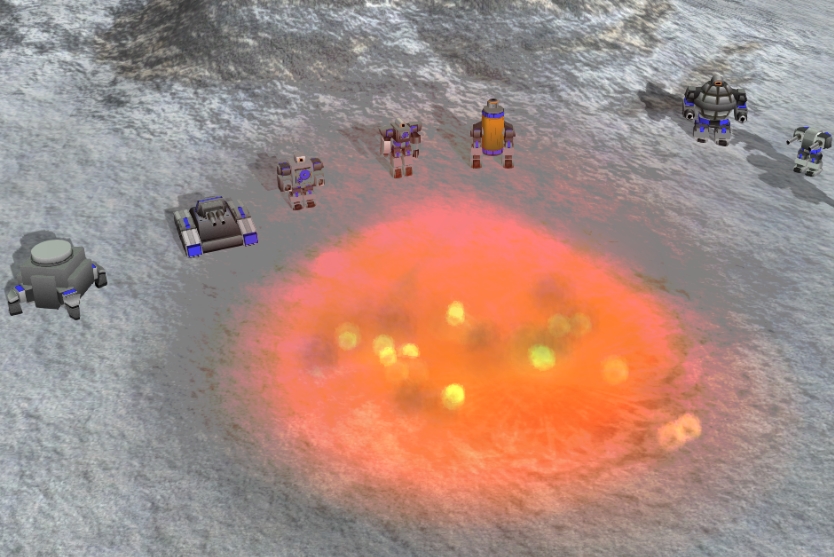 - increased HP regen on commanders from 4/8 to 8/12 HP/s
- made very long range artillery not miss immobile targets, but still miss moving ones
- units now also gain experience from being damaged by enemies
- SPHERE Commander can now be lifted by level 1 air transports

Nice, i tried teching up right at start but that didnt work out for me, il try playing properly in the future.
0 x
Top

Fast-tech should be viable in some situations, especially vs AI as it doesn't rush. Tech tree on MF is flatter than the typical TA-derived game (not as flat as ZK, though).

You can start with a nano tower near a cluster of metal spots, expand with the commander and let the nano tower build the extractors and energy generators, basic defense and then a level 2 plant (which in MF costs about twice as much as a level 1 plant, instead of 4 times).
0 x
Top

- changed nano-towers from the "OTHER" build menu section to "PLANT"

another update, same link as before

- greatly increased terrain slope tolerance for buildings
- standardize idle time for units at 25s and idle HP regeneration at 2 + (0.3% of maximum base HP) per second