A full python implementation of mapconv. With GUI. Also supports full decompilation and recompilation.
The only thing it doesnt do is lossy tiling smt compression, it does do lossless though.
On 32bit machines it compiles 32x32 maps easily.
Very verbose error checking. EDIT: Now includes a windows binary so that python is no longer needed (prebuilt pymapconv.exe, make sure to keep all the other files next to it though!)
Top

Interesting. Didn't try in detail but on Linux I needed to change one of the imports to:

Beherith only does awesome
Top

How many mapconvs does this make now?
Top

It started off as a decompiler, but I figured its not much extra to do the compilation once the framework is in place. I think this is number 5 in the list btw ;D
Top

This pretty much blows all other mapconvs into instant obsolescence. Thanks Behe, this is really cool.
Top

Nice one, if it is as straightforward to install and use as it seems then this will be interesting.

I wonder how well it performs compared to SME, gajop mentioned something about optimizations, i have no idea what he means tough.
Top

I was talking about lossy optimization.
We were discussing whether or not an official compiler distributed with spring (and maybe even in-engine) should exist. One of the things I said was that if implementing optimization is non-trivial, and could be done in many ways, leaving room for unofficial implementations would be preferred.
Some people mentioned that we had too many existing compilers, most being unreliable.
This was before behe released this, incrementing the $map_compiler_count.
Top

my 4th gen Corei7 processes this file into an smt in 40 seconds and uses under a gig of ram.. how does that compare to pymapconv?
Top

Its pretty fast, but the bulk of the load is compressing the texture to dds with nvdxt. With the highest quality settings that are enabled by default, it can take a minute or two. In quick mode its under a minute.
Top

After some very annoying figuring out wtf... I found out the following.

Using on windows when you don't have python already installed can be kind of annoying, but it's not too bad.

I found it interesting that it uses TIFF as an intermediary. This is good and should yield higher quality results.

Craps itself (not really, it just won't go any further) if you feed it an rgba heightmap (with only greyscale in it).

I found this more than a little annoying: 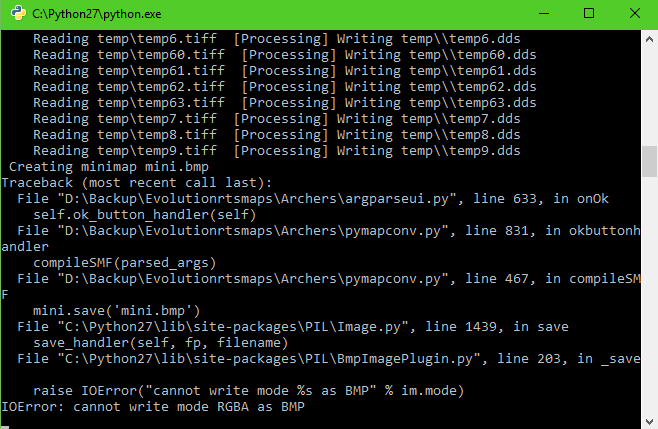 Added file open dialog buttons so you can quickly select your files for compilation without having to type them in. Also fixed compilation under linux, and headless compilation works as well if you specify command line arguments.
Top

I have compiled pyMapConv to exe for windows users

portable and setup versions can be found here: