That'll be quite the walking script to write...
Top

Nope. It'll be a piece of cake. I am using the zszwg method

He reminds me a bit of Bubo the clockwork owl from Clash of the Titans.

Argh wrote:Nope. It'll be a piece of cake. I am using the zszwg method

I'm going to be using some simple turn commands, basically. It'll be a little tricky, because of the angular limitations imposed by the hydraulics, but not that bad.

I'll have quickie skinned shot up very soon. And I'll offer a prize...

The first person who correctly identifies the famous artist who this piece is actually referencing can name this thing, so long as:

A. The name isn't entirely silly. No, I'm not going to name it the "Cheese-Head PeeWee II" just because you googled around

B. It somehow fits the theme of the unit in some way, given what it looks like and what it's meant to do (basically, it's going to be paired with the Strider as a complementary balance sort've unit, for mid-speed strikes against defensive gatherings).
Top

No takers? Gee, I'm disappointed. Maybe I didn't copy his work fastidiously enough- I still wanted it to have echoes of my own style. Maybe it'll help seeing it half-painted: 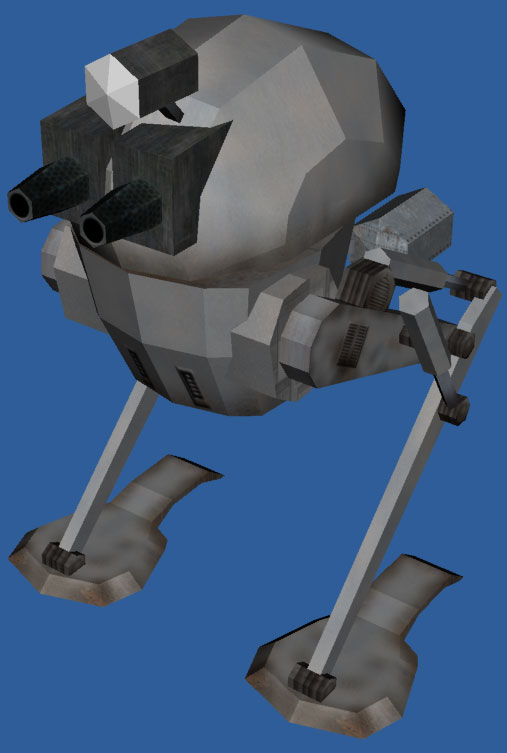 ... and for the record, no, I am not completely wedded to the dark-steel look for the gun-boxes, and am thinking I'll just make them go with the rest of the beat-up Field Gray. And I'm not nearly done with nicks and stains yet, of course, so please don't judge it too harshly.
Top

Argh, thanks, in plenty of ways..

DUH! Of course I need to have some rust or something on a tank..

I was wandering how I would make a good metallish texture...

Looks like a brain with night goggles on legs from the walking things in Star Wars. (Not the really big guys but the smaller walking things.)

AT-ST
AT-PT looks a lot alike as well
AT-RT, but its small and has an exposed pilot

um... make this one the strider, and call the current strider the Spider
Top

Weaver, Bubo Bubo is the Eagle Owl which, yeah, that model somewhat looks like. Except Bubo Bubo has pointy ears and flies silently to snatch its prey, a name more fit for a stealth bomber perhaps. And it makes the eerie sound. I think it's Uhu in German.

And the model needs a tube to connect the foot plate to the calf, it looks a bit wonky / unstable now?

Name? Maybe an ostrich or dodo, any flightless bird really. :)

edit: the model looks absolutely cool and original as many of argh's do!
Top

The artist in question is Kow Yokoyama, who is one of my many references for inspiration when I'm out've good ideas

Ok, name time. "Ostrich" is actually used by a MA:K design, and I want to be careful about names, just as I am about the design, to make sure it's mine, and can be released under the Creative Commons Public Domain standards. Therefore, while it's not a bad name (ostriches are nasty if you make them mad, and they're quite large), I don't think that'll work. After thinking about it, I decided on "Gamecock", which will be misunderstood by many of the Beavis and Butthead variety, "he said 'cock', hehe, hehe" but I don't care

If you don't know why I picked Gamecock, go read it on Wikipedia.

And I'm still tweaking the final model a bit- I have some spare texture space, and I'm going to use it, and my tricount's just fine, so I see no reason not to add a few things. I think that the guns are disappointingly un-detailed, and that it could use a few more greebles here and there- just small stuff that adds that last element of "cool". Polycount for the shot above is just over 1000 tris (to put it into perspective, that's less than the tricount on the Archer, which any player generally has 50+ of at any moment). So expect the final model to feel a bit more detailed and a little less cartoony.

I also agree with the poster who said that the feet need some more support, so I'm going to add another actuated joint. That will bring up the total number of Turn instructions per leg to 7, which is quite a lot, but I'm wanting the animation to really convey a sense of mechanical soundness and accuracy... and I think it'll be worth it.

This is going to be a fairly expensive unit (it's a "16" size- so, twice as tall as a Archer, approximately) so I don't think it will be overwhelming on the animation side. To put things in perspective, that would be the same as the current SpireRook animation, which has 12 ongoing Turn instructions per cycle, and runs very smoothly without a lot've CPU load, as you will see in the next release.

So, about 4 hours of painting and animating to go, and I'll post it when I get done tonight. But I'm still taking care of all my IRL duties at the moment, so it won't be for about 8 hours or so from now.
Top

That stuff looks familiar, have you posted links before?
Top

Not that I can recall... that's not saying much though 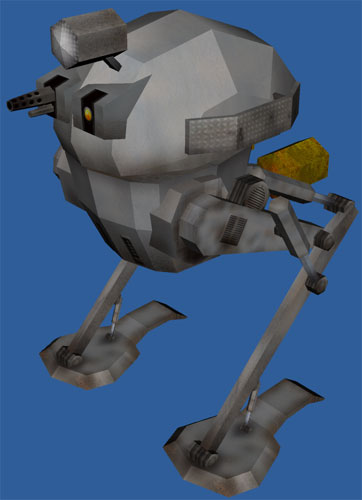 Final cut. A little more WWII flavor, more dirt, some ankle support, a teensy bit of color to set it all off, and various small modifications and improvements. Now it's ready.

Just tried out the version I've got. You might want to change those invisible projectiles you get the fire with on the lava shell thing, (I have no idea what you call it sorry), they seem to fall short half the time.
Top

Can't, I'm afraid. It's a feature of Spring- it dynamically aims the burst after the target available dies or is no longer in LOS. I've already asked for a tag to disable it, but I don't have the time or enough familiarity with Spring's aiming code to write the tag myself yet. It rarely is a big deal, gameplay-wise.
Top

Pity, it is a neat weapon though. Maybe EE needs a magma bomb?

Got the animation for the new unit done. It looks great, but in the end I was forced to use Spring's interpolation and frame-based animation. Kind've a bummer, but it works just fine that way, and all of the complexity is there in living color. I'll put up screenies when I'm done with the glow/reflec map. Then I have one more new unit to do, and I'm going to finally get around to rebuilding the AutoFac, which was always meant to be a stand-in model...
Top

What's going to shoot that nuke you were going to make?
Top

Well, I was saving that for my self-guiding, terrain-following cruise missile.
Top
Post Reply
115 posts