Just got a crazy thought that might (or might not) solve your pathing woes, since you're doing hover vehicles and not cars: why not make them super-low-flying gunships? I mean, I don't know what happens when a gunship collides with a land unit, so it might not work, but gunships naturally go in straight lines.
Top

Dunno, I'll try it. Doubt if it'll work, but what the heck.
Top

Bizarrely enough, it almost worked. However:

1. The unit "pogos" constantly, because of the hard-coded behavior of the MoveType's ground-avoidance.

2. I had to turn collision off to get it to behave correctly with the road objects.

The problem basically that the pathfinder wasn't designed for this, neither were any of the MoveTypes. I can live with robot cars that have some gimpy behaviors for now, it's cool enough to see cities where they're truly alive. Time for a new map, and some of the other toys.
Top

looking good man, the cities are a real spark to the imagination. the syndicate cars gave me a smile, imagining my bots running out to the road to hail a cab

a few questions and requests... possibly foolish ones...

question : these cities are all built using LUA ingame if i'm not mistaken... what happens with a LUA crash? does that affect the worldbuilder stuff? heh i'd hate to be mid-battle and suddenly have just about everything disappear.

question : have you considered using vector paths to draw your roads? not sure exactly what sort of information is used to make the existing roads and control movement over them... but perhaps a vector based solution is better than using straight lines or squares... im picturing adding a startpoint and an endpoint wherever i like, then worldbuilder would apply a small but repeating ground decal over the top to join the two... add in enough intermittent points, and you'd have a nicely drawn curved road, possibly compatible with the existing worldbuilder software... if i have a bone to pick about how good your worldbuilder-generated maps look, the only thing i could complain about is the squared-off nature of the roadways... sure, the roads of most cities in the world are probably dominated by grid structures of this type, but there is always that one road running on a funny angle or bisecting other roads in a large curve...

request : would it be possible to build a featuremap file \ TDF structure for a map using worldbuilder? what i'm picturing doing... i would make a map without features, compile it, then jump onto spring to use worldbuilder to position all of the nice buildings and such... then, export a featuremap and recompile the map with it... et voila, i'd have a completed map using my own roads etc, but with beautifully positioned buildings!

request : could you make the buildings etc available as a feature pack for mapmakers not using worldbuilder?

Argh wrote:If somebody's bored, I'd like a model of some sort of horse-like critter to animate running around a gameworld, and maybe a robotic taxi or something for the demo movie. Preferably skinned, if you can find the time, as I have some IRL stuff going on this week.

I can offer you:

Very ugly, and I wouldn't call it skinned, but! The unit is already complete, with walkscript, sound and all. It's one of the two units in that sd7 (that I ought to update some day but at least since the FPS detection is broken you won't even have to remove it).
Top

KaiserJ wrote:question : these cities are all built using LUA ingame if i'm not mistaken... what happens with a LUA crash? does that affect the worldbuilder stuff? heh i'd hate to be mid-battle and suddenly have just about everything disappear.

Lua crashes are localized in gadgets and a unit that was created with Lua is not affected by what happens to the Lua afterwards.
Top

@zwzsg: Hey, cool, thanks. I'll take a look at it- maybe a new model to go with whatever sure-to-be-cool script you've done? After all, the model's the easy part...

@kaiserj: Here are a few answers:


question : these cities are all built using LUA ingame if i'm not mistaken... what happens with a LUA crash?

Basically, everything is all right. All World Builder scene elements are Units (not Features, with very few exceptions), and, like the Units that you're actually playing with, they continue to function, even if LuaUI / LuaGadgets locks up for some reason. That said, while I've seen plenty of crashes due to my own mistakes while programming this stuff, I've never seen one that was caused by World Builder elements after the initial scripts run, primarily because it just doesn't really use a lot of Lua after that (except for a few very minor things).


question : have you considered using vector paths to draw your roads?

Using vector paths, no. Drawing them entirely with OpenGL, yes. However, there are a lot of obstacles to doing so, and I have yet to find solutions for many of them. So, for now they use Spring's native code for handling groundscars, etc., which isn't perfect but works for most people and conforms to the ground, etc. correctly.

Building a system that allows for totally freeform road-building like you're describing is theoretically possible (atorpy's L3DT has some tools to do it, for example) but I'm totally unfamiliar with this area of computer science, and I don't think I'm likely to solve that problem. Given that World Builder is Open Source, it's certainly possible that somebody might be willing to lend time coding that for it at some point.


request : would it be possible to build a featuremap file \ TDF structure for a map using worldbuilder?

Essentially, that's how it works, only instead of writing a bitmap with a special encoding, etc., like the current featuredef format for SMF, it writes a Lua script the does the placement during GameStart.

This has lots of advantages:

1. If you don't like the results, editing it is easy, fast and intuitive. Just fire up the map in the Editor, change the map, save the script, and you're done.

2. You can port a script from one build of your map to another completely transparently.

3. You, as a mapper, don't have to worry about editing text files, etc., as that's already set up.

4. Most important of all: you never, ever have to recompile the map to see the results! So, for example, if you place a house on the side of a hill, and it looks bad because the hill clips the house too much in the spot you picked... just delete the house, and put a new one in, right there in Spring. Much, much more efficient workflow, because it's WSIWYG.


request : could you make the buildings etc available as a feature pack for mapmakers not using worldbuilder?

I have no intention of doing that, because I see no real advantages. World Builder was developed largely because I was unhappy with the way that Features were handled. They can't be animated, until Spring 0.77, they weren't using LOD in a way that made any sense, and even now they're not nearly as efficient, object for object, as World Builder stuff. It takes a lot of precious CPU to show huge, complex scenes like a city to people, so I've done a bunch of things to make it faster that you just can't do with Features. Plus they can blow up, make sounds, interact with players in any way game designers feel like, etc., etc., etc., which Features can't really do.

That said, it's an Open Source project, and I certainly wouldn't have any objection to someone else doing that, if they thought it was useful.
Top

world builder always makes me twitch deep down inside...
Top 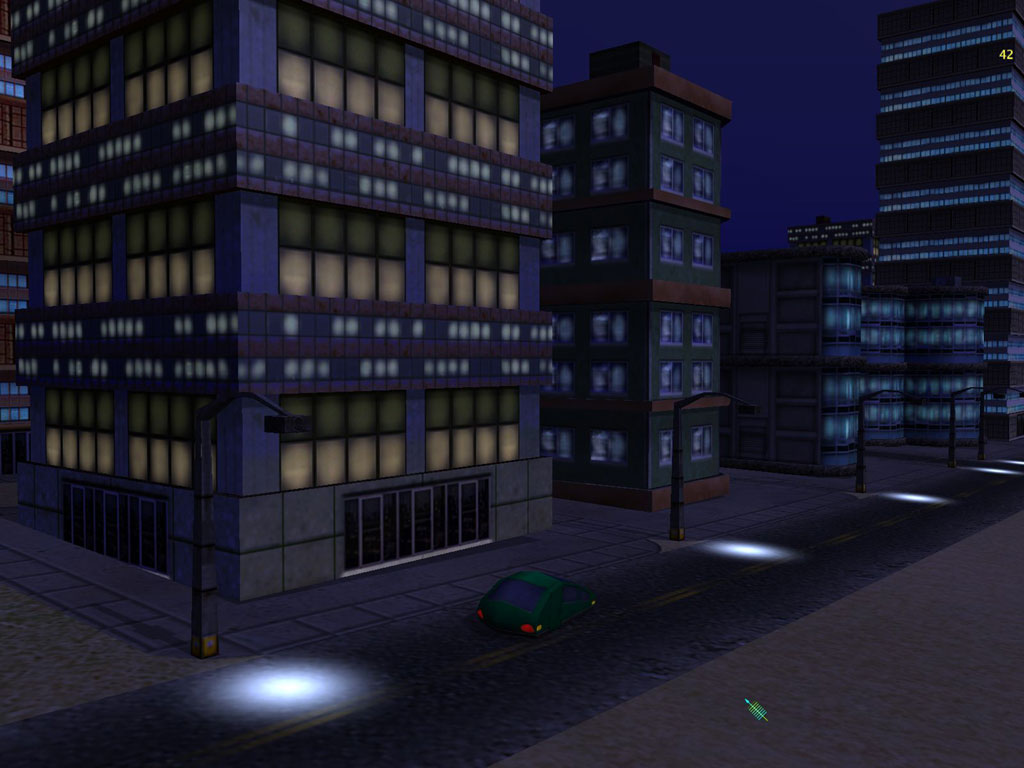 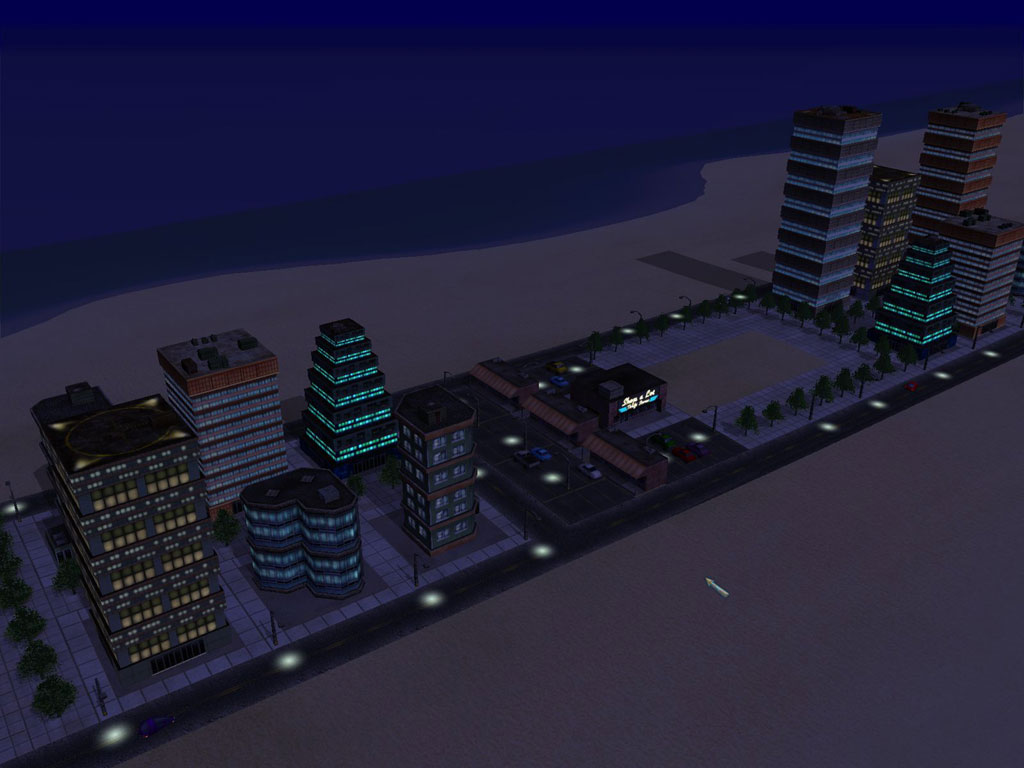 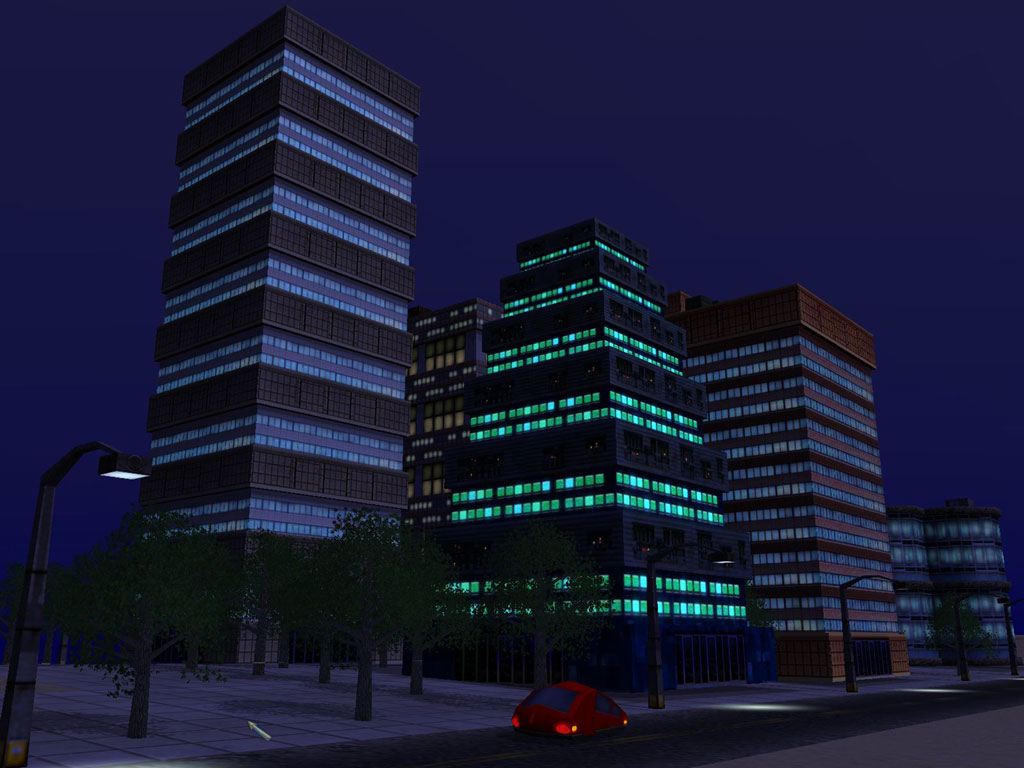 So...all these cities are nice but when can we play pure?
Top

Hurry up and release, my days are really boring

I'm hoping to wrap up RC4 before Christmas, if at all possible.

The last major game-design changes were made awhile ago (things build faster, resources have been fixed up for both sides, buildings are now capturable and able to be occupied, a bunch of other little things have been fixed), but content is the single biggest roadblock (Help O' Matic needs to be made better for low screen resolutions, I need to finish detailing out the new UI, I need to get presentation stuff done for Satirik's new UI for games, etc., etc.).

I'll see about sitting down with Help O' Matic tomorrow, that's just plain grind work. Tonight, I need to finish a project I'm working on to improve the graphical quality of the trees that I'm using, and optimize them a bit better for performance.
Top

* votes for a wider glow on the ground for the streetlights

Does it look weird when units drive under the street lights and the light goes underneath rather then over the top?
Top

Agree with Zsinj. The street scene is incredisexy, but the street lights are a visible flaw - the light they generate is too small and sharp. Remember that the point of a street light is to illuminate the street. Those ones are doing a piss-poor job of it, and the viewer notices. the decal needs to be larger and less opaque. Although looking at it, I can see the geometry reasons for its small size... but at the very least it needs to be more sutble. That bright white looks like a big dot on the road.
Top

I can make it larger, it's not a problem. In my first attempt at this, I actually made it too bright, and that also looked very un-natural. I probably need to spread it out a bit more, and darken it just a tad more. There are no geometry reasons for it, it's using really simple Lua to do it.

In other news, I redid aGorm's palm tree / tropical-plant set, re-spec'd to 256 skins, and using a different mirroring / uvmap setup (his version uses a 512 texture1 and a 1024 texture2). All of the plants in these shots share the same skin. 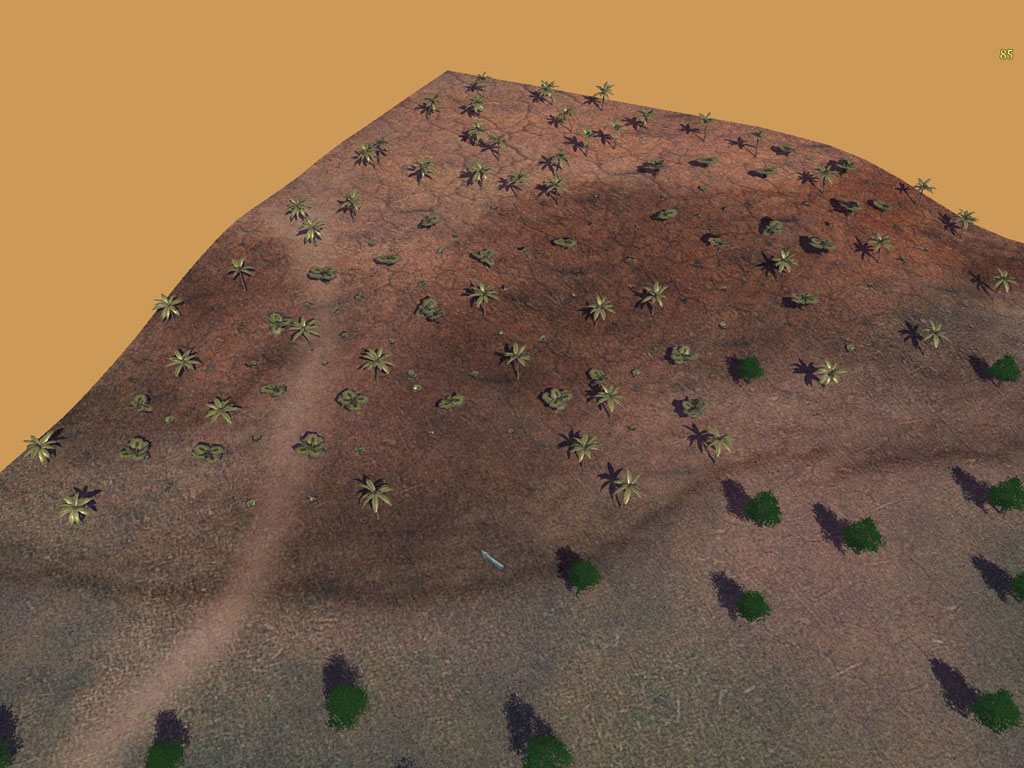 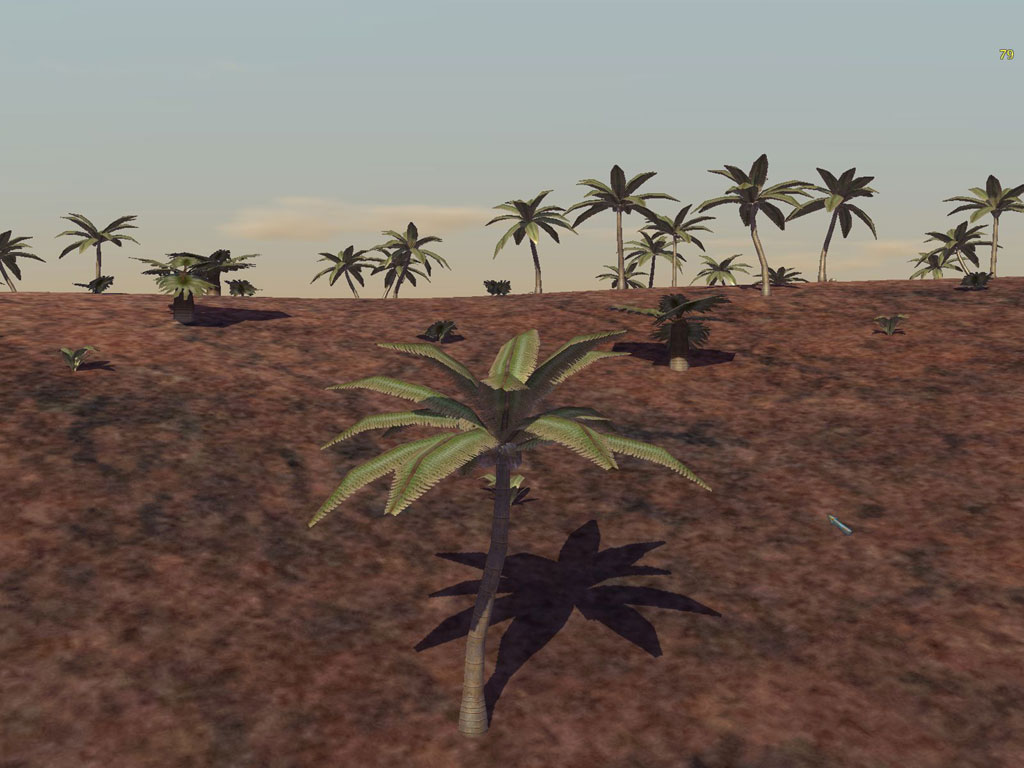 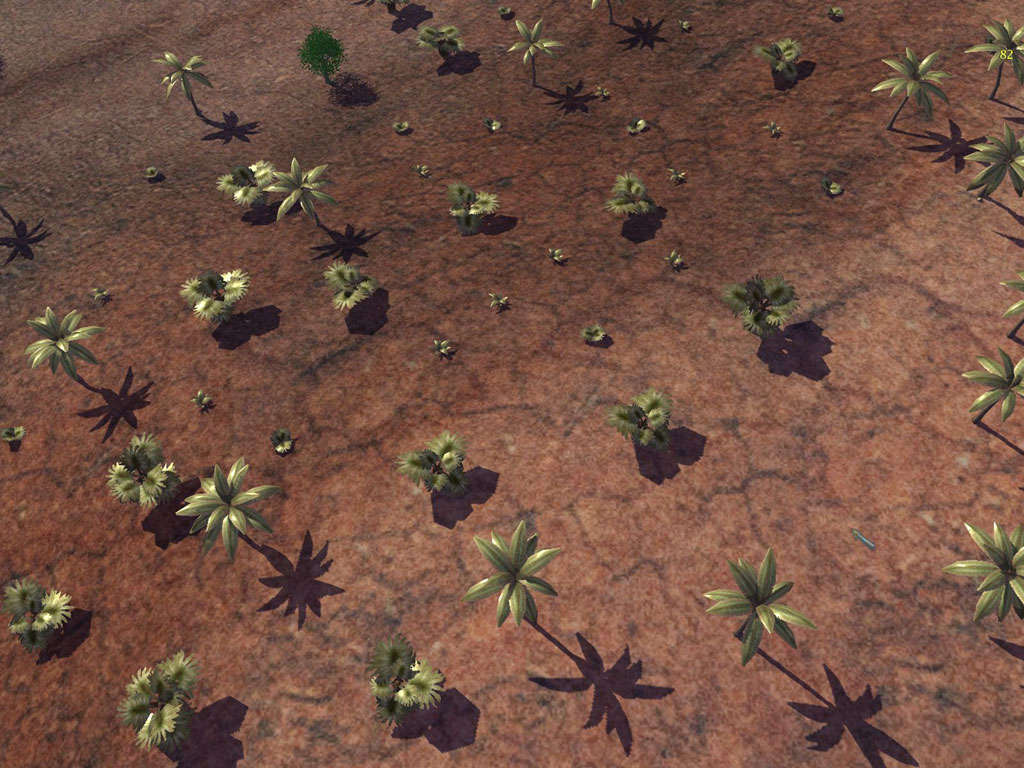 The change really sped up drawing, a lot more than I expected, tbh. I guess fill-rate is a pretty big dealio when you have that many triangles on-screen (that's maybe 20-25K there).
Top

Argh wrote:The change really sped up drawing, a lot more than I expected, tbh. I guess fill-rate is a pretty big dealio when you have that many triangles on-screen (that's maybe 20-25K there).

25k triangles for those trees? o_O I thought they were done with a handful of polies and alpha transparency?
Top
Locked
868 posts