I was bored, so I drew some random concepts for PURE:

The notes on the concepts should make it obvious what everything is. The second image is me tossing around ideas for the HR bomber. The third actually has nothing to do with PURE at all, really, but was included for completeness' sake. Besides, someone might benefit from seeing it, so I tossed it up.
Top

I really like that small drone with the rotors
Top

I'm waiting on Argh and Argh doesn't seem to be around at current. That's the situation at the moment I think.
Top

Guessmyname wrote:I'm waiting on Argh and Argh doesn't seem to be around at current. That's the situation at the moment I think.

Seems he has a lot of time to argue in that license thread...
Top

Ah. That would explain it (I haven't paid any attention to that thread whatsoever)
Top

It's for the best that you don't, GMN. There be dragons.
Top

...and the dragon, in this case, be busy with IRL stuff. The licensing thread stuff's actually about all I've had time for, and I haven't even had real time for anything else since Sunday.

To top things off, me car broke down yesterday, in a spectacular fashion

The heavy-inf is modeled, but I haven't been able to drag up enough time to skin it yet. The new cursor set is done, and the programming of the UI handler code is done, I think, so I'm on-track to release the last Beta sometime over the next week or thereabouts, if I can just get enough time free for the infantry to get put in the game. I'm glad I said beforehand that there would be a lull, it appears I'm prescient, rather than just lazy- I knew that last week and this week would be crazy, but I had no idea just how crazy it would be...
Top 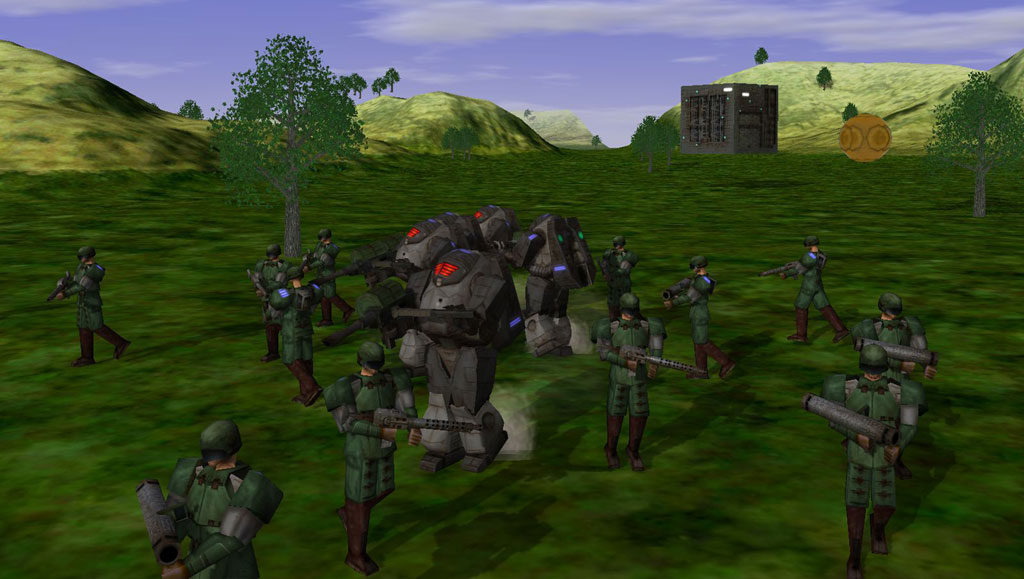 The Resistance Heavy Trooper. Initial model / concept by Guessmyname, with extensive modifications by me, paint by me.

The Heavy Trooper was always meant to be a dual-use unit- a heavily-armored soldier that could fly as its special power. Slow on the ground, it can zip around the battlefield, trading the ability to use a shield for the ability to be a cheap aircraft.

Model-wise, this was a fairly rough assignment. GMN's original model topped out just over 2050 tris- far too heavy, as these arrive in squads of 5. After extensive editing, it's down to 1089 tris- not bad for a RTS, although it must be said it's lost detail along the way.

Beta-testers... at long last, I finally have some free time again, so it's going to be high time to wrap this latest beta up and deliver it sometime this week. Please return the latest quiz, if you would like to continue to participate in the beta. Next beta series, if we can arrange a testing environment, will be MP tests, followed by (hopefully) some sort of early WIP tests of Satirik's new SP stuff (albeit this all subject to change, based on what happens when the programmers stop arguing and settle on a good, GPL-friendly solution, I guess that it's time to start writing some SP missions, as the rest of the game's nearly ready).
Top

Pure awsome, best unit to walk in P.U.R.E so far. Though Imo you could drop the red visor or whatever, and pretend it relies on sensors or something.
Top

The ammo box/barrel has reactive armour plating. Is that... wise?
Top

If this is a firearm, which is strongly implied by the design, then maybe it uses electrically-fired explosives to drive the bullets, so that they attain high enough velocities to punch through the armor of Shells. So maybe reactive armor won't cause any problems, so long as it doesn't damage the drum and ruin the feed.

That said, I mainly did it to add some greebling to the part. IRL, most drums are pretty plain and boring looking on the outside- the ends have some details, but the cylinders are usually very plain. I thought I'd just add some minor detail to it, but not make it really fancy.

And no, Rattle, it doesn't look much like a Raptor. It's a suit of powered armor that happens to fly, yeah, but if you're looking for references... we started with a concept painting by some dude online... which in turn strongly references the powered battle armors from Machinen Krieger. As it got interpreted by GMN, there were definite Terminator armor references, and I added the swiveling jet design, changed the length of the leg segments to make it feel a little "heavier", and did a number of other things to arrive at the final look.

I'm fairly pleased with the way that it feels- a person could conceivably be inside and have a reasonable range of motion, which most powered armor designs clearly could never allow, and the animations for the ground mode reflect the slow movement speed- it can't keep up with normal infantry, but has a lot of advantages over them.
Top

Okay, some things on further inspection...
1) The visor... why? I liked the understated eyes the original Komodo concept had. I can understand that you want to bring attention to the head, but there must be a better way of doing that. If nothing else, it would be a good place to put teamcolour
2) You could have told me it was meant to fly. I could have built that into the backpack. :/
3) I think it would have looked better with the arms, rather than the arms ending with the gun (or whatever it is you've made the left arm, I can't tell). The arms would carry the gun probably, there would be a lot more movement available to the pilot and it would look like it could be used for other things besides combat. Oh, and it would also imply that it could use other weapons too. It would make it feel more like a versatile, infantry suit than just a miniaturized mech.
4) The barrel wouldn't have looked 'plain' if you hadn't greebled it. Plain areas can look good too, you don't have to plate up every tiny space to make things look detailed. And explaining the plating on the barrel (which I assume spins) through technobabble because it's not immediately obvious why this would work is not a good idea, simply because it's not immediately obvious. If a player even notices the plating, and given how small these units are it's unlikely (another reason why you shouldn't really have bothered with the plating in the first place), they are not going to think "Oh look, reactive armour plating on a spinning and very important part of the weapon! I'm willing to bet there's a technobabbly reason for that that I shall immediately go and look up!", they're going to look at it and think "Reactive armour on a ammo barrel? Why?"
It doesn't matter if it isn't actually an ammo barrel. It looks like one, and that is what players will think it is. There's a reason ammo barrels look 'plain', it's so that nothing will catch or nick anything else and jam the thing. Plus, reactive armour only comes into play if the weapon is hit. If the gun takes a hit, it's pretty fucked anyway, reactive armour is not going to help (if anything, it might make it worse)

Also, it looks far more like a cross between a lascannon and an autogun than it does anything like the weapons the PURE Resistance side has normally. That's probably why rattle drew the comparison to a Raptor.

For the curious, this is the Komodo concept I modelled it off: I'm sorry that I haven't gotten back with you yet concerning the latest beta. TBH I'm having a lot of trouble finding time to do everything, however, I will force some time tonight to get it done

1) The visor... why? I liked the understated eyes the original Komodo concept had. I can understand that you want to bring attention to the head, but there must be a better way of doing that. If nothing else, it would be a good place to put teamcolour

Well... the basic idea was to have red sensor eyes (since that's a repeating theme on the Resistance stuff). Round ones looked awful- it made for a cartoony "cute" feel, so I tried slits and ended up with that. If they're too small, you just won't be able to see them at typical zoom, so bear that in mind- they have to be big enough to be visible, which means pretty big, given the size of these guys.


2) You could have told me it was meant to fly. I could have built that into the backpack. :/

Y'know what? I looked back at the post about concepts (we're talking sometime in December here, folks), and it appears I just dropped the entire description of the heavy infantry off of there- light infantry were described in some detail, but heavy weren't. My mistake.

I just assumed you'd forgotten, so I improvised a fix. Turns out I never delivered a real spec for it


3) I think it would have looked better with the arms, rather than the arms ending with the gun

I guess it's non-obvious from the render, but look at the in-game shot- they not only have arms, but they have hands, and the claws are animated when it shifts stances. The gun's handle moves along with the rest of it as it goes from walking to firing, and the wrists turn, the elbows turn, the shoulders turn in two axis, etc. It has more joints than anything else in the game, and can almost do a full range of human motion on the arms.


4) The barrel wouldn't have looked 'plain' if you hadn't greebled it. Plain areas can look good too, you don't have to plate up every tiny space to make things look detailed.

First off, it doesn't rotate, it's an ammo drum- it just holds ammo in a spiral pattern. The gun's chain feed would pull the ammo out of the drum to prepare the shot for firing.

I wanted the gun to feel like a big blocky thing, but keep the polycount down and avoid making it resemble anything from a major game, or a design like the one in the concept piece, which would just look like a weird stick at typical zoom, and be a waste of triangles.

Hard to pull off.

At one point, I had a pair of weapons, one for each hand, and they were cool but I was like, "wait, that's Blizzard's new flying marine", etc., etc.- the problem here is coming up with something that's different, but feels appropriate. After thinking about it a bit, I came up with this design, where the trooper grips the handle to help compensate for recoil and keep the weapon steady while firing. I'm open to making a change on that, if we can come up with something under 200 triangles that feels right and I can fit into the uvmap after removing the current gun.
Top

I like it, but I must say, I personally imagined it having no clearly defined 'head' area. I think it would look more interesting as a unit if the head area was not defined by a darker texture but was actually the same as the body, so that entire element reads as one.

Also, sorry to be nitpicky, but it's the first time I've seen your infantry - the proportions seem to be off (that's after factoring in the distorting effect of the armour)? Is it just me?
Top

It's a great model, one of the best in Spring. I'd love to see the original million tris version just to see what it should look like in an ideal supercomputer filled world...
Top
Locked
1274 posts