by knorke
yoyo i finally made a map that is decent enough to show, hooray.
Its a 8x8 2 player map: 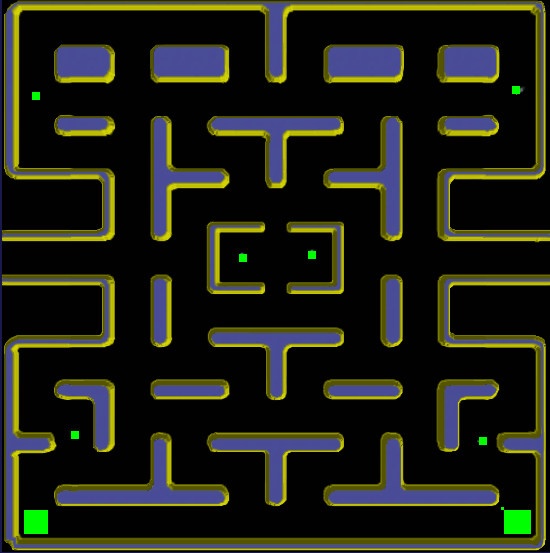 Before I publish, I would like to hear some critics.
ie ideas for geovent placement (big green=start positions)
will probally add at least one more vent at top middle over the T wall.

The kicker are the tunnels

Eatable dots not included :/
If someone has a good idea what the dots would be good for...?

He said system might be super-OP on this map but I am not so sure. ie Network's "Connection" unit can shot over the walls. Yes, System's pointer can do that but suck at everything else.

----edit---
Due to no recent advances, just consider this "final":
http://springfiles.com/spring/spring-maps/pacman-map

by Jazcash
Make uber portal to transfer units from one tunnel to the tunnel on the other side!

by Pxtl
Nothing in the cherry spot?

by Johannes
Maybe switch starts to be in diagonal corners? And give the corners without a start another geo. Would make the wraparound used more, and allow wider maneuvering otherwise too.

by knorke
is that between the 2 bottom T walls?
Thought maybe its cool to have the lower half somewhat free and expansions more in middle/top.

Johannes:
map is only vertically mirrored

so cant have diagonal startpos

by Gota
woo finally a kp map that doesn't burn your eyes.

by zwzsg
Nice, but it looks untextured.

I like the six geo position, don't change that.

And would someone please fix Spring pathfinder?

by knorke
Any ideas for texture?
Maybe something to mark the geovents spots.
It indeed does look a bit empty but with units on its nice imo and looks "clean." I agree some other KP maps are hard on the eyes.


Colorwar is blocked by walls? I remember it climbing it over everything the few times I tested it. Needs unpassable terrain for the walls?

by maackey
imo would be really awesome to have very low metal mex spots as the edible dots. Ofc if this is specifically for KP they'll not be very useful but can be played with other games.

I like the six geo position, don't change that.

And would someone please fix Spring pathfinder?

dude.
I have an idea.
Do you think you can add like faces to the units? i.e. each unit would have like eye in some form or eyes and mouth.
Either the model/texture itself or just a gadget that added them to every unit.
I think it has the potantial of looking very cool and make the units feel more personable.

Actually there are 2 more start positions at top. Too many start positions can be bad though, if players start at wrong positions because they did not pay attention to team numbers. Always find that quite annoying...Anything > 2v2 is always played with boxes anyway.

Something else, is it possible for maps to change the smoke of geovents? I think for this map it could be a bit brigher or remove it maybe? Then I could put some ceg effect around vents because I could not come up with a good texture to mark them.

by zwzsg
I like the gameplay, but the texture looks unfinished.

Would you make a version with fancier graphics?

I love the continuing map edges, but those walls as blockers are crucial!

by knorke
I really wanted to make a more fixed and prettier version but did not ultimately manage. Guess I am just not good with graphic editing or map making.
So since appearently the map got included in KP 4.2 (weeeeeeee!) I've uploaded to springfiles so lobbies can also get it:
http://springfiles.com/spring/spring-maps/pacman-map

Kernel_Panic#License:|FOSS, with only 2 FOSS maps]])<!-- Since you should be able to remove those, I wonÔÇÖt mark it as non-free. Other maps have non-free license or no license at all.)

this map is FOSS, anybody is allowed to modify it.
some notes if somebody really is bored enough to do so:
-please change name, so that there will be no sync problems.
-do not call it "pacman_version2" but rather "pacman_fork_by_yourname" or something.
-the teleport lua has a bug if portals are not on the same height level (fixed version is somewhere on forum)
All times are UTC+02:00
Page 1 of 1