The idea is to have prefab gaia units to plop down to build maps. Each prefab build is essentially a unit that behaves as a visual for the map, while they retain a terraform map once spawned in game. The terraform map is hidden under the model and acts as a projectile and move path barrier for units.

Anyways kaiser, car, and I were discussing how if these prefabs work they would allow for building of urban/ dungeon/ spacestation/ military complex/ etc type levels.

It was discussed that a possible alternative would be just have wall units set to neutral and use their hit box as a barricade, however the results show that units will target enemies through the hitbox and insist on shooting the walls when they aiming beyond. I beleave los also plays a role in the decision to go to terraforming under a unit instead of hitboxes.

Anyways here are some shots of robots shooting walls. And here are some demo files of hitbox walls: http://springrts.com/phpbb/download/fil ... ew&id=5887

| that you can actually find right here
\/

Q: how tall and thin could you make such a wall?

since teraforming leaves a "point" and smooths the point at which the wall meets the floor, sooner or later the wall would have to be thicker to avoid this.

Also how accurate is the teraform inside? are units going to be able to clip bullets through the top of the wall?
0 x
Top

the wall would have to be tall enough to avoid aiming issues, but the taller it gets the wider the base (maybe)? Maybe not...

I am not very familiar with the terraforming capabilities honestly but I imagine if you can raise a single point the the minimum thickness stays the same regardless of the height?

I experimented with Terraform-Walls a while ago, too. While it was needed for me to have a real terraform below the pseudo-unit (To allow units walking on top of them), couldn't you just set avoidFeature in the WeaponDefs?
0 x
Top

Good point. However features are not powerful enough to let us do fancy things like doors that open. Features cannot change their blocking, yardmap, or be animated.

There's also the option of avoidfriendly and the walls would be neutral (or rather, temporarily allied) gaia units, but I spoke with bobthedino and he doesn't like avoidfriendly on his weapons because he loves friendly fire.
0 x
Top

yeah avoidfriendly is for noobs :)

okay, so the other day we were talking about gauntlet style levels, using a "single character" to navigate the level and fight enemies, possibly levelling up and getting bonuses (although that bit is really secondary to getting something going, most important would be to get a nice dungeon working)

i was initially opposed to using terraform with a basic block based maze, but i've had my thinking cap on, and really i think it's a good idea.

my suggestion would be to use something like prims algorithm based mazes or the like (been reading stuff, herp derp) that generate dead ends, and then after the maze is created, possibly carve out some random "room" areas, and place monsters etc, piles of gold, switches that you shouldn't step on etc

- possible to generate a dungeon "on the fly" ? like... an end condition of "all player characters are within the exit square for 10 sec" which would then reset the maze into a new one with new stuff (creating an endless maze; grind until you die!)

- lava gadget to kill players after a set timer (dont linger in the level too long or you will anger the gorgonbeast!)

- could enemies be placed randomly as part of the level generation process?

- could there be preset "rooms" loaded from a datafile and incorporated into the maze? (i'm thinking preset arrays, for instance "smoths tomb" would be a 5x5 open space with a gundam shaped sarcophagus)

- should i stop asking needless questions and get cracking making some basic cube shaped wall and spiked pit sections and a textured flat spring map to match? in obj format? ok cool i'll just go ahead and do that

edit: ofc this was offtopic but related to what we were discussing yesterday; i didn't want to forget anything

Enemies can be random, and I think mazes can be done as they are explored, but the trick is finding a good algorithm/ code for making them. I totally agree on the prefab rooms where various types of rooms can be found, but most of the maze was to be prefab rooms and walls/ hallways (if thats possible).

I think it would be important to work on a working demo of the terraform presets/ walls (a small number) and then work on the random placement code/ algorithms.
0 x
Top 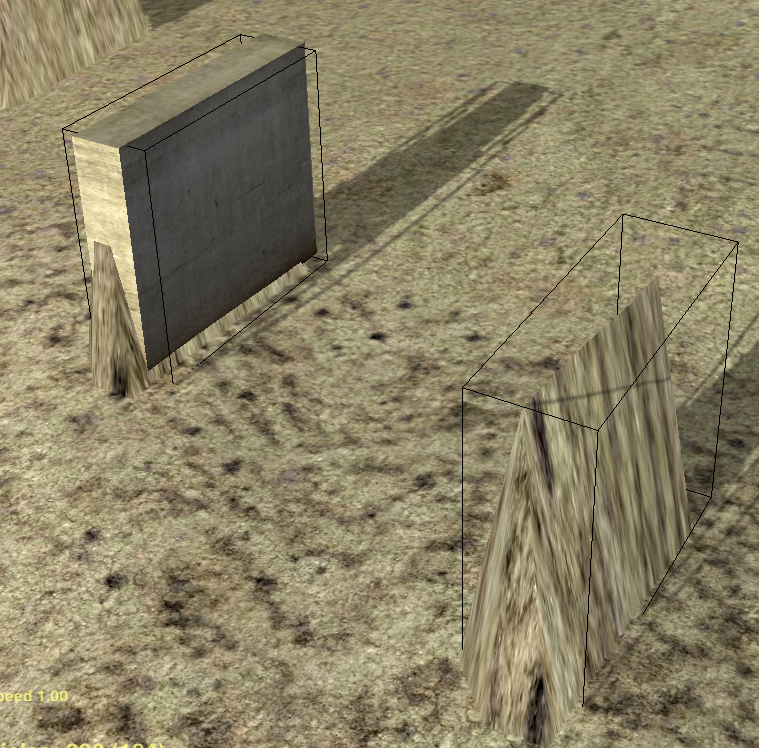 It appears that the terraform grid is not fine enough for such narrow walls, might look better with bigger models.
effects and projectiles are visible through the wall, units not.
When I tested, units tried to shot through the wall but I hope that was just because my test units had a high firing point. cba to copy everything over to another game.

unit script to terraform a rectangle under the unit when it spawns:
http://pastebin.com/B87GBpup
you can adjust
local width = 1
local length = 40
local height = 40

when the unit is destroyed, the ground is restored.

That is pretty awesome. I will test with larger models.
0 x
Top

Another issue, that just went through my brains, especially wrt random dungeons: The hightmap is always visible for all players, so there will be no real surprises or the need to explore the dungeon, when you can just click on the exit and let the pathfinder do the job.
0 x
Top

camo wrote:Another issue, that just went through my brains, especially wrt random dungeons: The hightmap is always visible for all players, so there will be no real surprises or the need to explore the dungeon, when you can just click on the exit and let the pathfinder do the job.

True. I was thinking of solutions to that. Maybe a gadget that draws blackness over unexplored areas of the map.

Another reason (which I can't believe didn't occur to me earlier) to use terraforming is that pure features or units don't block LoS! This is a dealbreaker if you have two parallel halls and can see through the wall to what's on the other side.
0 x
Top

i thought they would at least avoid terrain walls though. at least in my game i tested with, they did not. in zeroK it seems no problem though so problem just a mix of unit height or random tags. Or maybe the width of the walls, zeroK walls are /\ while this walls are |

KaiserJ, all that is technically possible.


- lava gadget to kill players after a set timer (dont linger in the level too long or you will anger the gorgonbeast!)

btw, could quite easy be modded that it does not flood the whole map but only certain rooms.


using a "single character" to navigate the level and fight enemies, possibly levelling up and getting bonuses

I dont think that would work good in spring, unless there is a competive multiplayer mode this would create the creation of thousands of items and whatnot etc to make it interessting. The step from techdemo to game would not work imo.
0 x
Top

I dont think that would work good in spring, unless there is a competive multiplayer mode this would create the creation of thousands of items and whatnot etc to make it interessting. The step from techdemo to game would not work imo.

but what if we DID something like this :3 still early days yet but we've discussed different upgrade systems / item systems / character and monster generation. it really depends on the system, if theres a combination of dungeons and dragons style experience with a short list of items (wc3 didn't have thousands did it? i thought hundreds or less) then this could very well work.

don't want to get too in-depth with the forethought on exactly how characters and gameplay could work, its best just to go in baby steps and get the maze working

If avoidfriendly were on the walls, there is a very real chance that if the maze was small enough, the unit would not fire at all.

Collidefriendly applies to the projectile.

I only mention it because not everyone realizes how it works.
0 x
Top wicked awesome! was this using prims? i'll be around tomorrow aft with some wall models ready btw

really great work though on the implementation
0 x
Top

hear strange noises, cant see shit and someone is missing?
split up and have a look!