Thanks @MaDDoX. Glad to hear, my work resonates.

Yeah as far as number of materials, the only limitations are:

(**) ALU - An arithmetic logic unit.
Also there exist two fundamentally different material blending principles.
(***) There might be a place for some tricks, to alleviate this limitation a little bit (like a prepass to see what materials are used by a specific tile), however this is not reliable nor trivial to do. The real solution is to adopt OpenGL bindless textures or go vulkan. Although I'm not even sure the amount of the bound textures will be a bottleneck.
Top

*** Every single trick ever used turned into a limitation later in game. The tile system is super performant, but does not allow for efficient texture overdraw. Kloot is busy removing the old trickery, lets not put new trickery on top of that.
Top

Small update from my side on terrain PBR.

The project is not dead (yet), despite I haven't been able to find volunteers for testing the concept.

Last couple of week or I so I spent on making the soft shadows. While the current shadows are a bit better than standard spring shadows, because of the amount of taps used in Percentage Closer Filtering, it still looked quite dumb in a way that shadow softness was never the function of distance between occluder and occludee, but was rather a static property. The soft shadow algorithm was supposed to take the aforementioned distance into account and soften edges of the shadows so that shadow has hard part (umbra) and soft part (penumbra).

To implement such shadows people mostly use variant of NVidia PCSS algorithm, so did I.
Unfortunately the implementation that worked well in other frameworks and tech demos, was stubbornly refusing to work as expected on spring soil, which led to huge amount of time spent to debug it and trying to make it work.

I'm not completely satisfied with visual result, even less satisfied with implementation (it has some value hackery I'm ashamed of inside).
Anyway, here we are. On the screenshot below there are two occludee units that cast shadows on the ground. One is up in the air, so shadow is more soft and a bit less pronounced, another one is on the ground, so shadow is hard and firm. Make sure to open up full-sized attachment to observe it better.

There is performance impact of enabling soft shadows, so I plan to introduce configuration presets and feedback mechanism to change the implementation and quality based on the average FPS. This, though, goes to my pie-in-the-sky list, as currently there is no demand for such functionality.

P.S. I'd like to sincerely thank Kloot, who was able to provide help, engine implementation and advises in timely and delicate manner.

ivand wrote: ↑08 Feb 2019, 01:03 I'm not completely satisfied with visual result, even less satisfied with implementation (it has some value hackery I'm ashamed of inside).

Don't be! It looks beautiful and you were working with limits. It's awesome that you found a way around those limits, no matter how hacky it is!
… that feels super cheesy since I'm not a spring dev but whatever :D Thanks!
Top

If one where to do a whole rts with this- would you recommend a atlas- or having all materials as texture per unit baed into those textures?
Top

PicassoCT wrote: ↑09 Mar 2019, 22:31 If one where to do a whole rts with this- would you recommend a atlas- or having all materials as texture per unit baed into those textures?

If you talk about models PBR, It's hard to argue against atlases as they reduce memory footprint and don't need to be swapped as rendering loop goes from one unit to another. Though the performance tax of working with per-unit textures should not be too noticable for modern GPUs.
Top 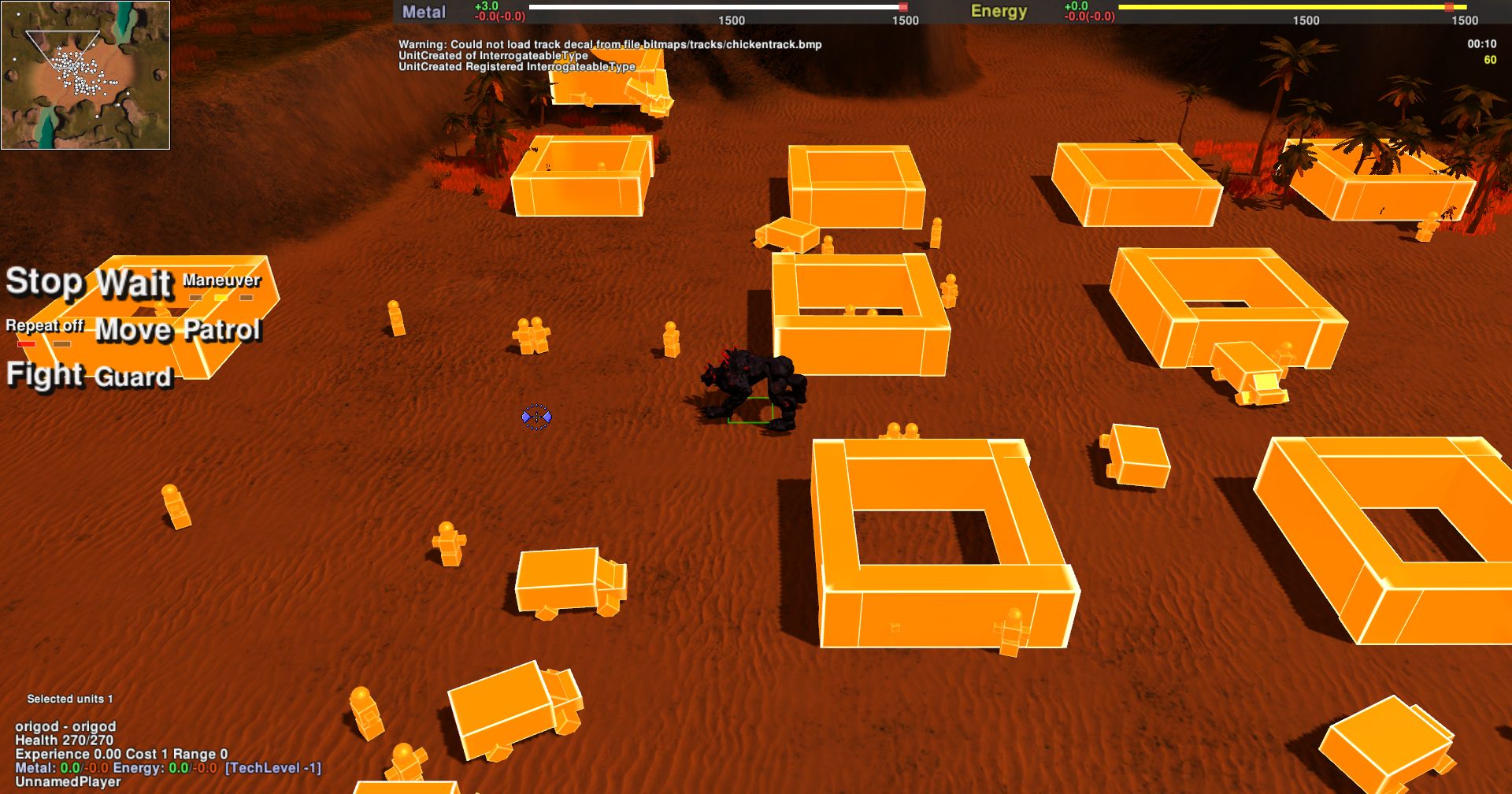 Now for some texturing of my own. It really looks awesome beyond compare..

only trouble is my day and nightshift.. how does one accomodate a dynamic suncolour into the shader?

Hi! Thanks for the interest!

If your request is about the sun color, then this https://github.com/lhog/spring-models-p ... ff9b31f58f should do the trick.
NB: I haven't tested this yet, if it doesn't work, please report back.
NB2: PBR doesn't operate with "ambient", "diffuse", "specular" terms of sun color as defined in spring, so for now I tied "diffuse" to be out sun color. Perhaps we should combine "diffuse" values with something else. Only testing on real maps can reveal how mappers set up sun colors.

Sun sky position should have been operational without any recent changes already.
Top

Many maps use a combination of baked & dynamic shadows (from a chosen sun dir) to create their terrain shadowing - consequently in most cases the game should not risk changing the sun pos.
Top

Thuse the hacks of the past, become the limitations of the future. What now? Take a negative light an do a prepass, to shadow all things equally?
Top

I'm not sure I know what the baked shadow in spring map context is.
Can someone enlighten me?

@PicassoCT does my code work?
Top

Shame on me for loosing the link to the blob. I thought i send myself a email with it.
Top

A baked shadow in the context of maps is a map with shadows drawn as part of the map texture. Here is an example: https://zero-k.info/Maps/Detail/9766
Top

Yeah I kinda guessed the meaning. What I really wanted to know was why do that in the first place?

Shadow mapping will be done for units and features anyway so it is not about performance.

Are standard spring shadows not good enough? Are some nuances of visuals not covered by standard shadows?
Top

Alot of people turned off standard shadows for potatoes reasons in the past.
Top

Spring shadows may not have existed at the time. There was definitely a time where shadows could not be used at the same time as LOS view.
Top

kloot wrote:"This engine needs a potatoe blight, something biblical, like the irish famine. Some event to once and for all up the standards, if necessary by lowering those unworthy into a ditch..."

After I pronounced my attempts to plant PBR on spring soil dead several months ago, I've actually come across a good way to estimate the environment irradiance from the reflection map.

The lack of sane radiance was the bane of my previous PBR implementations, because units looked vastly different on different maps/environments and it was impossible to find the good looking middle ground.

With the new technique to sample diffuse and specular environment maps, the PBR idea might have come back. The shader is currently implemented in BAR/BYAR and it strictly follows the reference PBR implementation that can be found here: https://www.shadertoy.com/view/3dy3zD

After the previous failures, I'm a bit hesitant to celebrate, but the first shots look good and sane.

One can compare these 4 extrema as depicted on the tank with reference "sphere" implementation https://www.shadertoy.com/view/3dy3zD

P.S. Some in-game shot (the metalness-roughness are not even specifically tuned for PBR, but rather inherited from older non-PBR implementation) on the dark map (dark environments used to be a big problem previously):

Sorry, if i annoy the crap out of you.. but i cant get this to work, and it would take me a month or two too figur out the innards of the pbr shader.

For my example unit i followed these recipes:
https://springrts.com/wiki/Shaders:IvandPBRShader

and kept my sourcecode as close as possible to
https://github.com/lhog/Zero-K/blob/pbr ... 10_pbr.lua

only modification is this line commented in api_custom_unit_shaders.lua

I generated a unit the "operativeasset" for testing purposes which should have it all..
these are its 3d object definitions
https://github.com/PicassoCT/MOSAIC/blo ... et.dae.lua

Two texturesets where created, none of them where accepted by the shader.
Even the fallback to the default shader is not working.

The infolog is not indicative of any error:

If anyone has tryied this framework/ has a working setup.. i would be really happy for some pointers. Thanks.