You could always help, Pepe. Constructive criticism is useful, but that is more destructive than constructive. People wonder why anyone who ever actively advertised, myself included (I even paid for banner placement online, and pamphlet printing offline), stopped? Probably the combination of no support and destructive criticism.

I'd rather have a dozen imperfect projects of passion than no project at all.

Keep it up Firestorm_, sounds like you're having fun!
0 x
Top

I full heartedly agree. Firestorms work isn't just an effort; it's a well done effort. Your negativity will get neither the work you're not doing, or anything else, any closer to success. What do you expect people to do when you say things like that Pepe?

If you don't have anything nice to say (or at least constructive as neddie said) then just don't say it, or in this case post it. It gets no one anywhere.
0 x
Top

It really depicts springs comunity as what it is.. and its well done. Also Firestorm has style.

Only problem is, that many advanced Programmers (especially the hard C ore) see them selves as quite a elite. So they would expect to be first, topmost on this "I want you for Spring" poster.

cleanrock wrote:If we can increase player base of spring games i think we would automatically get more devs of all kinds.

I tried showing Spring to some friends (some of which are computersciencepeoplepersons) but playing was too difficult, so developing was not even thought of.
(That is what I meant in first half of
http://springrts.com/phpbb/viewtopic.ph ... 20#p540145 )

---
On poster:
My previous post was ignored so I make new one with big picture. 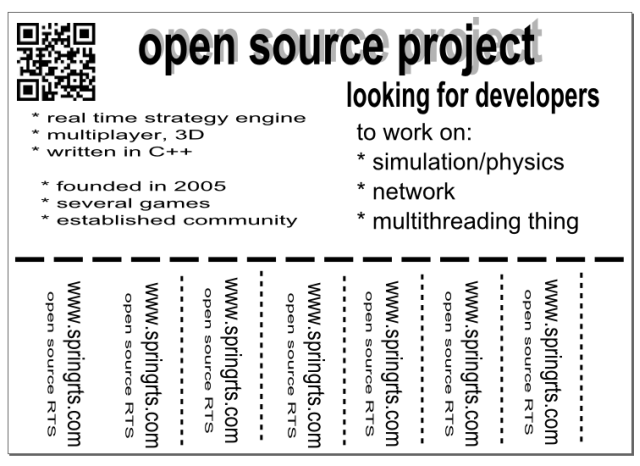 (the dotted lines is cut so you can take of one strip of paper with url so you dont forget. for iPad people there is QR code, its the in-thing to have.)
The text is basically made up, no idea what should be in "to work on:" list etc., its just about the style.
imo this "bland" style with some short bullet points is better for b/w print than graphic. (as said, graphic is good for web though)
Black boards are usually filled with tons of paper..the headline must be big, on first glance it must be obvious what the paper is about.
People will see it while walking past and maybe read 3 words, only if those are interessting they go back and take a second look.
0 x
Top

It might be a little ruff around the edges but nice idea. I would definitely look that QR up (on android) or at least rip a tag off. I'd like to think your style (besides obvious points) would be more geared towards engine, where as firestorms might get more game devs. Neither are a bad thing

and IMO one standard is a ridiculous thought anyway.
0 x
Top

Tim Blokdijk wrote:@FireStorm_
Cool, in an earlier discussion there was an idea to add a "Thesis?" page to the Spring site. I still think that would be a good idea, if that's added then maybe put that url on the poster?

Agreed. If there were such a page, which very well may be worth the effort, then of course I think an url should be added to the one I made.


PepeAmpere wrote:Omg is it only me who thinks current poster make poeple laugh instead of attracting them?

I think that is a hard question to answer, but I can tell you that of the people that I showed it yesterday, and saw looking at it, I didn't notice any of them laughing.


PepeAmpere wrote:If I, Pepe, make screenshot from ZERO-K or other game and make a poster from it, we have zillion times bigger chance for some success!

I have no problem distributing a few of these as well, and I plan to.
(does the QR work?)

You mean: Effort before you actually get to play is to much? Tricky and old subject if you ask me. I think that is up to game devs, who could make stand alone installers for instance. Are you saying don't advertise in ways that drop people on their plates before they are ready for them?
0 x
Top

The QR-code is nonsense, so please do not hang those up

(rest of text is more or less mockup too, was just show the idea)

difficulties:
yes the old usual stuff. But also things like this:
http://zero-k.info/Forum/Thread/4556
Not a good first impression if you can not exit the game.
The bug was fixed on the same day but if the person is already scared off that is too late.
Later on laptop the game could again not be exited, this time because it was so laggy: http://springrts.com/phpbb/viewtopic.php?f=65&t=30184 that it did not react to keyboard.
Bringing in more players seems like throwing puppies into a meatgrinder and hoping if you just throw in more, eventually one will survive.
I dont know what to do about that. Maybe that is just how it is?

Never advertising because it is not ready is not a solution but maybe honestly tell people what to expect. I found if you warn them that they will encounter strange bugs they will understand.
Of course a bit funny that you have to use sentences like "if it crashes we can adjust this setting. or this one. or this one..." or "we will just keep trying lobbies until one works."
Better to be honest and upfront

I think 1. and 2. are actually not that hard to fix, but takes initiative

I have seen the poster today "in real life", and I think it is a good advertisement! Lets hope more people will try spring and get involved.

One thing that I observed was that even if I was looking for it, it was not that easy to find it. There were many very bright/high contrast posters around that were catching the eye. Also, a couple of the graphics in the poster have quite a low resolution, which is more obvious in real life than it was on screen.
0 x
Top

Ingame lobby would be interesting, and some way of deactivating it with a button (who want to receive a notification of PM in middle of intense battle?)
0 x
Top

Cubex wrote:who want to receive a notification of PM in middle of intense battle?

Indecent proposition in middle of portal 2 jumping? No thanks

But yes, that was what I was refering to
0 x
Top

No matter how one puts it, it's always going to be a chicken/egg kind of problem.
You need devs to make a good product, but to attract those devs you need a good product

Neddie: No, read all my contributions, not only last.
Funkencool: No. (the same as Neddie)
FireStorm_: One image, one short sentence, not comic sans => print (the best way i you are newbie in this)
gajop: I disagree.
0 x
Top

Why not make the bug a feature? Since Minecraft public beta has no longer that bad ring to it.

"Wanna get into the gameindustry? Dont have those 4 years working experience they require? Why not join the spring beta, a OS-RTS Engine developed by a multinational team, that has allready spawned several games, and is still ramping up for future successes?

If the idea "a good engine should have" ever formed in your head, we either got it allready, or you are our (who)man. "

"Dont say anything to you? Try to enlist anyway, and we bring you up to speed, till code complete."
0 x
Top

Shared poster at highly active uni game design FB page. Will try to put some up at uni too.
0 x
Top

If it would be easy to do benchmarks with spring, the linux benchmark junkie at phoronix.com may help us attract more linux players at least :).
0 x
Top

malric wrote:I have seen the poster today "in real life", and I think it is a good advertisement! Lets hope more people will try spring and get involved.

One thing that I observed was that even if I was looking for it, it was not that easy to find it. There were many very bright/high contrast posters around that were catching the eye. Also, a couple of the graphics in the poster have quite a low resolution, which is more obvious in real life than it was on screen.

Can you take a picture of it and upload it so we can see and improve it?
I'm going to do that starting from the 6th of May so still have some time to prepare.
0 x
Top

gajop wrote:Can you take a picture of it and upload it so we can see and improve it? I'm going to do that starting from the 6th of May so still have some time to prepare.

Firestorm send me the source and I will also try to make a version.

@Firestorm_: would it be ok to upload your source to a wiki page related to advertisment? I feel we might loose track of material if everybody does a version but there are not centralized.
0 x
Top

@malric
Yes, no problem. I tried to upload it in an comment earlier, but that failed or took to long or something.

And I think a wiki page (or perhaps a sticky somewhere) for advertisement experiences and posters to be shared is a good idea.
0 x
Top
Post Reply
239 posts