Discuss your problems with the latest release of the engine here. Problems with games, maps or other utilities belong in their respective forums.

I am new user to this engine but a veteran software developer. I want to get help and bring attention to what might be some issues.
1) After install there was no shortcut on the desktop nor anything in the start menu.
2) Running spring.exe from program files didn't allow me to do anything, no games or maps available.
3) Following the tutorial at https://springrts.com/wiki/The_Complete ... pring_Game
I downloaded the basic example mod and a smallish map.
In C:\Users\me\Documents\My Games\Spring there is no games and no maps folder, so i created them and put the mainmod folder into games and put the file Small_Supreme_Battlefield_V2.sd7 in to the maps folder. I re-ran spring.exe and it didnt find the game or map.
I then noticed in C:\Program Files (x86)\Spring folder there was a games and maps folder, so i put mainmod and the map file in there and still no games or map showed up when i ran spring.exe
I ran springlobby.exe next and tried to start a game against a computer RAI, but i see no working Start Game button anywhere, how exactly do i start a game? Under the Singleplayer tab is a Start game button, but it says i must select a game first, but there are no games to select... Host will create a new game but its multiplayer only, which i dont want right now.

My goal is to follow the tutorials in order to start creating my own game.
viewtopic.php?t&t=25831
https://springrts.com/wiki/The_Complete ... pring_Game

Also, is the engine only 32bit?
Top

Possibility454 wrote: so i created them and put the mainmod folder into games and put the file Small_Supreme_Battlefield_V2.sd7 in to the maps folder

what is the "mainmod folder"?

in infolog.txt you can check where spring searches for games and maps. the normal way to "install" spring is, to download a lobby and then join a battle. the lobby will ask you for downloading the required files then. singleplayer content is WIP, still missions / a good way to launch them is missing.

when manual downloading you need to place the files in the correct folder else spring won't find them. so i assume either the files you use are broken or more likely you put them into the wrong folder.
Top

mainmod folder is from mainmod.zip from the basic example mod in the tutorial instructions at https://springrts.com/wiki/The_Complete ... pring_Game


This'll give you the engine and lobby, but no games or maps. It's probably best if you download the basic example mod and a smallish map, and put them in your /games and /maps folder respectively (for Windows, those'll be in C:\Users\YOURUSERNAME\My Documents\My Games\Spring ; for Linux, ~/.spring . You may have to create some folders.) Then load up SpringLobby and start a game against a computer RAI to make sure it's working fine.

I assumed i'd put the mainmod folder into the games folder.
Last edited by Silentwings on 28 Feb 2016, 23:43, edited 1 time in total.
Reason: quotation -> quoted
Top

The file from http://springfiles.com/downloadmain/4759 is mainmod.sdz, not mainmod.zip. Your browser may have "helpfully" renamed it to .zip without telling you. And you need to put that file, with its proper name (and without unzipping it - the instructions do not say anything about unzipping!) into spring/games. This is what the tutorial asks.

An alternative, which your quote doesn't mention, is that if you do want to have it there unzipped, call the folder containing the unzipped files mainmod.sdd, put that folder into spring/games. Then Spring will read it.

As a general rule, it'll be alot easier for people to help you if you attach infologs: https://springrts.com/wiki/Bugs#Logfile ... 2C_replays

The template games in that tutorial are rather old, more modern ones are https://springrts.com/wiki/Gamedev:SpringABC, although they don't contain example units.
Top

Hot diggity, that was it, lol
Stupid MS Edge browser renamed the file .zip, chrome downloaded it correctly though and now its working!

did you see the warning on the howto page? the example game / howto is >5 years old.


ATTENTION: Engine changes mean the games/examples
below DO NOT WORK 100% CORRECT ANYMORE:

this should be more up to date:
https://springrts.com/wiki/Gamedev:Main

Possibility454 wrote:Also, is the engine only 32bit?

no, 64 builds exists for linux and windows but win64 isn't actively promoted as lobby client don't support it and the 64 bit build is slightly slower.
Top

It might be quite simple to avoid this happening e.g. http://superuser.com/questions/482831/i ... hem-as-zip, but I don't really know if its the same problem.
Top

Possibility454 wrote:Hot diggity, that was it, lol
Stupid MS Edge browser renamed the file .zip, chrome downloaded it correctly though and now its working!

I had no idea browsers would rename files; this is good to know for the future in case someone else has similar issues. I would never have known to suggest this before...
Top

I'm not sure what the issue here is, is it that sdz gets picked up as an archive and end users open it up in their archiver and extract?
Top

the issue is, that internet explorer changes the file extension from .sdz to .zip because the server sends as mime type application/zip (which basicly is correct)
Top

This has been known for at least 10 years, if not longer. There have been significant pushes in the past to get everyone to use sd7, but for whatever reason various people refuse to use sd7 and then issues like these crop up as a result. It used to be a lot worse when IE was still the most used browser, however with chrome taking the #1 spot these issues subsided more or less. There isn't much that can be done about it at this point, other than asking people to use sd7 whenever possible.

You will see this more and more as people using edge crop up. Thankfully those people will still be a relatively small subset of the whole, but it is silly to perpetuate potential issues when a very simple solution (7zip) exists which mitigates the issue entirely.

tl;dr: Please use sd7 whenever you can to avoid noobtraps.
Top

I consider my self a pretty big computer geek, but have never heard of an sdz file before. I do use 7zip and .7z files all the time though. I would recommend just having the file be a .zip or .7z instead of .sdz if it doesn't really make any difference.
Top

Possibility454 wrote:I consider my self a pretty big computer geek, but have never heard of an sdz file before. I do use 7zip and .7z files all the time though. I would recommend just having the file be a .zip or .7z instead of .sdz if it doesn't really make any difference.

sdz are zipped and sd7 are 7zipped. The reason we don't use standard file extensions is so people wouldn't be unzipping them directly (it might confuse people into trying to install games by unzipping them, when they should instead copy them to the datadir folders in the original zipped format)
Top

it doesn't really make any difference

As someone who just unzipped a zip file while following instructions that did not say to unzip it, you've admirably demonstrated the value of sdz/sd7 extensions

If doing so results in M$ altering file types without telling the user, I feel licensed to send a less honest MIME type.
Top

Just use 7z = sd7 instead and avoid the trouble from the outset? Why go to the bother of trying to trick IE wrt zip mime types?
Top

Aside from the issue of existing sdzs, 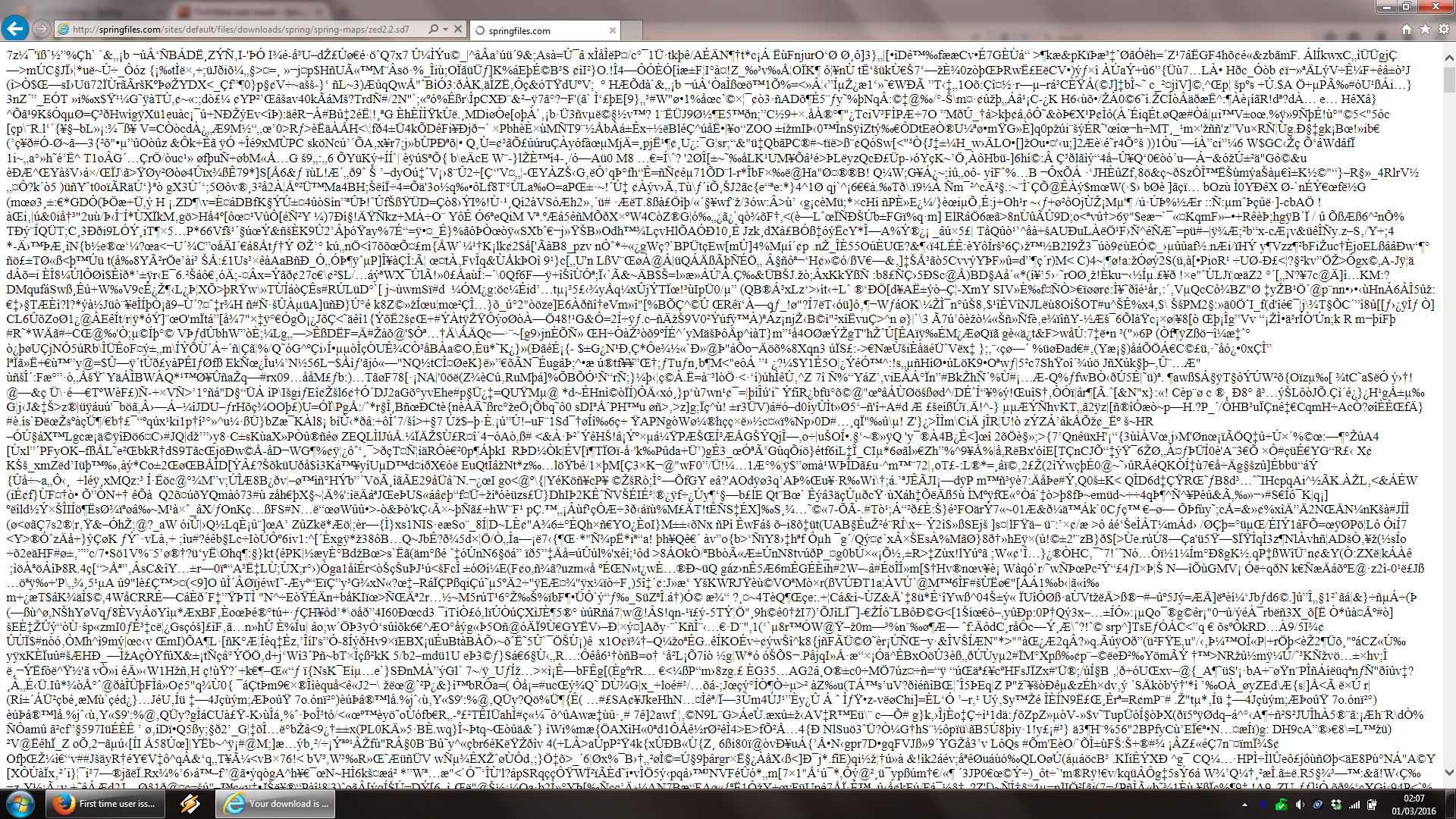 a little better but still far from perfect.

Forboding Angel wrote: You will see this more and more as people using edge crop up. Thankfully those people will still be a relatively small subset of the whole, but it is silly to perpetuate potential issues when a very simple solution (7zip) exists which mitigates the issue entirely.

Most people will still have the lobby autodl it for them.

We used sd7 in xta before, but now we use sdz because rapid serves that type. I don't know if related, but we had many more sync issues with sd7 than sdz. Not that the game would desync, but that the lobby telling people that "your version of the game differs" or something like this.
Top

Internet Explorer renames .sdz files and opens .sd7 files as raw text = both is fail.
It makes no difference whether new files are sdz or sd7 because there already exist hundreds of game & map archives in both formats.
The system that automatically generates archives from SVN/github produces sdz, so sdz is unlikely to go away unless that is changed. (The old rapid-upload-webpage also only accepted sdz iirc.)
Packing all existing archives to a different/new format seems unlikely to happen, it would have to be done across several mirrors, too.
Luckily for players all this mostly does not matter, because players can use lobby clients that download all files. (unless something goes wrong.)
For potential developers it can be an annoyance but I think they should be able to figure out how to download files, even if it is bit obscure problem and a "doh!" moment. Beside small note in tutorials I do not see what else could be done.


My goal is to follow the tutorials in order to start creating my own game.

Despite the name https://springrts.com/wiki/The_Complete ... pring_Game it is not a good page for that, even if one ignores all the dead links and outdated files on there. Years ago it was an attempt to have everything in one page but as result there is lots of stuff that is/was already documented elsewhere.
The author meant good but someone should have told him that with that structure is a dead end because it would almost never get updated.

The 3D modeling/UVmapping/texturing part is the only part that is still somewhat valid and useful.
Everything else is documented elsewhere in better form.
For example "Structure of a Game" is a worse version of https://springrts.com/wiki/Gamedev:Structure
Unitscripts have their own pages, and so on.
I do not understand the reasons why that page is still kept around.

Instead pick whatever topic interests you and look up info on that.


1) After install there was no shortcut on the desktop nor anything in the start menu.

Which installer excactly?
I mostly use zip archive and auto-update, but I think the normal installer is supposed to create some shortcuts?
Top
Post Reply
18 posts • Page 1 of 1