Visually it's quite close, just it's neither fun nor awesome.
0 x
Top

I could have understood the need to make a new project, i could have forgiven the fact that PA is being left in a corner right now ,as everyone needs money to survive

But fucking emailing me asking me to pledge money on another project while im eagerly waiting for features to be implemented in PA is just downward cheap and makes me mad.

They even TEASE the backers with features like factions and terrain destructability.

"this is the way we want RTS games to be funded"

"With Planetary Annihilation, we think the results speak for themselves. The game is a beloved and critically lauded entry in the RTS canon, and we’re extremely proud of it. Now we’re ready to try something even more ambitious. "

Im going to step asside now otherwise my inner rage is going to take me over to the PA forums, something i want to avoid.
0 x
Top

They build you lot up with hype, all the crazy features they promised were just a bunch of hype. Arguably they HAVE delivered on their promises but crazy promises do not make a good game.
0 x
Top

There's a lesson to be learned about their process.
0 x
Top

i agree as well

eh. I got the email too. Well I dunno, I guess this is a way of doing it too, as opposed to riding the DLC horse to death.

Still feel like the game is weirdly unbalanced (cardboard units, turretspam, eco feels weightless (the adv e building builds in like no time so teching is not a big project) ) and the globe maps coupled with random maps made all the games I played disorienting and, worse, very same-y. They all comet catcher on a bigger scale and while we love comet catcher, there is something to be said for maps having chokepoints and boundaries.

So all in all, a nice gimmick and we can finally silence people who want fucking spherical maps with an answer.
0 x
Top

Do Nuts did it so donuts, dont do it, unless doing it does the doubting Daring Devils a Ding.
0 x
Top

I see nothing out of all this that isn't standard company procedure. They are a games developer, and have all these resources left over from Planetary Annihilation's development that need to be reallocated. It's not like Westwood didn't churn out a game every year.

That said, I will pass from backing their new project, and determine my interest in it from seeing the final product. I was already incredibly skeptical about forking over money to the mere promise of a game and of crowdfunding in general—and an updated Total Annihilation is something I most wanted—and it's something I don't want to do again.
Last edited by AC-mister on 12 Oct 2014, 17:13, edited 1 time in total.
0 x
Top

Oh yeah its fine for them to develop a new game, just not like this, besides the rage was so much that they had to rush out offline play for PA.

Things that drive me mad:


With Planetary Annihilation, we think the results speak for themselves. The game is a beloved and critically lauded entry in the RTS canon, and we’re extremely proud of it. Now we’re ready to try something even more ambitious.

Everyone got new cars, what more can you want..
0 x
Top 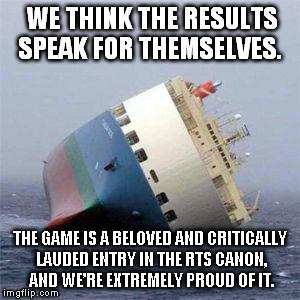 Not really my nature but I couldn't resist after they actually advertised to get money for a new project with phrases like this. Imho "We made a playable RTS game with a cute gimmick that some liked and some hated" would be honest.
0 x
Top

Not really my nature but I couldn't resist after they actually advertised to get money for a new project with phrases like this. Imho "We made a playable RTS game with a cute gimmick that some liked and some hated" would be honest.

I believe this is the general sentiment with the PA-players... :)
0 x
Top

I think as smoth said, its a lot of hype, and people bought that hype. And the game sucked.

Which leaves a uggly conclusion:

People as gamedesigners suck. Can Kickstart all you want. Can buy all the shiny effects.
But in the end, when you by power of money alone, become a asstronaut, you still suck at it.
0 x
Top

For me this is one of the nails in the shared coffin of kickstarters and early access, but this is a discussion for another thread/topic. ( I will make an exception for Killing Floor 2. I cannot wait! But that is about it.. )
0 x
Top

I don't think kickstarters suck, I think people should be realistic but most people out there are largely ignorant about the failure rate of games and are not programers so they have no idea how easy it is to bullshit with pretty screenshots and not actually have any meat to the code. When I saw PA first I thought, oh look alpha level graphics ok... wait this is an FMV, this is their concept art. then they zoomed out to do the whole moon drop thing and I realized that the rts would be less focused on units and more the entire planetary warfare thing. like a sort of 2> game(get it, like a half assed 4x).

Anyway they displayed all these features which, to me would in no way result in a real game and given my experiences with strategy games on the cellphone this reeked of the over-simplified gameplay those pieces of shits offered. The biggest way to piss off any consumer is to hype them up, generate an assload of sales and then produce what you hyped, then say, but it is what I showed you. Yeah, right, you built up massive expectations of an actual game, while it has what you showed, it is a cumbersome piece of shit. It is a bait and switch.

I had a project where my task was to wow the customer with fully functional visuals while the internals were shit and the project largely didn't work. At the time as a coder, I thought, well, I am buying my senior guys some time to get the internals working. We had several people leave the project mid stream and only a handful of really dedicated assets working on it. Ultimately the project went over budget and straight into a death march. As I was the single most junior developer, I was only able to really handle the front end and the back end was a wreck. My part was great and as far as the client could see, we had a functional site. However, it did nothing they wanted. Worse part is the PM was planning on leaving the company and state so he gave zero shits about the project or any of his team, he didn't tell anyone until right before he left. When he left right before the project ended, everyone was bitter, most of the team left the company and the client was unhappy. The major lesson I took away from that is that if the internals are not working and all you have is a pretty shell, you are doing cut and run.

Don't buy into the pretty and sparkly things people, want to back a project, always back a team with something to show. So far, the teams with something to show, have always delivered. Teams with just a concept video and a lot of big crazy promises never do. This project was doomed from the start, I am disappointed that I was vindicated. I backed their new project but fully expect it to fail if it even reaches full backing because again, all they have is a fucking concept video.
0 x
Top

AirMech Miniatures (Canceled)
-- expected to not even reach full funding, supported all the same

Spells of Doom: The Boardgame
-- expect to receive

Bring Reading Rainbow Back for Every Child, Everywhere!
-- asked for nothing in return, pay it forward

A fantasy-art style bestiary of lethal bacteria and the antibiotics that fight them.
The Bacterionomicon
-- expect to receive

Parrots of the World Playing Cards
-- got it

StarCrawlers
-- in development, had something to show, so far pretty happy

Arcadia Quest
-- got it

Japanese: The Game, a language-learning card game.
-- got it

Project Nimbus
-- in development, had something to show, so far pretty happy

KUNG FURY
-- in development
-- don't expect to succeed but what the hell, I hope it does.

Hand of Fate, a card game that comes to life
-- in development, had something to show, so far pretty happy

Project Sen
-- project did not reach funding, sucks but people don't like fat chicks I suspect.

Divinity: Original Sin
-- in development, had something to show, not my type of game but I liked their idea so I backed them

Wildman: An "Evolutionary" Action RPG (Canceled)
-- expected to not even reach full funding
-- probably would have failed all the same
-- why the hell not

wanted to see where they were going to go with it.


Distance - A Next Generation Arcade Racer
-- in development, had something to show, so far extremely happy

Dysis is a real time strategy/first person shooter hybrid.
-- I wanted the animation tool for spring.
-- in "development," had something to show, so far dead.
-- single man team, never again.