It has been brought to my attention that this game might be using the Spring engine. There are some graphical similarities, but I feel that it mostly comes from it using similar (and perhaps some of the same) assets that are found in other TA-like games.

I've tried it a bit with wine, (there's a demo available on itchio https://total-warfare.itch.io/mars ), and it really doesn't feel like Spring. None of the usual Spring commands seem to work. It starts with a 5.9MB download, that streams in various resources during runtime and apparently supports OpenGL 4.5. Those are pretty big features Spring doesn't have, so I find it pretty unlikely that a developer would implement that while not using some existing Spring feature like shadow support and a better camera.

However, I was then surprised to see http://total-warfare.com/cont/ , and I feel they might be misunderstanding licenses if they're using it like http://total-warfare.com/cont/INFO.txt . So, I've opened a discussion with the developer here: https://steamcommunity.com/app/671690/d ... 622576606/ , but they seem unwilling to share how they're using Spring stuff. My guess is they might be using some art resources, but not much more than that.

Does anyone have additional insight to offer?
Top

I'd recognize this anywhere.
Top

there is no underlying "engine"

Bullcrap, this is either a clean-room reimplementation of a Spring-like engine or some older fork trying very hard to hide its origins. Disassembling the binary (which has been stripped clean by the way) and comparing code sections against various spring{-mt}.exe versions will reveal which.


None of the usual Spring commands seem to work

It would be easy to disable or completely remove them. The archive also doesn't ship a widgets.lua (or gadgets.lua for that matter) so you're looking at a no-Lua default UI with hardcoded customizations, and the videos suggest custom formations was lifted into the engine.


... streams in various resources during runtime and apparently supports OpenGL 4.5. Those are pretty big features Spring doesn't have, so I find it pretty unlikely that a developer would implement that while not using some existing Spring feature like shadow support and a better camera.

The developer might not care about shadows particularly, just performance. Runtime streaming of resources using Spring's own networking protocol (at least the data transfer part) also isn't that difficult, and while supporting GL4.5 alongside GL1.x would be a major rework the complexity is much lower without a Lua API to consider. Can you test if adding a widget and/or gadget handler has any effect?

You can wget -r this directory, add a modinfo.lua like this, and load it straight up (after editing resources.lua to deal with a few missing textures) to see how the game plays in Spring.


All of this has very strong shades of zerver, especially his evasiveness and the multitude of whois similarities between https://whois.domaintools.com/total-warfare.com and a certain previous (still queryable) domain registered by him.
Top

It seems to crash if I do /give all so I played around a bit and got a few units that didn't crash it. Here's how it looks with those units enabled (map is from my local disk): 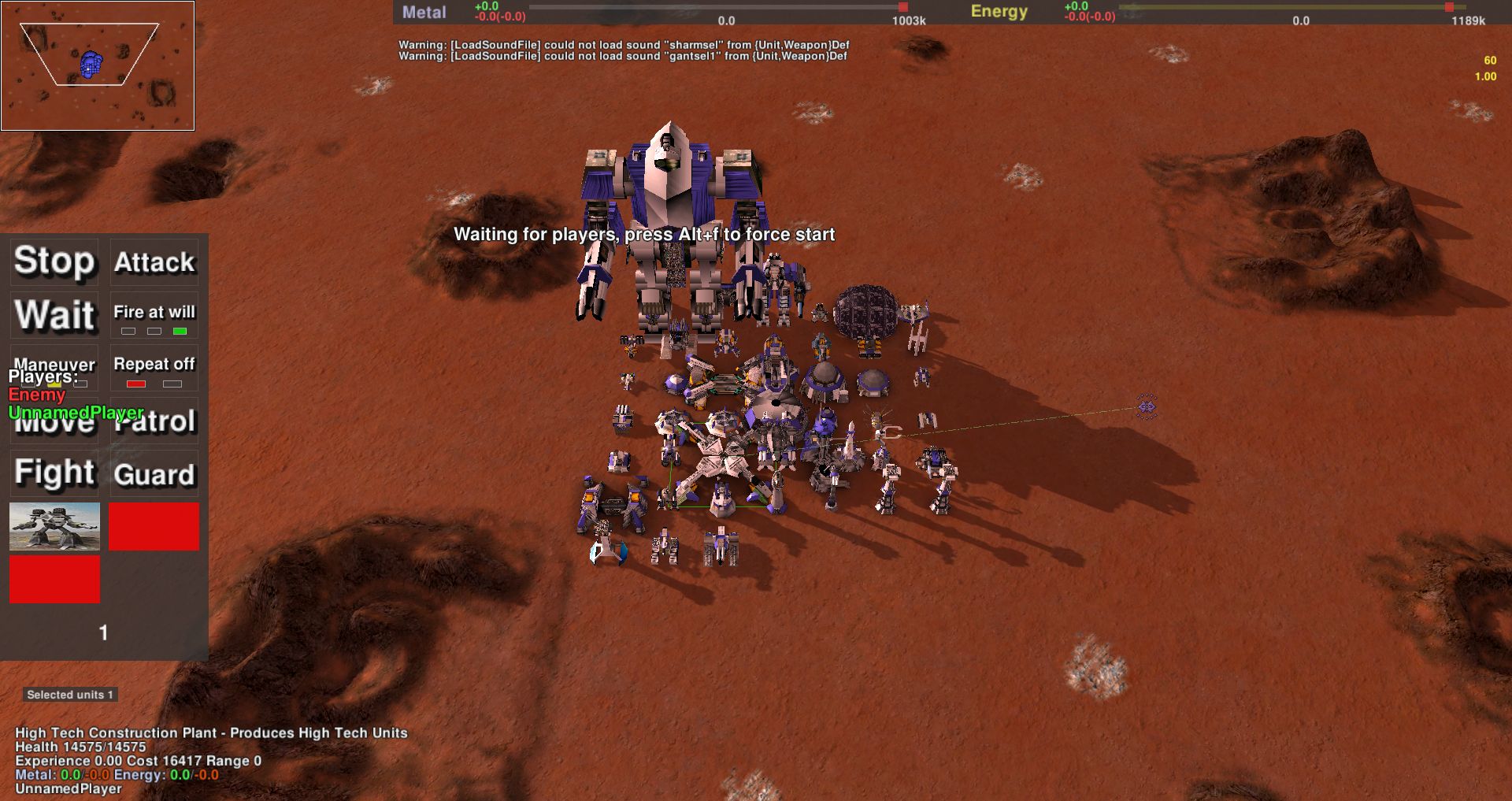 No problems with animations, they walk around fine. They even seem to fire their weapons, and some particles seem to be working, although I removed a lot in resources.lua.

So at the very least it seems resource compatible with Spring for the most part...
Can't say what engine is made with though

It seems to be trying to sell itself as scalable to huge numbers of units and possibly players in each battle with people joining mid-game (not sure if any of it is actually true).

It seems like it's using a modified version of techA units. Despite its flaws in movement animations and such, even UI (seem worse than what we currently have on the spring server), it has positive reviews on steam.

Maybe our current lack of players is due to insufficient advertising after all...hmm....
Top

The us the Gnirps:Engine - to quite a effect. Return of the sys?

Time to use https://steamcommunity.com/dmca/create ?
Top

Allow them to dev some more, before taking them down and flensing the corpus with GPL harpoons?
Top

Maybe our current lack of players is due to insufficient advertising after all...hmm....

To an extent yes, but nothing about this game's debut is really supporting that conclusion. Compare:

It manages to fare better than Evo though. But this is also the peak of its height for MTW, and Evo has had that so many years ago.

If you look at the reasons behind these differences (by reading the reviews), the most common factor here seems to be simply polish. MTW is a very Spring game in the sense that its game parts seem to be done with utter disregard for UX.
Top

raaar wrote: ↑13 Jan 2019, 21:10 It seems to be trying to sell itself as scalable to huge numbers of units and possibly players in each battle with people joining mid-game (not sure if any of it is actually true).

The midgame join works. I tried it out and my test game attracted another player. Here are some new pieces of information.

marsDgunWater.jpg
(1017.64 KiB) Not downloaded yet

Someone on steam suggests that the author of MARS is the author of the TLL mod of TA (which I have not heard of). This seems right, as most of their units have the 'tll' prefix. Also, all the scripts are BOS.

The age of its ZK gadgets provides some insight as to which version of Spring MARS may be based on. MARS also contains some gadgets from 2013 and 2014, such as lups_projectile lights (by KR in ZK) as well as unit_stun_energy_storage and unit_stun_control (by Nixtux, I assume from techA). It appears to run on an engine that spawns start units (nowdays lua is responsible for spawning start units).

It is a very weird project in that a lot of work has been put into it post-Spring.

Regarding licenses, the big issue appears to be violations of the GPL and possibly use of TA IP. Many of the sounds in ZK are some form of CC, not PD, which they seem to have ignored.
Top

still somebody working this dedicated to spring should be kept in the fold and deserves some respect.
Terrorizing every person who endavours to more with spring is unworthy of this great engine. This guy could be a potential dev.
Its just interesting he/she does not communicate with spring at all.
Top

Unlikely, The Lost Legacy is one of TA's best mods, if the author made a Spring mod, it shall looks better than this.
Top

Someone asked on TA Universe for the author?
Top

So - this is Manoas project? Pretty cool.
Top

A bit less cool that it is non-free, was made through stealing free projects & ignoring their licenses, which seems deliberate, and then lies about it when asked in https://steamcommunity.com/app/671690/d ... 622576606/
Top

I preafer stilling carrs in GTA 4, and you know how strong thisis ? and with 32 giga you can stilling 4 carrs in the same time ?
Top

Had I the heavens' embroidered cloths, Enwrought with golden and silver light, The blue and the dim and the dark cloths Of night and light and the half light, I would spread the cloths under your feet: But I, being poor, have only my dreams; I have spread my dreams under your feet; Tread softly because you tread on my dreams ...
Top

I only see 1 thing to do: http://gpl-violations.org/faq/violation-faq/
And hope he releases the sources.
Top

Did anything come of the talk of violation flagging? I think the engine devs have the strongest case since http://total-warfare.com/cont/ likely includes everything from a spring game.
Top
Post Reply
41 posts