hello there, is there anything really good for a slow style computer?

any options I can tweak to make this actually playable?? because right now it runs REALLY slowly (like 5 FPS)
0 x
Top

set all settings to min. Ur processor is fine, but try getting more ram and vid card if possible.
0 x
Top

2Ghz could be too slow if its a cheap one like AMD Sempron, so what kind of cpu do u have? In most cases CPU is the bottleneck in spring.
0 x
Top

Disable unit rendering and play using the minimap only. To see what i mean, search youtube for "xtaboi" and look at his dotwars vids.
0 x
Top

caldera wrote:2Ghz could be too slow if its a cheap one like AMD Sempron, so what kind of cpu do u have? In most cases CPU is the bottleneck in spring. 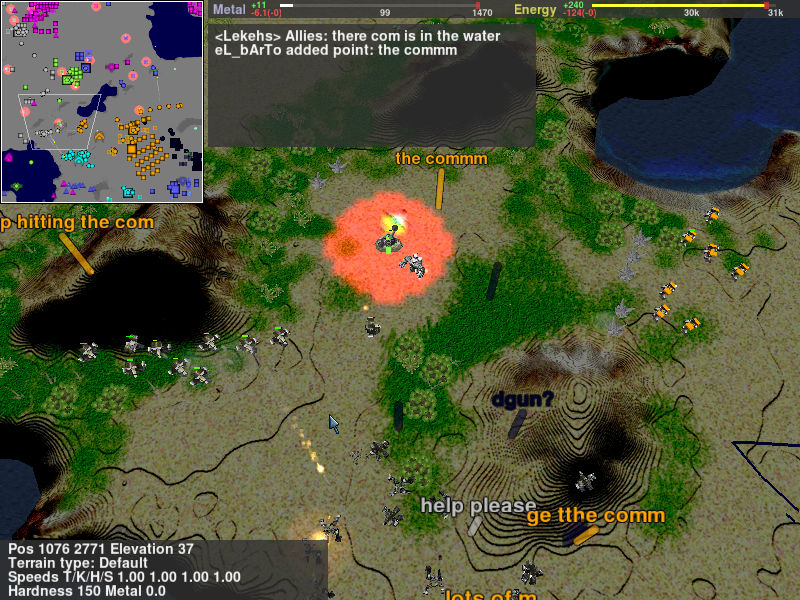 i think with settings like this, you should be able to play. also xta is maybe the best mod for low-end systems (although on good systems it looks very nice) because there usually are fewer units.
0 x
Top

wtf get a new pc newb

Well I tend to agree. Wtf are you trying to run modern 3d games on THAT?!?

It boggles the mind.
0 x
Top

It doesn't hurt anything to try.

kburts, if you don't mind speccing/playing with mostly only icons, you can type /disticon 1 in the console. That should speed things up a bit.
0 x
Top

I had a puter with PIV2GHz, 1024MB RAM later upgraded to 1.5GB and a 64MB card with GPU at 225MHz, made by ATI. Up to and until a month or so ago. It has been scrapped now and the parts traded. And currently I thus have just a 4 year old system, instead of the 8 year old one. I'm most happy with the nvidia card that the new system has, now spring runs w/o glitches on linooks, the way it should be (no more effy dual boots). With the old system I had played for years, no problem whatsoever, UNTIL MOD DEVS STARTED TO MAEK BLOATWARS. No really. It has been possible to observe a slow but steady reduction in preformance over the years in the mods and also spring itself (from time to time). An old programmer once said about realtime computing: "test on the slowest hardware you have access to"... TRWTF is why the central lobby system doesn't support multiple versions of spring, and also client-side installations of multiple spring versions could be better facilitated (I like to watch replays from older times). It's a PITA the way it is *supposed* to work now.

Thereas, a system like that will indeed be able to compute, but indeed with reduced graphics settings, increase in system RAM and perhaps with running tad older versions of spring and your favourite mods.

One day I was looking at the battle list, wondering why nobody plays on Mars, SmallDiv or Islands_in_War any more...
0 x
Top