very nice work Gnome, the only tweak i can think of is walking script speed for kbots (they tend to skate, but its really a non-issue...who's going to be watching kbots walk in a fight?)

The only other issue identified is that some weapons have issues targetting, as they are firing from a lowered point, at another lowered point. Not a huge problem, but one that needs to be attended too if this becomes popular.

But yeah, it looks insanely better. Terrain is much larger, you actually feel like you are battling amongst mountains and valleys and seas, not hills and dents and ponds.

Trees make so much more sense, and become a part of the gameplay, rather than big obstructions. Especially with SWTA. Have a look at some screenshots I uploaded:

... I don't like the idea of it being "toggleable", because it introduces far too many variables into the mix. Map makers don't know what size to build for (it makes a difference), as well as a host of other issues.
It is my contention that the reduced size is better than the original size.
0 x
Top

those second and third screenshots are...stunning. I love it ^^

I agree, this should absolutely be the default size.

Has anyone managed to get a TinySpring multiplayer game going...it would be good to see how it affected gameplay in a real game, instead of theory.
0 x
Top

Can you get a shot of the krogoth in a before and after pose on the same map? that would really give people a sense of scale.

Maybe the commander and kroggy standing together (smiling

) to show the differences.

How do you make gigantic things gigantic? Make everything else around them smaller!
0 x
Top 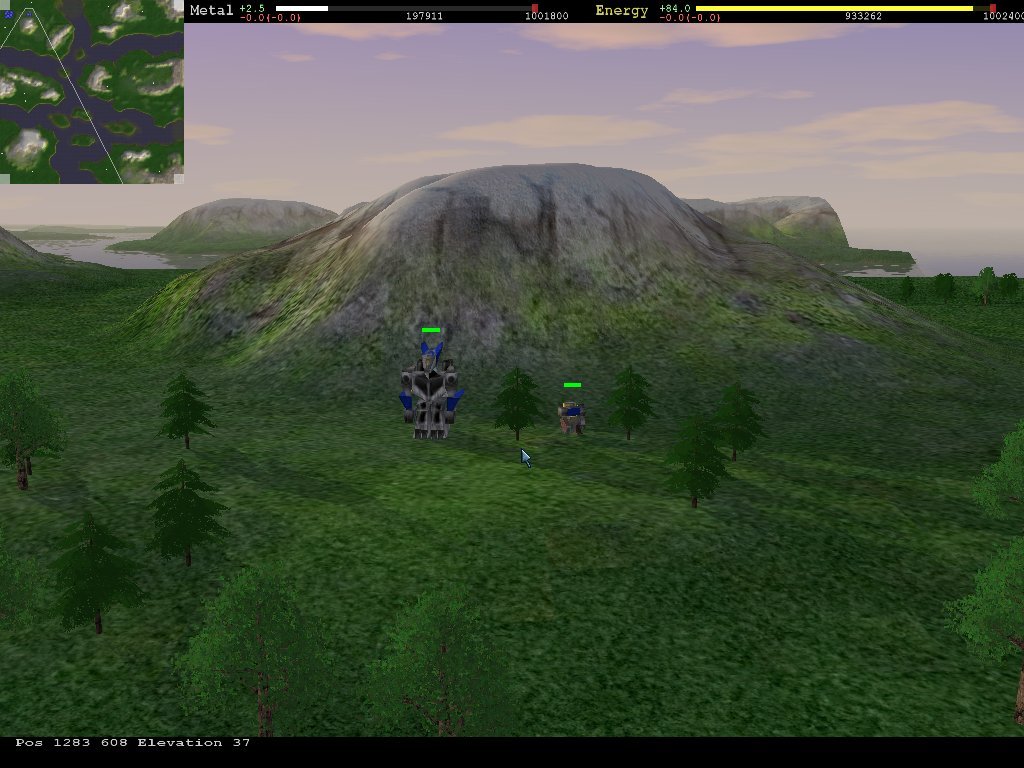 There's a scaled down comm and Krog with a tree directly between them on the Green Isles map, too lazy to go make a before shot

Instead of decreasing unit size, can't we juste increasing the map size with a less detailled texturemap/heighmap?
A make that the map maker can choose the scale of the feathure/tree.
Like that you can make little and beautiful map or epic map, but a bit less detailled.

Can lil' Mr. Kroggy still push down trees? (I love that effect)

If so, I'll seriously have to think about looking into this idea with more detail as far as source goes. It must go deeper than the few changes done to the source... it can't be THAT simple

Torrasque wrote:Instead of decreasing unit size, can't we juste increasing the map size with a less detailled texturemap/heighmap?
A make that the map maker can choose the scale of the feathure/tree.
Like that you can make little and beautiful map or epic map, but a bit less detailled.

It's just a raw idea.

Actually this setting makes out the difference between big polygoned buildings and terrain really well. Making it to look good. It's no use to increase map size. It is faster and better way to lower unit sizes. I actually like that. (looking out for a mod dl link...)
0 x
Top

I gave a download link on the previous page.
0 x
Top

Does this mean I can half the sizes of all the textures?!?!?

Because if it does, that means we can have more of them :D

Just as my own thoughts on mini spring... Id rather that it was an actule engin change so that everythiung was a little smaller and have that as the way its ment to be. I dont like the idea of some people having mini spring and others having standered spring... That makes map making harder because you have to make it worth wile playing on both versions! If in the next release of spring evrything is smaller id have no probs though...

Why can't you make it so that you would be able to scale yourself which size of units do you do? By choosing the size of plant you are going to do. With big sized plant, you could also do smaller units but not bigger than the plant is.

If you want bigger units, they cost more but are ... uum. bigger and endurable.

It would be fun to make 20 times bigger peewees and then use them to attack mini-krog. :D
0 x
Top

Cheery, whilest i promised myself id never shun others ideas as stupid...

Sorry but that would just sux

Although i can see where your coming from... It would look halerios on screen...

aGorm, this is an engine change....note Gnome's download is a new spring.exe, instead of a .ufo file with smaller models.

I didn't acctully say it wasn't i just said if it was going to be included then thats how it should be... no need to get flustered!!

However, I'm heavly against all attempts to change Spring to the horrible black gui, its Naf, I dont get how/why some people are going well done for that.

I hold the same opinion on the GUI, except it's the other way around... the transparent one just pissed me off and got in the way constantly.

I'm still looking into making Spring read GUI data from an ini file so the user can set custom widths/positions/colors/transparency/etc himself. My file I/O skills aren't what they once were, though, so it's a slow process...
0 x
Top

Eh, those wookies and storm troopers in the grass look very nice and to scale! At least for SWTA, this should be the default size.
0 x
Top

It does make everything look a lot better. This needs a new prefix in the lobby though